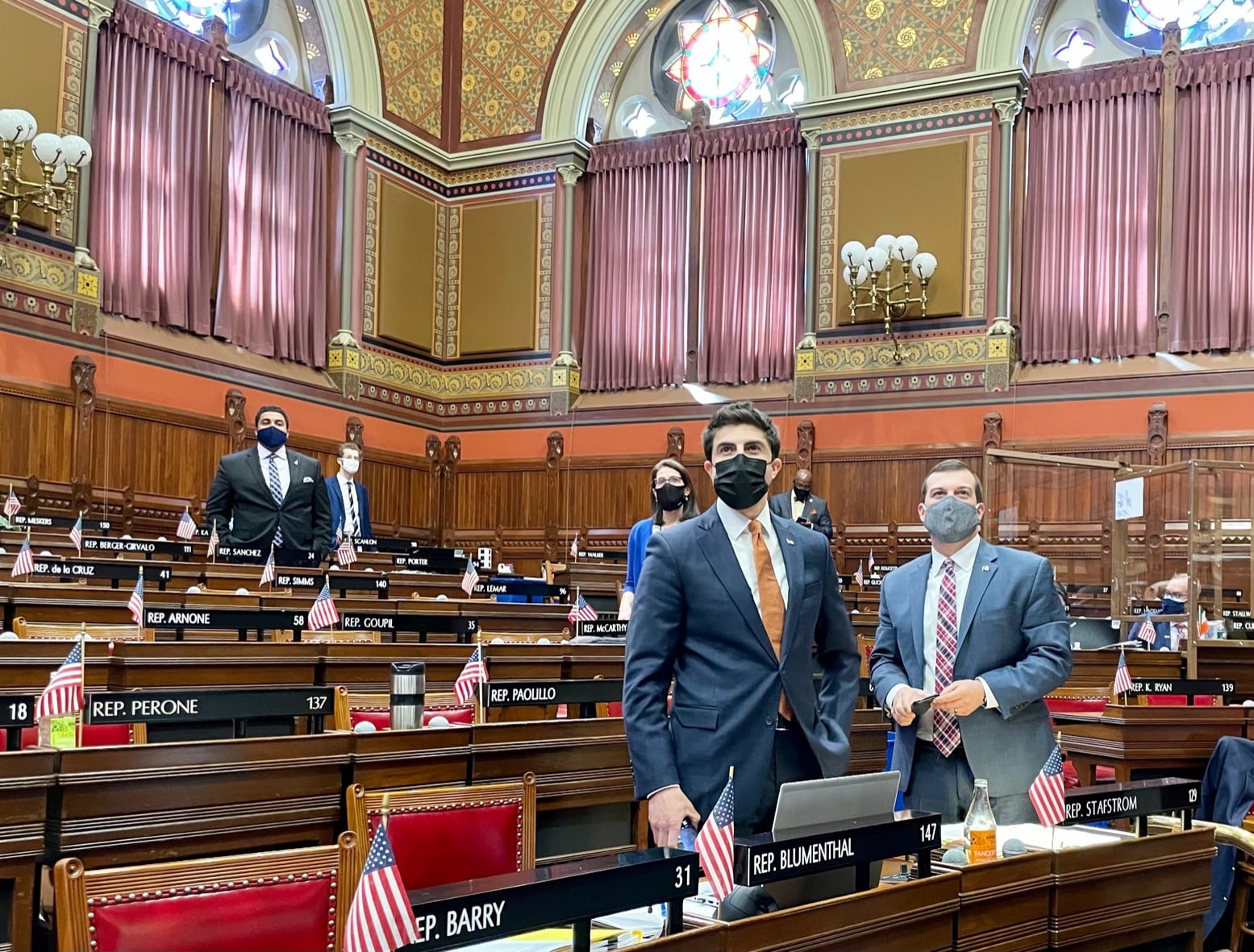 From left to right, Reps. Matt Blumenthal and Steve Stafstrom watch the votes tallied for the risk-warrant update.

The House of Representatives voted Wednesday for legislation that would expand Connecticut’s “risk warrant” or “red flag” law, a first-in-the-nation statute that became a model for seizing firearms from at-risk individuals before violence occurs.

A pacesetting concept when adopted in 1999 in response to a mass killing at the Connecticut Lottery, the new legislation borrows from versions crafted in other states in the intervening decades.

The current law created a process for law enforcement officials to get a court order seizing firearms from individuals deemed an imminent risk to themselves or others. The warrants expire after a year, requiring authorities to return weapons.

The updated version would allow the weapons to be held in perpetuity if deemed necessary, permit police to seize weapons other than firearms and bar the subject of a risk warrant from purchasing new firearms while the warrant is in effect.

A study published in 2017 by researchers from Duke, Yale, UConn and the University of Virginia found that six subjects of risk warrants committed suicide after the one-year ban expired and their weapons were returned.

Rep. Greg Howard, R-North Stonington, a police officer elected last year, said he would welcome an end to the one-year limit, and he described his unease at returning firearms to people once deemed to be a threat.

But he called the procedural changes flawed. Rather than only law enforcement officials, the legislation would allow medical professionals, relatives and intimate partners to apply for a risk warrant, but the police would then investigate.

Howard urged defeat, as did Rep. Craig Fishbein, R-Wallingford, the ranking Republican on the Judiciary Committee.

“I think the process as it presently exists works,” Fishbein said.

Under the current law, the legal standard for seizing weapons is relative low — probable cause of imminent risk. To keep the firearms, the standard to be met at a hearing within 14 days is higher — clear and convincing evidence.

The proposed legislation would retain a probable cause standard for orders sought by police or prosecutors but a lower reasonable-belief standard for medical professionals and others. Howard called the change “convoluted.”

The Republicans in favor: Kathleen McCarty of Waterford and Holly Cheeseman of Niantic. The Democrats opposed: Jill Barry of Glastonbury, Pat Boyd of Pomfret, Michael DiGiovancarlo of Waterbury and Kerry Wood of Rocky Hill.

The risk warrants initially were a little-used tool, with only 20 issued annually in the first five years. Other states were slow to follow, first Indiana in 2006 and then California in 2014. There now are 19 states with risk-warrant or red-flag laws.

Most of them allow family members and medical professionals to seek the seizures, a provision sought this year in Connecticut by Sandy Hook Promise, the gun-control group created after the school massacre in Newtown.

“It is time to update Connecticut’s risk warrant law to empower families,” Mark Barden of Sandy Hook Promise told lawmakers in public hearing testimony. “Let’s give them a powerful tool that takes a balanced approach to firearm ownership, the wellness of those with access to firearms, and public safety.”

The House voted 95-49 for final passage of a bill that would put an end to “prison gerrymandering,” a practice that places incarcerated people into the legislative districts where they are imprisoned. The measure affects only how legislative districts are apportioned and is not factored into funding formulas.

The bill passed nearly unanimously in the Senate, but it provoked a partisan split in the House.

Currently, the incarcerated are considered residents of their correctional facilities. Considering the racial makeup of the incarcerated population, of which 44% is Black and almost 28% Hispanic, advocates contend this practice reduces the political power of voters of color, denying them meaningful representation and ultimately hurting their communities and families.