Office of the governor.

Gov. Ned Lamont marked the availability of vaccines as a turning point in a difficult journey.

With infections comfortably low and vaccination rates enviously high, Gov. Ned Lamont bid farewell Thursday to his twice-a-week televised briefings about gains and losses in the 15-month struggle to mitigate the impact of a novel coronavirus on Connecticut’s health, economy and politics.

Lamont, 67, a first-term governor whose political standing soared during the pandemic, was in a celebratory mood yet alert to the dangers of declaring victory over a viral foe that has been subdued, not eradicated.

With a quick reference to one of the most infamous victory celebrations in modern politics, Lamont tried to inoculate himself against a perception he was leaving the field prematurely, confident of victory before the final out.

“George W. Bush got on the aircraft carrier in what turned out to be the third inning of the war in Iraq, and he had a big ‘Mission Accomplished’ sign behind him,” Lamont said. “Are we being a little premature here? Or do we think with vaccinations, we have turned the corner?”

He posed the question to his guests, who included a COVID celebrity: Dr. Scott Gottlieb of Westport, a former Food and Drug Administration commissioner with a knack for simplifying and interpreting the pandemic, making him a ubiquitous presence on television. Gottlieb has become an informal adviser.

With three deaths, the toll attributed to the disease is now 8,230 lives. Connecticut suffered grievous losses in the pandemics early months, when New Jersey, New York and Connecticut were its epicenter and the disease spread through nursing homes. Its per-capita death toll is in the top 10 of states.

With more than half of state residents fully vaccinated, Connecticut consistently has ranked as the highest or among the highest states for inoculating against COVID. Nationally, 40% are vaccinated. 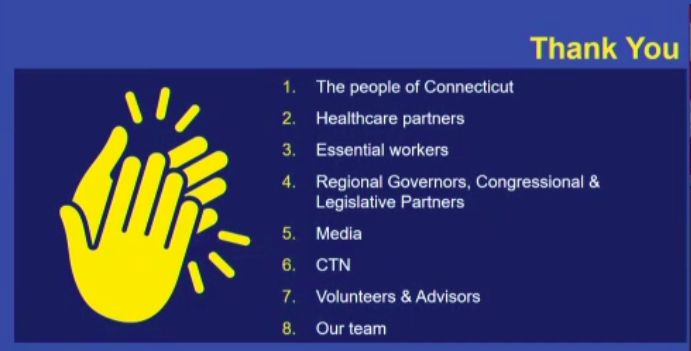 If Lamont was careful not to take a bow, there was a graphic of hands clapping in applause as he thanked Connecticut for responding to his calls for social distancing, the wearing of masks and vaccinations.

The tone was light.

Among those he thanked was CT-N, the network that streamed his briefings online and broadcast them on cable, and his interpreter for the deaf.

“I’m curious to see how she describes me describe her as a signer,” he said, then turned to her and added, “I’d like to see how you sign hydroxychloroquine.” She did.

Gottlieb and Dr. Albert Ko, the Yale epidemiologist who co-chaired the governor’s advisory committee on COVID restrictions and reopening, gently disagreed on how long the vaccinations will be effective before needing a booster shot. Ko thinks a year, Gottlieb thinks less than a year, and both agreed that more data will provide a clearer picture. Both men could be seen glancing at their phones.

Everyone said work remains to be done.

At 36%, the vaccination rate of Black residents lags other population groups, though Connecticut ranks sixth nationally in providing one of the three available vaccines to African Americans. Lamont said work remains.

Josh Geballe, the state’s chief operating officer, said the state will continue to examine what works and what doesn’t.

“We’re experimenting,” Geballe said. “One example is we’ve had canvassers knock on doors in under-vaccinated communities. The yield’s been OK, it hasn’t been great. So we’re going to pivot some of those canvassers to go where people already are — crowded stores and bus stops at events, and go person-to-person at those events and talk to them there, where they’re already gathered, rather than go door to door.”

“We’re gonna keep going,” she said. “And we’re not going to let up until everyone has their questions answered, everyone has the information that they need, everyone knows where and when they can get a vaccine. You’ve got to keep asking the question of our partners in the community, ‘So what do you need that might be different from what we’ve already tried?’”

Gottlieb, who departed the Trump administration before the pandemic, said most of those still unvaccinated are doing so by choice — some skeptical about the government advice on vaccines and others who are healthy, confident they are not at risk, and asking, “Why should I get vaccinated?”

“One of the answers is that by getting vaccinated, you’re going to substantially reduce the risk that you can become someone who’s infected and goes on to infect other people,” Gottlieb said. “If you’re around young kids or you’re around older individuals who you want to protect, if you’re vaccinated, you’re going to be protecting that individual that you care about.”