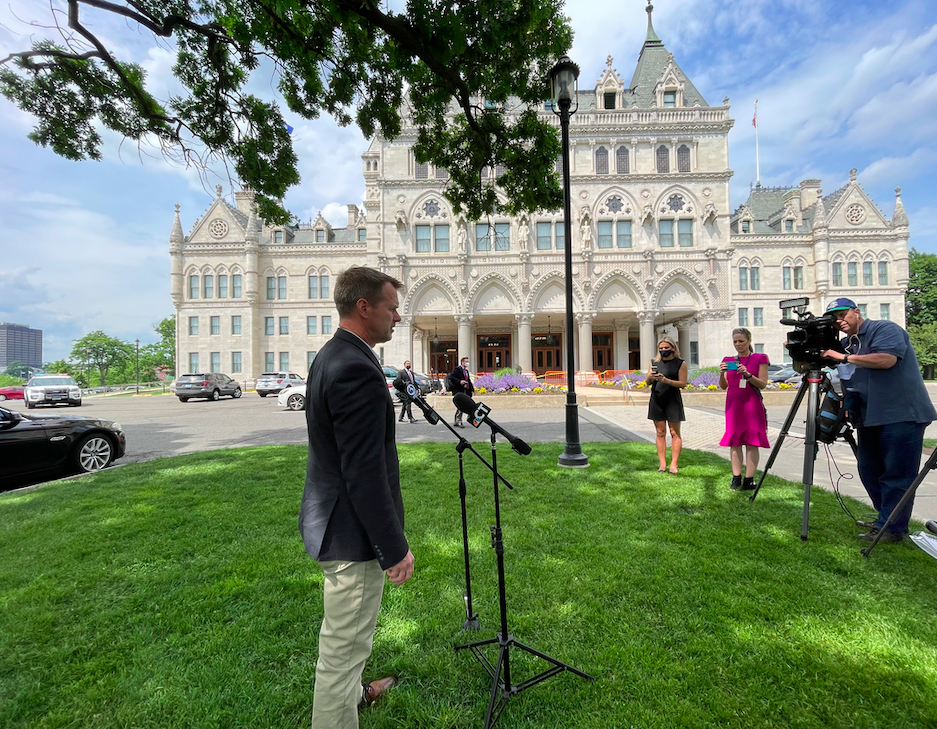 Brian Foley, a spokesman for the Department of Emergency Services and Public Protection, talks to reporters outside the Capitol on Wednesday. Three gunshots damaged two first-floor windows and a lamp under the archways, at left.

State Police on Wednesday connected the shots fired at the state Capitol over the holiday weekend to the wild shooting spree in Southington that ended Sunday evening with the capture of a 74-year-old man on the Arrigoni Bridge in Middletown.

Physical, video and audio evidence collected by police allow them “to definitively say that the shootings here over the weekend are directly tied to the shootings in Southington. That person is in custody at this moment in relation to that,” said Brian Foley, a spokesman for the Department of Emergency Services and Public Protection.

Foley, who spoke to reporters outside the Capitol, declined to name the man in custody, who has not been charged. But Southington police have identified the man arrested on the bridge as Douglas Floyd Gollnick of Southington. He was hospitalized for psychiatric evaluation.

Gollnick was arrested after a chase by police investigating a series of incidents in which shots were fired at at least seven locations in and around Southington. Police recovered a .22-caliber rifle in his Silverado pickup truck.

Lt. Keith Eagan of the Southington police said Gollnick was charged on assault and firearms offenses in two of the incidents, and the five others remain under investigation. Gollnick, who was under police guard in a hospital, has made no statements to police.

Eagan said police believe the shootings were directed at people he knew, but they have no motive.

Gunshot damage to two windows and an exterior lamp on the side of the Capitol facing Capitol Avenue was discovered Tuesday morning.

The area is well-covered by surveillance cameras.

Foley said investigators have video evidence and also recovered bullets or fragments from the Capitol.

Hartford has a ShotSpotter audio system that did not trigger an alert, which is to be expected if a gun had been fired from inside a motor vehicle, Foley said.

“That was likely the case here. But ShotSpotter has abilities to go back in time and reexamine based on lower audible levels, to really simplify it down, and determine when and where the shots were fired,” Foley said.

Foley said State Police and Capitol Police checked other state buildings for damage from gunfire, and Hartford Police did the same at city buildings. No further damage was found, he said.

Connecticut's reapportionment will test whether technology can bring public participation to a process controlled by political insiders.