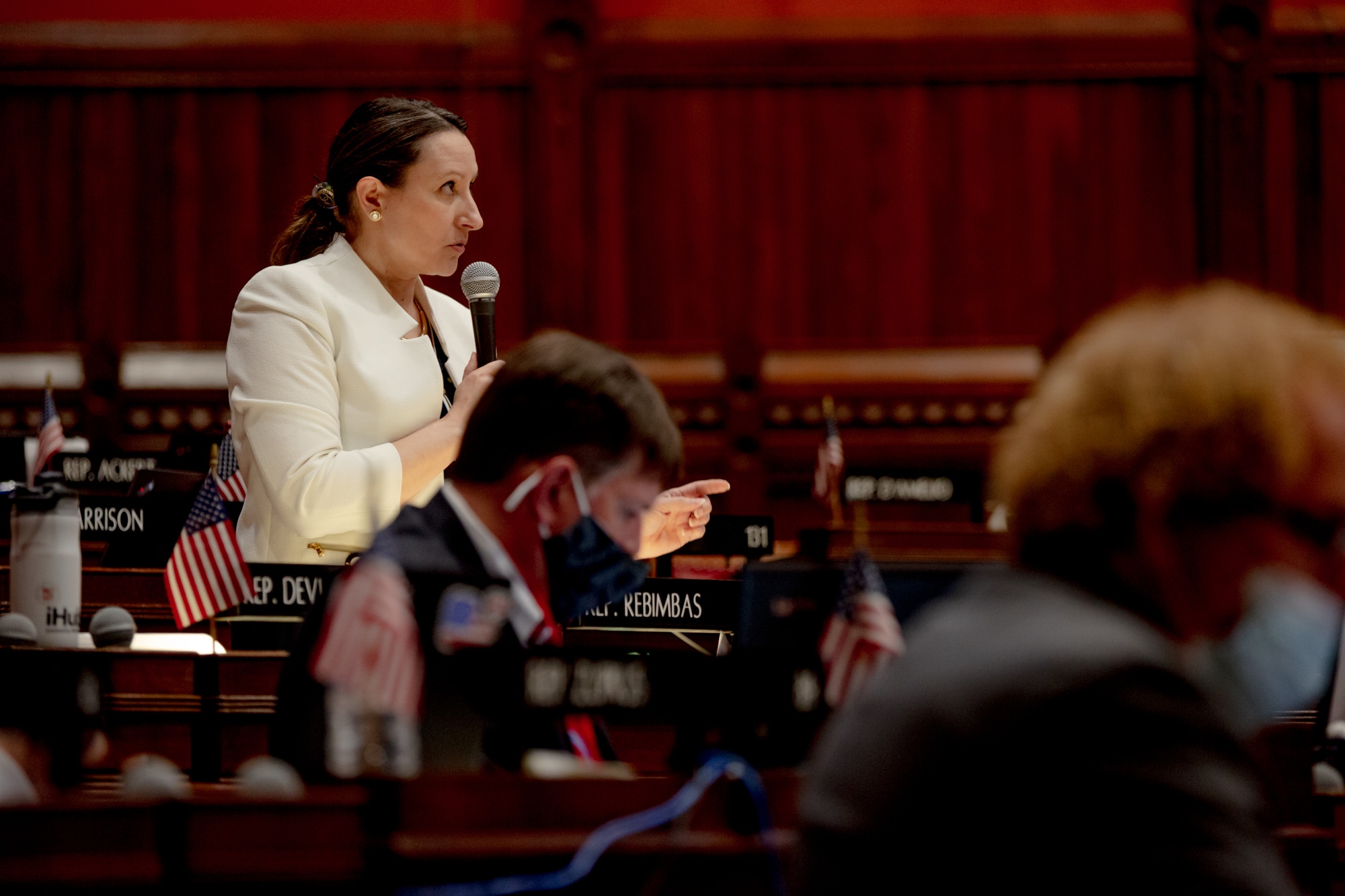 Rep. Rosa Rebimbas, R-Naugatuck, speaks against Senate Bill 2, an an Act Concerning Social Equity and the Health, Safety and Education of Children during the discussion on June 2, 2021.

The state House of Representatives gave final approval Wednesday to legislation aimed at addressing the impact the COVID-19 pandemic has had on students’ mental health and education.

One of the key components of Senate Bill 2 would expand mental health services and interventions for kids by implementing suicide prevention training in local and district health departments that will be administered by the Office of the Child Advocate and the Youth Suicide Advisory Board once every three years starting July 1, 2022.

Throughout the pandemic, health care providers have not only seen an increase in the number of school-aged children showing up to pediatric emergency departments seeking psychiatric care, but they have also seen a high volume of patients over the last several months with more acute illnesses — including those at high risk for suicide.

“What we have learned in the last 14 months or so is that children have been the victims of this pandemic as well,” said Sen. Saud Anwar, co-chair of the children’s committee and a co-sponsor of the legislation. “This is evidence-based, this is based on reality and our immediate responsibility to take care of our children and their needs in the state of Connecticut.”

Children’s Committee Co-Chair Liz Linehan, D-Cheshire, explained to the House on Wednesday that the “Question, Persuade and Refer” (QPR) program this training is modeled after is “known as the CPR of suicide prevention.”

Local health officials will determine who is eligible to participate in the training, according to the bill’s language, but examples include health department employees, school employees, volunteers and employees at youth organizations, social service workers and members of fire and police departments.

“This is a train-the-trainer model, and what we will be doing is training people to become trainers so that we will ultimately have a wide web of people who are able to QPR,” Linehan said.

The legislation would also implement mental health training and education for health care professionals — including physician assistants and behavioral analysts — starting Jan. 1, 2022, and would allow K-12 students to take up to two mental health days during the school year. If a district already has days in place, this legislation will add to that.

After a six-hour debate, the bill passed on a 112-34 vote, with overwhelming support from Democrats. All but 18 of the 54 Republicans in the house voted against it. Republicans brought forward amendments to the legislation during Wednesday’s debate that included changes to address recent legislation repealing the religious exemption from mandatory school vaccinations and another aimed at addressing young people stealing cars. Both failed to move forward, along with two motions to refer the legislation to the public health committee and education committee.

One of the arguments Republicans raised against the legislation is that it would change an existing state statute that allows psychiatrists, psychologists, social workers or family therapists to provide outpatient mental health treatment to a child without notifying their parents for no more than six of the child’s visits. This bill would remove the limit.

“We’re setting a standard with regard to who gets to decide what’s in the best interest of the child, and that’s where I have a difficulty with this piece of the bill, expanding those visits and continuing that,” said Rep. Anne Dauphinais, R-Killingly — who also brought up this concern last week when the House approved a bill to expand school-based mental health clinics.

But proponents of the bill explained on Wednesday that this is not aimed at removing parents completely from their child’s health needs, but it instead is a way to allow kids who are in situations that are “detrimental to the minor’s wellbeing,” like being in an abusive household, to consent whether they want to notify or involve their parent or guardians while receiving treatment.

Linehan added that this bill allows providers to contact a parent or guardian if it’s for the child’s well-being, and minors are allowed to object.

In addition to addressing children’s mental health, the bill requires the state commissioner of education to set up standards, not regulations, for virtual learning. It will also allow school boards to authorize virtual learning in grades 9-12 starting next school year, as long as they follow the standards and attendance policies set by the state Department of Education. Part of the attendance policy includes counting a student participating in virtual learning as present if they spend “at least one-half of the day during virtual instruction engaged in virtual classes.”

The legislation would also make Birth-To-Three services, a statewide system to assist families of infants and toddlers with developmental delays, cost-free for Connecticut families, and it expands summer services through Birth-To-Three available to children who turned three on or after May 1 and before the start of the next school year.

Additionally, if Gov. Ned Lamont signs the bill into law, Senate Bill 2 would require schools to prohibit publicly identifying a child with lunch debt starting in the 2021-22 school year and allows a local board of education to receive “gifts, donations, or grants from any public or private source to pay off unpaid meal charges.”

“This is one of the most comprehensive bills, which is going to address a number of areas that have been very well recognized and highlighted during this pandemic, that have been in existence prior to the pandemic and, because they were so clear and identified even in more depth, we are looking at a comprehensive strategy to address them,” Anwar said. “And this bill just does that.”

The Senate passed the legislation at the beginning of May.

Judge rules in favor of governor in school mask lawsuit

The CT Freedom Alliance plans to appeal the ruling upholding the state's mask mandate for children to the Supreme Court.