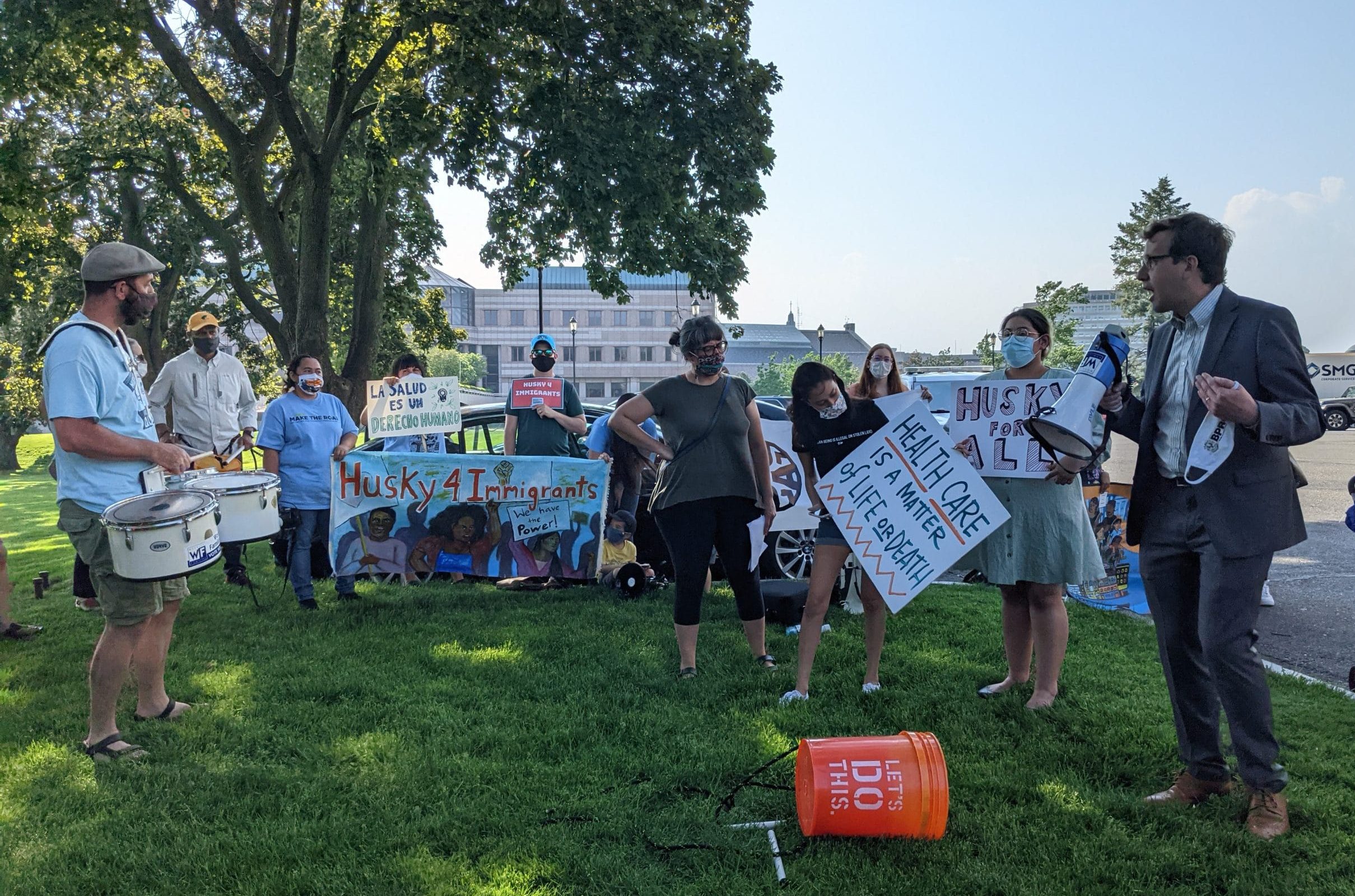 State Sen. Matthew Lesser, right, speaks at a rally outside the state Capitol calling on the General Assembly to provide insurance to undocumented immigrants.

Children eight years old and younger, regardless of their immigration status, will qualify for Connecticut’s Medicaid program, known as HUSKY, beginning on Jan. 1, 2023, after the state Senate late Tuesday gave final approval to a bill expanding the coverage.

The Senate passed the bill on a vote of 26 to 10. Two Republicans, Sens. Heather Somers and Paul Formica, joined Democrats in voting in favor. It cleared the House earlier in the day.

Lawmakers had talked for months about opening the HUSKY program to undocumented residents but the proposal that ultimately passed both chambers was not introduced until Monday afternoon, with a little more than 48 hours left in the regular session.

“Even without full citizenship, we have people who work, they pay taxes, they contribute to our economy, they are part of our communities and we want to make sure that they are not in the shadows,” said Senate Majority Leader Bob Duff, D-Norwalk. “One of the issues that has long escaped our country because of a failure to pass immigration reform or immigration policy is health care, especially for those who are undocumented. We know that if somebody shows up at an emergency room or a hospital, they’re going to get care, but we know that that care is extremely expensive and that it’s borne by all of us in the state of Connecticut at a much higher rate than if we were to take a more proactive step.”

Additionally, the measure directs the Department of Social Services to study the feasibility of extending HUSKY coverage to children, regardless of immigration status, from ages nine to 18, and to adults whose households earn up to 200% of the FPL.

The bill was amended on the House floor from its original version. In the first draft, the program for children eight and younger would have started on Jan. 1, 2022. It also asked the social services department to develop four-year plans to extend HUSKY to children ages nine to 18, regardless of immigration status, and to adults whose household income does not exceed 200% of the federal poverty level.

Advocates said they were happy with the bill but upset about the delay in implementing the program.

“We’re extremely proud that the state has taken the first step to insure a portion of its most vulnerable population – undocumented children eight years of age and under,” said Jay Sicklick, deputy director of the Center for Children’s Advocacy. “This is a bold initiative that is long overdue and very much needed.

“At the same time, we are also disappointed that what at first appeared to be a robust and imminent coverage program has been delayed one-year and that a commitment to expand coverage to all children under eighteen has been changed to a ‘feasibility study.’ If the state is truly committed to providing meaningful access to all if its children and youth, then it should make expediting this coverage plan a priority.”