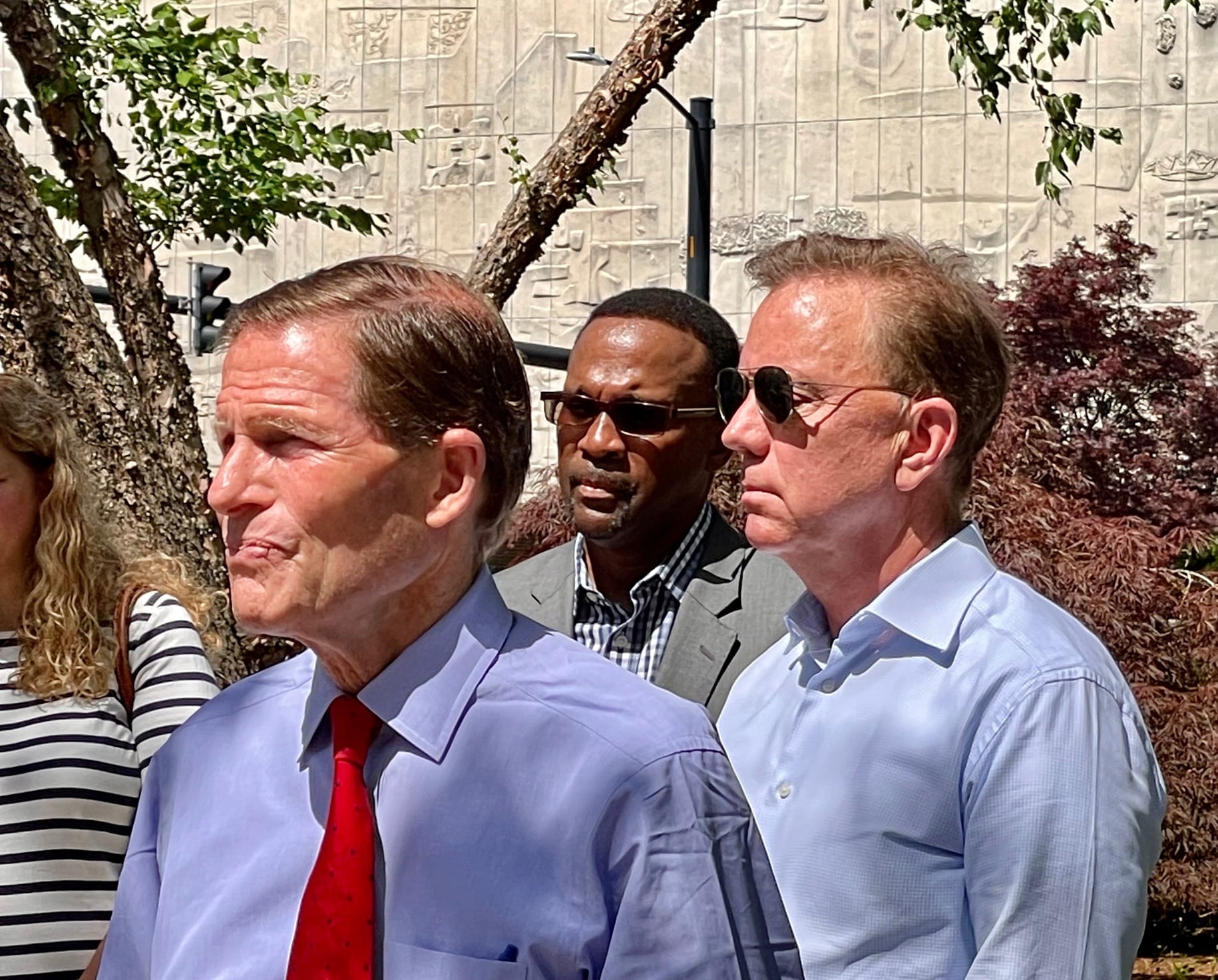 It is a rite of summer. Officials gather outside an urban hospital to talk about crime and violence. Sirens sporadically intrude. There’s a young trauma surgeon in a white coat, and a community activist, the latter always a person of color. It’s like casting a TV show.

“It is, it is cast,” said Andrew Woods, 60, a person of color and very much a community activist, the founder and director of a non-profit, Hartford Communities That Care. He also helps run a hospital-based violence intervention program.

The governor, a U.S. senator, a mayor, state lawmakers and others played their roles Monday outside St. Francis Hospital and Medical Center in Hartford, a familiar spot chosen to outline the latest approach to addressing the crimes that inevitably spike with the temperature, even more so as COVID-19 cases shrink.

“While I’m proud that Connecticut is one of the safest states in the country, we are not immune, we are not an island,” Gov. Ned Lamont said. “And I see what’s happening in other cities and states, and our violence is spiking up as well — in particular, gun-related violence.”

The Lamont administration highlighted $5 million in federal funding for crime reduction. It’s a relatively modest sum taken from unallocated federal Cares Act funds, a necessity driven by the legislature delaying until the fall how Connecticut will allocate its much larger pool of funds coming through ARPA, the American Rescue Plan Act.

The press conference outside the hospital came five days after the Biden administration outlined the use of ARPA funds to address increases in violent crime, including a jump in homicides in the first three months of 2021 — up 24% over the same period in 2020 and 49% in 2019. No Connecticut city, however, is among the 15 jurisdictions that Biden has singled out for help with community violence intervention programs.

Biden also has promised to change Medicaid rules to allow the reimbursement of services provided by certified violence prevention professionals.

Woods, an invited speaker, greeted the announcement with a mix of frustration and gratitude. Some of the $5 million — exactly how much is yet to be determined — will be available for violence intervention programs like the ones run by Woods. Financial support tends to wax and wane for prevention programs.

Woods was more encouraged by Lamont’s recent signing into law Public Act 21-36, a measure passed unanimously by the General Assembly. It is intended to make Connecticut the first state to avail itself of the Medicaid change promised by the Biden administration.

The policy change is the marriage of violence-prevention and health-care cost containment, given that the vast majority of gunshot victims are not covered by commercial health policies, Woods said.

“So who picks up the bill? The taxpayers,” Woods said.

Marc Pelka, the governor’s undersecretary for criminal justice policy at the Office of Policy and Management, said the CARES Act funds will go to a range of community violence prevention efforts, as well as forensic tools and incentives for regional approaches to crime.

“We’re talking peer navigators, peer support specialists, harm reduction outreach, so many organizations we know in Hartford, doing that critical work, and New Haven, Bridgeport, Waterbury and so many others,” Pelka said.

Pelka said the cities are hardest hit by the increase in gun violence.

“In Connecticut, 56% of gun violence victims are black people, five times the population residing in this state. And also in Connecticut, young black men are 39 times more likely than white men to be slain with a gun,” Pelka said.

James Rovella, the commissioner of the state Department of Emergency Services and Public Protection, acknowledged the frustration of police chiefs at the repeated arrests of juveniles.

“Do we have the tools? I believe that we can develop those tools presently. We need more prevention with those folks, more education with those folks. And ultimately, some of those juveniles are going to spend some jail time,” Rovella said. “Most of the chiefs that I’ve spoken to around the state, they didn’t get their bracelet that they wanted to track … those folks with second and third offenses. That’s something for the legislature and us to continue to work on.”

About one-third of people arrested for auto theft are juveniles.

The Biden and Lamont administrations are trying to acknowledge a spike in crime and attendant government response without undermining America’s long reckoning with the consequences of mandatory minimum sentences and other policies from the 1980s.

“So, for perspective,” Pelka said, “the amount of serious crime is at half the level it was in the 1990s. But the increase in violence in our communities is unacceptable.”

The crime rate had been falling steadily in Connecticut, contributing to a reduction in the prison population. Lamont said the recent increase is not cause to reverse course and seek tougher sentences.

“There are no simple, easy answers. The crime rate is spiking up a lot more in places like Georgia and Mississippi, where they lock them up and throw away the keys,” Lamont said. “So I’m not going to fall for any simplistic solutions, but also remind people we take this very seriously, and that’s what we’re doing today.”

“Crime is an ecosystem. We’re not going to arrest our way out of this uptick in crime,” said U.S. Sen. Richard Blumenthal, D-Conn.

Blumenthal called the $5 million a small investment in prevention.

“The most important thing about this $5 million is that it sends a message,” Blumenthal said. “It won’t accomplish everything you’ve heard today. We need much more money from the federal government to accomplish those goals.”

“We all know that the crisis we’re seeing here in Connecticut and across the country is deeply rooted. It is not simple,” Hartford Mayor Luke Bronin said. “And tackling it requires us to partner at every level and in every way — federal, state, local, public and private, community and law enforcement.”