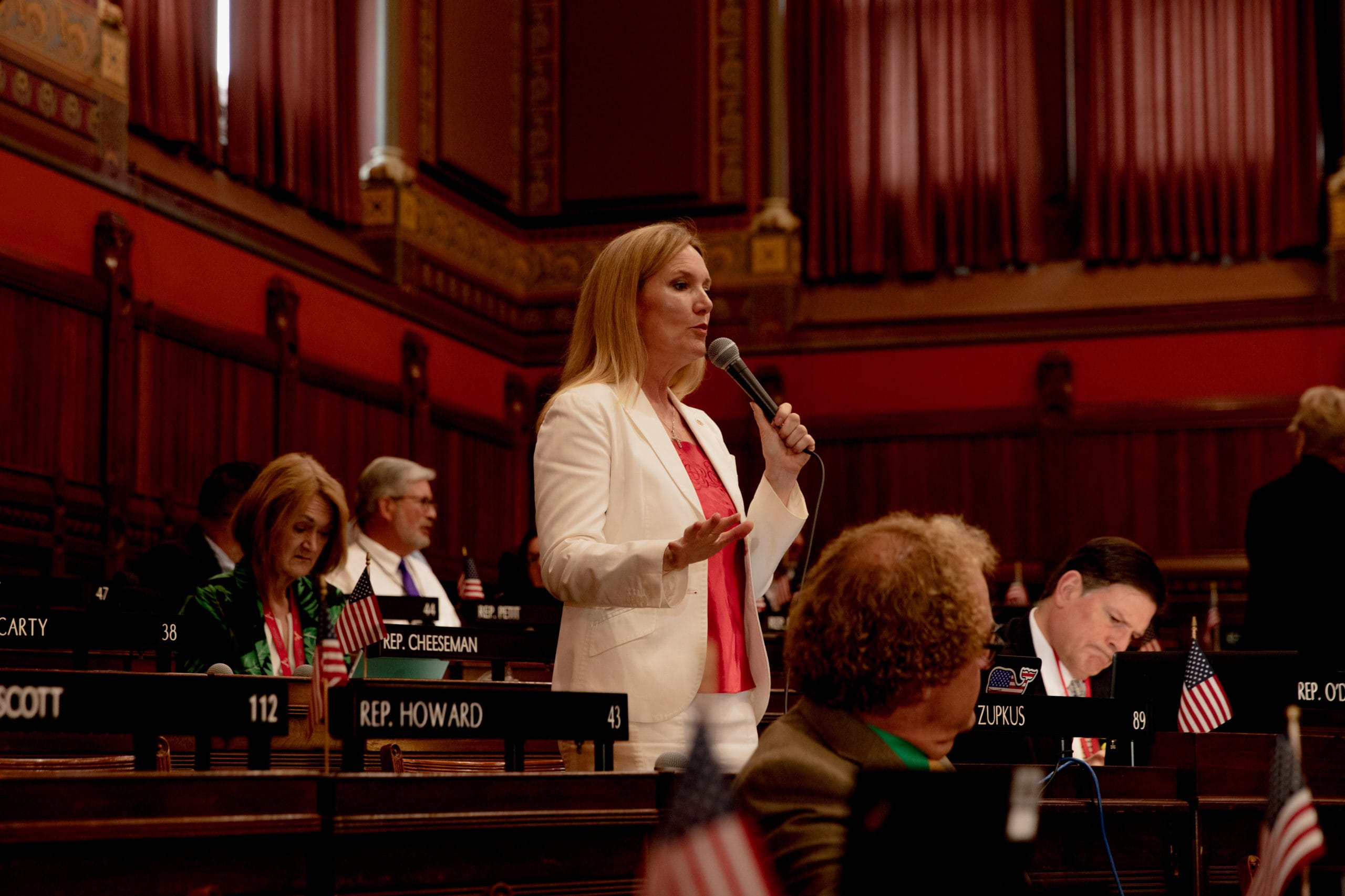 Rep. Lezlye Zupkus, R-Prospect, speaks about her daughter having chronic headaches after wearing a mask at school. She argued that parents should decide whether their children wear masks in school this fall.

The General Assembly voted Wednesday for a 44-word resolution extending Gov. Ned Lamont’s emergency powers through Sept. 30, making Connecticut among the last in the northeast under a COVID-19 state of emergency.

Lamont has lifted nearly all restrictions imposed under his emergency authority since March 9, 2020, with the most visible and contentious exception being a requirement for mask wearing by the unvaccinated in schools and other indoor public places.

Passage came on votes of 73-56 in the House and 19-15 in the Senate, with nine House Democrats and four Senate Democrats joining the GOP minority in opposition — the strongest evidence to date of internal opposition to the Democratic governor over his powers.

Infections, hospitalizations and deaths have plummeted in Connecticut as the state conducted one of the most successful vaccination campaigns in the U.S., but the administration noted that the positivity rate in COVID tests reached 1.28% on Wednesday, the highest since May 25 and first time exceeding 1% since June 1.

The governor sought the extension to continue 11 of the 300 emergency orders in effect at the height of the pandemic, most that Lamont sees as ministerial measures allowing flexibility in purchasing, qualifying for federal funds and standing up vaccination clinics.

“These orders are still needed to protect the public and continue critical measures to provide healthcare access and economic relief and respond to evolving changes,” Lamont said in a message to lawmakers. “They are also narrowly targeted to achieve specific goals that would otherwise be unachievable because of statutory or regulatory barriers that were not contemplated in the context of a highly transmissible and long- lasting disease outbreak when the statutes were passed.”

Other states have ended emergencies, though some such as New Jersey have given their governors narrowly drawn temporary powers, an approach that Republicans say would have been preferable to an extension of powers that allow Lamont to set aside state laws and impose new ones via executive orders.

House Minority Leader Vincent J. Candelora, R-North Branford, said he was frustrated by the governor’s viewing the emergency powers as all or nothing.

“It’s been treated like a light switch — it’s either on or off. And we would have liked some kind of a medium throughout this process, a dimmer switch,” Candelora said. “Because I don’t believe that we are in a state of emergency, such that the governor should have these extraordinary powers.”

Democratic leaders said the extension was prudent and that a legislative committee retained the power to veto new executive orders.

“I’m glad that this passed. We’ve seen the Delta variant in this state,” said Senate Majority Leader Bob Duff, D Norwalk. “It is increasing our infection rates here in the state. Even though we have high vaccination rates, we’re not done with this pandemic.”

On that final point, there was significant Republican agreement. In fact, many in the GOP took pains to distance themselves from national Republicans who questioned whether COVID-19 was real or still a threat. More than a few complimented Lamont.

The issue, they said, was whether an extension of his full emergency powers was necessary.

“In this case, we think the governor has gone too far,” said Rep. David Yaccarino, R-North Haven, one of the Republicans who praised Lamont’s overall management of the pandemic. “Governor, you did a good job. Put the brakes on.”

At a rally on Monday, some speakers viewed the extension darkly, wondering if Lamont would mandate vaccinations against COVID-19. The governor has spoken forcefully against such a mandate, and his spokesman says that position is unchanged.

Connecticut has one of the highest vaccination rates in America, but no vaccine has been approved for children under 12, leaving Lamont and education officials to consider whether masks will be mandated by state or local officials in the next school year.

The current recommendation by the Centers for Disease Control and Prevention are masks for unvaccinated students. Despite Connecticut’s success, about 30% of residents are unvaccinated, and the pace of new inoculations has slowed to a crawl.

“This presents a serious public health risk, especially in light of new information showing that a full course of vaccination is necessary to protect against the newest variant,” Lamont wrote. The Delta variant is more contagious.

Republicans suggested that a continued mask mandate would generate opposition in the Capitol and beyond.

Two state senators with experience as business owners and small-town first selectmen, one from each party, endorsed the need for giving Lamont clear authority in the early months of the pandemic. Both said a crisis cannot be managed by committee.

But Sen. Norm Needleman, D-Essex, and Sen. Paul Formica, R-East Lyme, differed on whether they thought that authority still was needed. The Democrat did. The Republican did not.

Rep. Robyn Porter, D-New Haven, whose relationship with the administration and her own caucus leadership has been strained, said she was warned against voting against the extension.

“The last thing I want to say is something that has been really upsetting to me, and I feel a tremendous need to put it on the record: I know that some of us who have decided to vote ‘no’ are being told that, you know, there will be ramifications from the governor’s office if we vote ‘no,’” Porter told the House.

After the vote, Porter said no one from the governor’s office issued such a warning. It came, she said, from within her caucus. She declined to say from whom.

House Speaker Matt Ritter, D-Hartford, dismissed Porter’s comments, saying there will be no adverse ramifications for anyone.

The 13 Democrats casting no votes cut across geographic, racial and ideological lines.

In the Senate, Saud Anwar of South Windsor, Dennis Bradley of Bridgeport, Marilyn Moore of Bridgeport and Cathy Osten of Sprague.