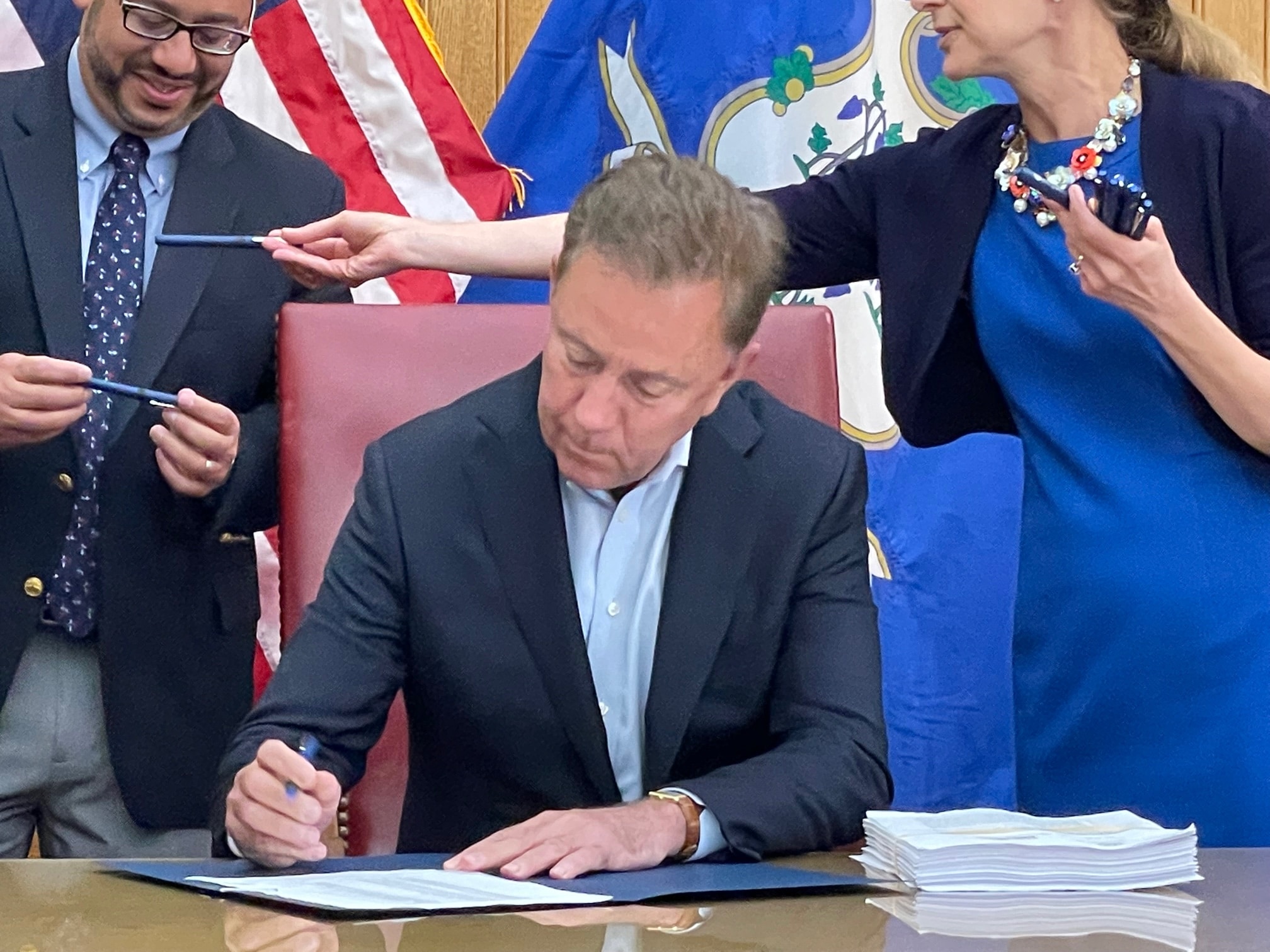 Gov. Ned Lamont signing the cannabis legalization bill into law. It was one of two passed in special session and 239 in regular session.

Gov. Ned Lamont has vetoed three more bills,  including a measure that would have conveyed property in Wolcott for less than its state-appraised value, and two other bills that the administration concluded could violate federal laws.

The vetoes, which were announced Tuesday night, came as the administration finished its review of the 239 bills passed during the regular annual session that ended June 9. The final tally was 235 signed into law and four vetoed.

House Bill 6678 directed the Department of Transportation to sell a 0.21-acre piece of land now leased for $251 a month to Daniel Wallas, who needs to cross the land for access to his property at 605 Wolcott Road.

“My administration has not been informed of any extenuating circumstances or other justification for turning over a taxpayer asset to a private interest for far less than market value for the property,” Lamont said in his veto message.

Senate Bill 1110 cut the sales price of land sold several years ago to the New Haven Port Authority to cover the cost of environmental remediation, but the Lamont administration said that would violate federal law.

The state had purchased the property with federal transportation funds, and federal law requires any subsequent sale to be for fair market value.

Senate Bill 940 requires state agencies to follow probate court decisions to which they were not a party, binding them to eligibility determinations for state assistance programs, including Medicaid.

“This requirement may violate federal and state law, pose a substantial risk of losing federal funds, violate a base principle of law, and result in increased costs that were not included in the budget,” Lamont wrote.

Lamont acknowledged that proponents argue that the bill merely codified a state Supreme Court decision in a case regarding the Department of Social Services.

But Lamont said the reach of that case was limited, while the vetoed bill was far-reaching.

“We have a system in place that works. There is no need to change it. The probate court makes binding decisions for issues that are within its jurisdiction,” Lamont wrote. “State agencies do the same for benefit eligibility determinations.”

The other veto came June 30. The bill would have set statutory limits on the use of solitary confinement in Connecticut prisons, instead issuing an executive order limiting the practice.

The governor also has signed two bills passed in special session this month — a budget bill and a measure legalizing recreational cannabis.