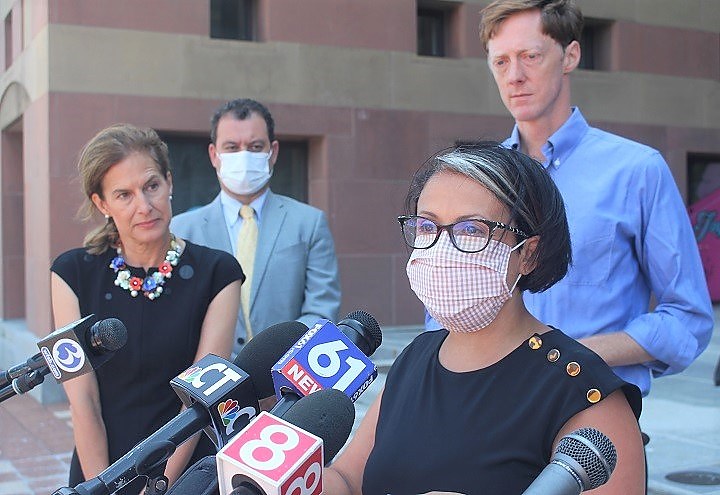 The Elicker Administration is “exploring” a vaccination mandate for city employees, and is strongly encouraging —though not requiring— that New Haveners wear masks while indoors in public places, regardless of whether they are vaccinated.

The focus of Friday’s presser was the end of the federal Centers for Disease Control and Prevention’s (CDC) nationwide eviction moratorium. City and state officials and local housing nonprofit leaders reminded renters across the city and the state that hundreds of millions of dollars in rent and utility relief remain available through the UniteCT program for qualified applicants. Hundreds of thousands of dollars remain in the city’s CASTLE renter and homeowner relief program, as well.

Given the recent uptick in Covid infections and hospitalizations in the region, state, and country, however, the latter half of the press conference focused instead on what the city is doing and can require to stem the spread of the highly infections Delta variant.

Asked if the city plans to impose a vaccination mandate for city employees, Elicker replied, “We’re exploring that at this point.”

Local, state and federal agencies have increasingly turned to vaccination mandates for public employees over the past week as the Delta variant spreads like wildfire. New York City and the state government of California are both requiring that public employees get vaccinated. So too has the federal Department of Veteran Affairs.

Asked what percentage of city employees are vaccinated, Elicker said the city is not allowed to track that information.

Bond stressed that the city and Griffin Health have free vaccination clinics available every day on the Green, on Long Wharf, and at Lighthouse Point Park. Getting vaccinated is the best way to protect oneself, one’s family, and one’s community from the novel coronavirus—especially from serious sickness, hospitalization, and death.

“Right now, there are no excuses,” she said. “Get out. Get vaccinated.”

That means that all New Haveners, vaccinated and unvaccinated alike, should wear masks when indoors in public places with other people.

“We have continued this policy all along at City Hall,” Elicker said about mask-wearing. Outside of City Hall, he added, “we very, very strongly encourage” people to wear masks indoors, “though we can’t require it.”

Why can’t the city require mask wearing at, say, restaurants and grocery stores and retail outlets, when the city did impose that very same requirement earlier on in the pandemic?

Elicker said that city attorneys’ reading of the a May executive order from Gov. Ned Lamont is that the city cannot impose a mask requirement outside of publicly-owned buildings.

“If it were up to me, I’d issue a mandate again,” Elicker said. But, deferring to city attorneys’ interpretation of the executive order, the state has “taken away our ability” to do that.

Bysiewicz said that the state Department of Public Health has also strongly recommended that Connecticut residents in counties with “substantial” levels of transmission—like New Haven—wear masks while indoors, regardless of whether or not they’re vaccinated.

This story was first published July 0, 2021, by the New Haven Independent.