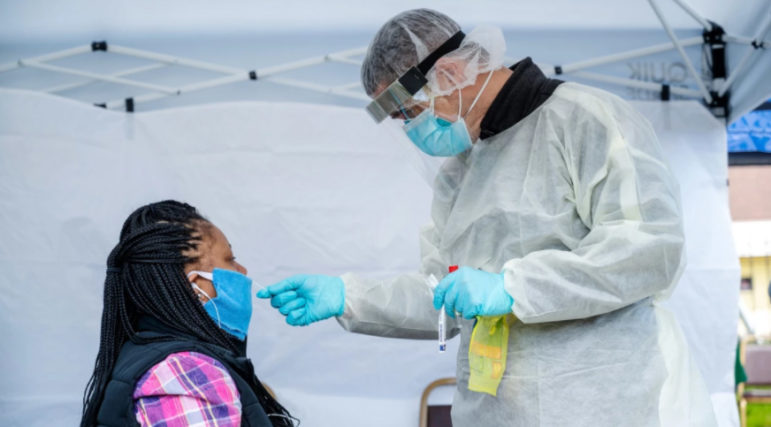 A year after keeping the price of taxpayer-funded purchases out of public view in an effort to protect private business, state Comptroller Kevin Lembo has changed course and released unredacted contracts between 10 vendors and the state for COVID-19 testing — one day before Connecticut Public was set to argue for the full disclosure of the documents before a state public records panel.

In response to a Freedom of Information request in 2020, Lembo redacted portions of these contracts and refused to say how much the state was paying for each individual COVID-19 test. Lembo said the price per test was a “trade secret” and that private vendors could take out what they charge taxpayers from a public contract.

Here’s what he said at the time: “The vendors get to, under the FOI law, decide what’s [a] trade secret,” Lembo said. “They have indicated that those areas around the unit prices are proprietary.”

On Tuesday, Lembo said in an emailed statement those same private vendors gave his office permission to release full versions of the documents.

“We are grateful that the vendors agreed to work with us, and ultimately reached the right conclusion — to unanimously withdraw their redactions contained in the contracts and avoid the need for an FOI hearing or any other unnecessary legal challenges,” Lembo said.

Lembo declined a request for an interview.

The redactions came at a very different time in the COVID pandemic. A vaccine was not yet available, and the state was pumping tens of millions of dollars into coronavirus testing as part of a major effort to control a virus that had ravaged parts of the state in the spring of 2020.

“The two options a year ago were we let the FOI process play out as written by law, or we engage in a multifaceted legal battle with these vendors that we were contracting to, essentially, almost invent COVID testing in Connecticut,” Tyler Van Buren, director of communications in Lembo’s office, said Tuesday.

“Obviously we chose to let that process play out under the FOI guidelines,” he said. “[We] were pretty adamant that if the vendors could get to a point where they felt comfortable releasing it, that is what we wanted.”

But Lembo’s office did not let the process play out under FOI guidelines. Instead, it released the documents one day before a scheduled FOI commission hearing on the matter.

Mike Savino, president of the Connecticut Council on Freedom of Information, said delaying the release of the documents for more than a year was a puzzling move from Lembo.

“He generally has been one of the rare champions of transparency,” Savino said. “When he did this, I was surprised that such a seemingly obvious matter of public information, that he would try to claim that it was exempt. That seemed out of character.”

Documents now released show the deals brokered by Lembo yielded a payout of about $130 million to private vendors. Lembo’s office said in a statement “some final invoices [are] expected to be received in the coming weeks.” Van Buren estimated that they would total around $13 million.

The state said Lembo’s office secured two rounds of reimbursement from FEMA to cover the costs of testing and “anticipates several additional grants in the future that will make the state whole.”

Contracts reveal the price per test charged to each vendor varied widely. In total, more than 1.4 million tests were purchased with an average price tag of $90.86, according to Lembo’s office.

Van Buren said the contracts with all of these vendors are now completed.

“With the contracts closed, there’s no more negotiating, so it made it more straightforward,” Van Buren said, referring to the full disclosure of the documents. “But those … determinations were made individually by the vendors.”

Savino said the full contracts should have been released months ago at a time when the public and legislators were much more interested in how the state was spending its money and who was winning major COVID-19 testing contracts.

“When you’re talking about how much the state is spending, the default position should always be that this information is public,” Savino said. “Any time a state agency or any public agency drags its feet on turning over information, obviously, one of the advantages that they get is that they hope the news cycle has changed, people care about this information less.”

This story was originally published by Connecticut Public on Aug. 3, 2021.