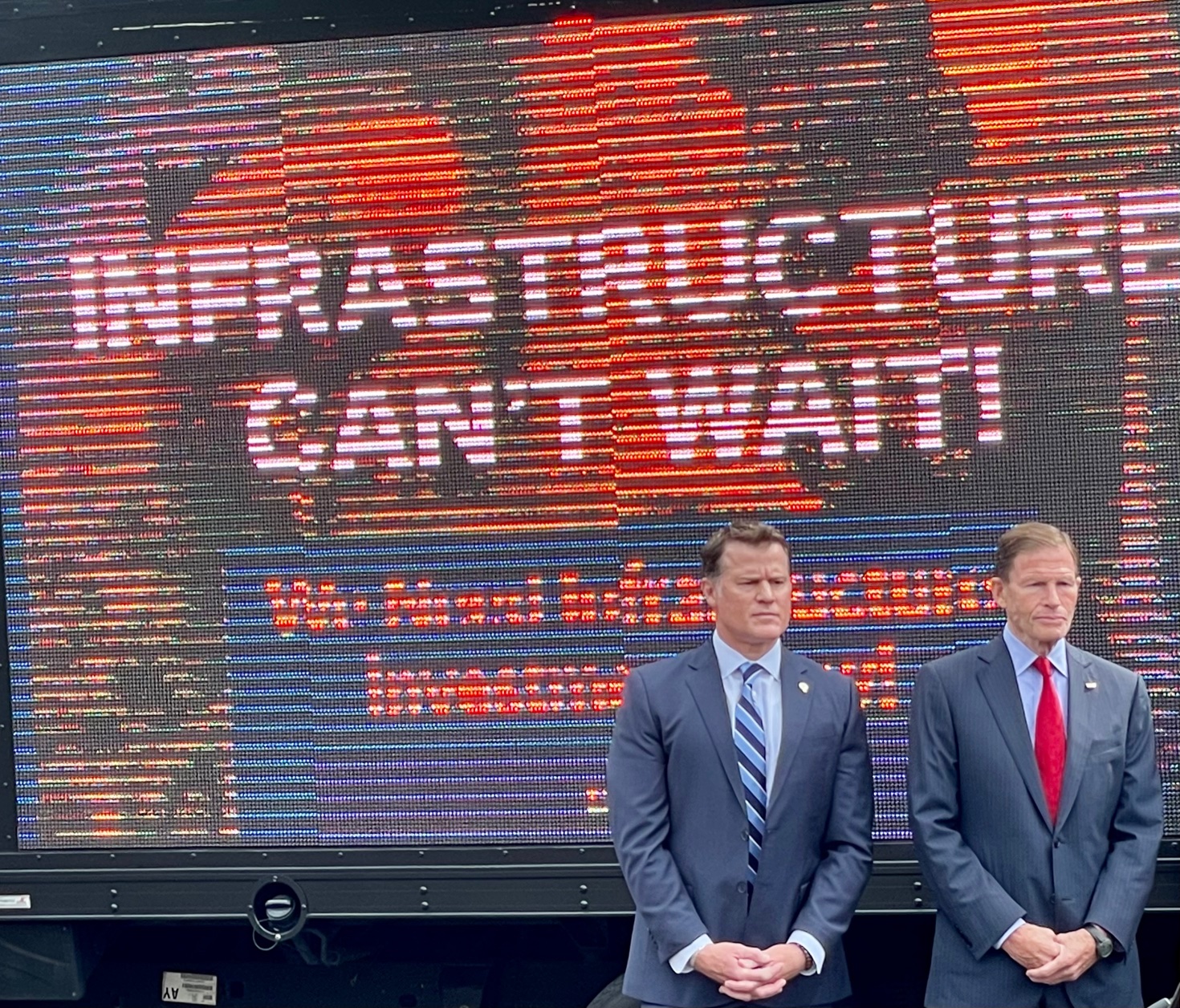 Keith R. Brothers, left, and Sen. Richard Blumenthal by a union message board on a truck. They waited to speak at a news conference Wednesday.

At a private meeting in a union hall in a scruffy Hartford industrial zone, a mounting crisis for organized labor in Connecticut was defused Wednesday as building trades leaders voted to remain affiliated with the state AFL-CIO.

“We’re going to continue to be a part of that organization and continue to move on our agenda, along with their agenda, and get things done,” said Keith R. Brothers, a Connecticut Laborers’ District Council leader. “We are not going anywhere.”

The vote was welcome news for a labor movement that can ill-afford defections, but the need for a formal affirmation underscored long-simmering tensions between the conservative trades and a federation dominated by progressive public-sector unions.

The struggle of the AFL-CIO to maintain political and cultural diversity mirrors to a degree the challenges of Connecticut Democrats. The federation and the party both pride themselves as able to accommodate disparate views and needs.

“The Democratic Party and organized labor are not monoliths. They are big tents,” said Rep. Sean Scanlon, D-Guilford. “That is our greatest strength, but it’s also something that causes issues.”

Had the trades left, it would have reinforced the AFL-CIO’s reliance on AFSCME, the AFT and other public sector unions for political influence at the state Capitol.

Some in the trades — hobbled by relatively high unemployment, a consequence of anemic economic growth and the inability of the state to finance overdue infrastructure improvements — saw themselves as unsupported by the AFL-CIO.

The trades and the construction industry, which work in tandem lobbying for infrastructure appropriations, spent about $1.5 million trying to win support for Gov. Ned Lamont in 2019, when he proposed tolls as a revenue source for highway and transit projects.

“We did not get any support from the AFL-CIO until the last minute,” said Nate Brown, vice president of the Building Trades Council and government relations director for Operating Engineers Local 478. “That was a slap in the face to all of us.”

The AFL-CIO’s focus that year was a successful campaign for passage of one law raising the minimum wage in increments from $10.10 to $15 and another creating a paid family and medical leave program.

“They kept saying, ‘Your infrastructure stuff will be next, will be next.’ We were left in the dust,” Brown said.

Wednesday’s vote came during the monthly meeting of the executive council of the Connecticut Building Trades at the Laborers’ union hall, before a news conference with Lamont, U.S. Sens. Richard Blumenthal and Chris Murphy and others celebrating the Senate passage of a bipartisan infrastructure spending bill.

At the news conference outside the hall, there was no mention of the internal drama that had preceded it inside.

Brothers spoke warmly of the Biden administration’s support for infrastructure spending. In an interview, Brothers said the trades concluded they were better off staying in the labor federation and that their concerns had been heard.

“The consensus was we were so successful in the last legislative session with all the things we had done, and the AFL-CIO was a part of that. So, we’re going to stay the course and continue to do what we do,” Brothers said.

The bills passed this year require favorable wage rates for certain construction projects, including renewable energy, and shored up the unemployment system, which is of special interest to trades whose members periodically go without work. The trades also fought for the highway use tax on heavy trucks, a source of $90 million in revenue for infrastructure.

Connecticut is one of the most heavily unionized states in America, primarily due the high rate of unionization in the public sector — 62%. Overall, only 17.1% of the combined public-and-private workforce are union members in the state, compared to 10.8% across the U.S.

The president of the Connecticut AFL-CIO is Sal Luciano, a retired state social worker, and his likely successor in October is Ed Hawthorne, a lawyer with the state Department of Labor. In interviews, both men acknowledged the tensions with the trades and public-sector unions, not only in Connecticut.

“It’s not new,” Luciano said, pointing to construction trades splitting from the AFL-CIO in New York. “In Connecticut, we’ve been able to find a way to make it work.”

He said he understood the anger in the trades, whose leaders saw their members commuting to jobs in Massachusetts and Rhode Island.

“When the economy is not doing well, their workers are not working,” Luciano said. “The trade guys are fighters. The heads of the trade unions are really good fighters, and it hurts when they have to see their members unemployed or see their members go out of state.”

Hawthorne said the trades’ vote was encouraging, helping the federation to stay focused on a broad agenda.

“That’s what the AFL-CIO is all about — working people working together, whether they are in the public sector or private,” Hawthorne said. “We preach solidarity, and we know that we are stronger today.”