A barber’s deal in Hartford: Get a COVID shot, and the haircut is free 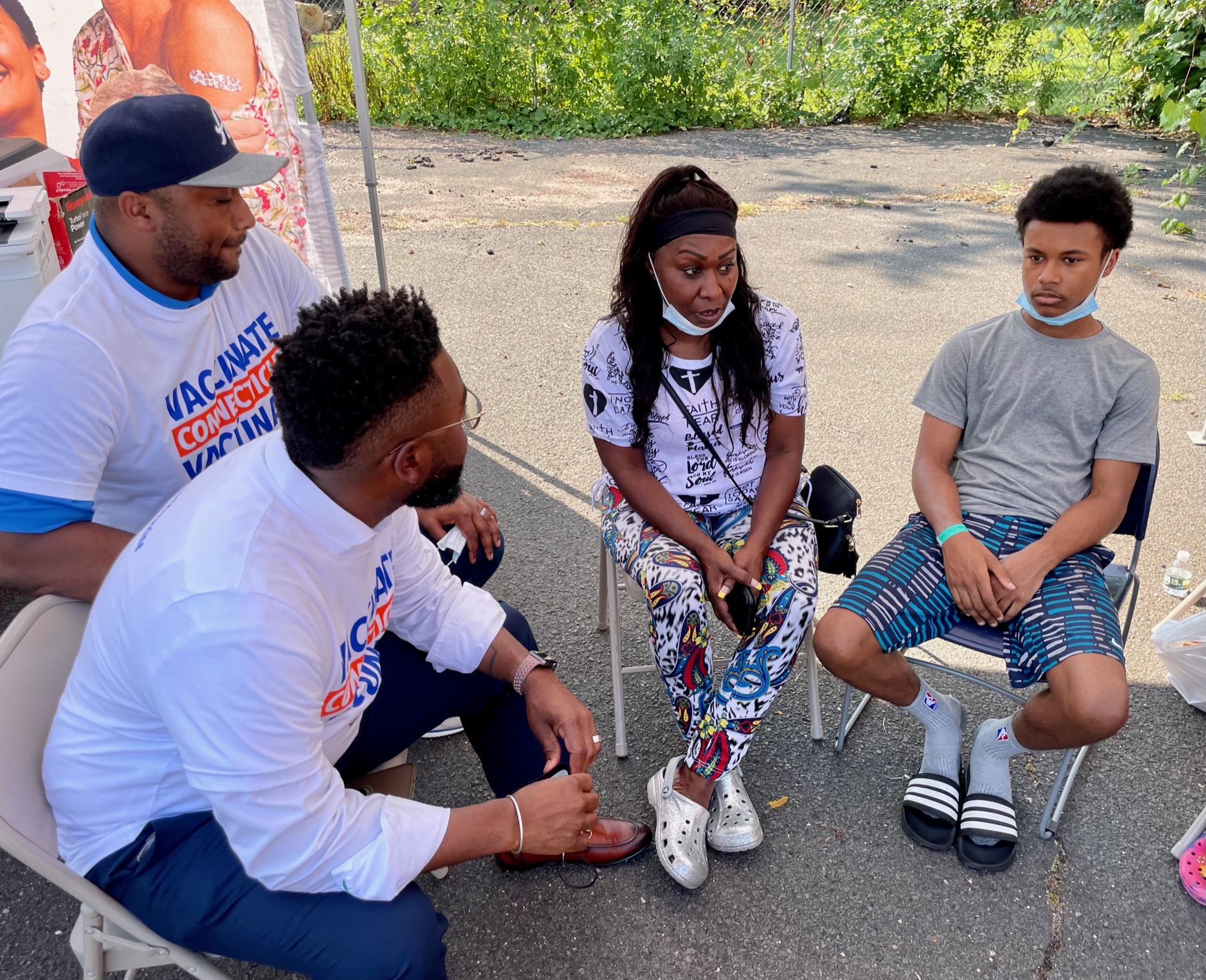 HARTFORD — Lauri Malawitz, a North End preacher who believes in the power of prayer and vaccinations, was taking her 14-year-old grandson, Zakariah, for a haircut Wednesday when she saw a woman in medical scrubs outside the barber shop.

Malawitz, who is fully vaccinated, asked if they were offering COVID-19 vaccinations.

“She said, ‘Yeah, and a free haircut,’” Malawitz said. Laughing, her rapid-fire reply was, “That’s right up my alley, Jesus-thank-you-Lord!”

And so Zakariah got both.

Griffin Health set up a clinic under two canopies in an empty lot on Barbour Street between a storefront church, The Citadel of Love, and a neighborhood source of wisdom and grooming since 1964, the Norris Barber Shop.

Paul Mounds, the chief of staff to Gov. Ned Lamont, used to get his hair cut in the shop. Mounds and his boss stopped by Wednesday to promote an ongoing vaccination effort now being waged at the retail level. 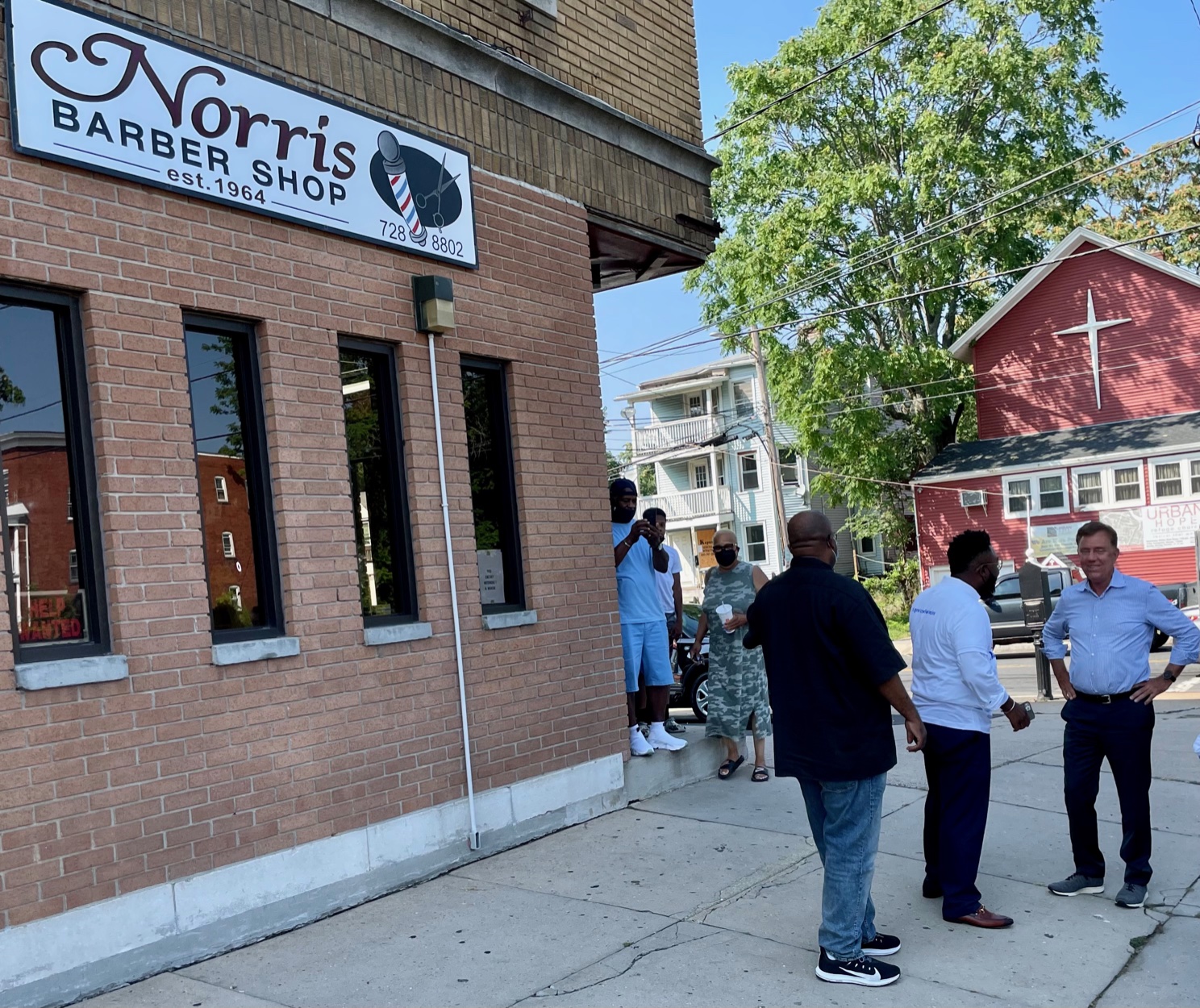 Connecticut’s vaccine rollout is among the most successful in the United States: More than 65% of its residents are fully vaccinated against COVID, but the rate is less than 50% in a dozen communities.

They are a mix of cities like Bridgeport, Hartford, New Britain and Waterbury and small towns like Griswold, Killingly, Plainfield, Putnam, Sterling and Thompson.

After Mounds did a barber shop tour in Windham, where the rate is 49%, state Rep. Brandon McGee, D-Hartford, urged him to come to the shop at Barbour and Westland.

“One of the things that we found to be true is a lot of the connections to our community start at barber shops, our bodegas, our churches, etc. So recognizing the importance of our barber shops is extremely important,” McGee said.

The clinic was open from noon to 6 p.m. Aside from the free haircuts, there were Jamaican beef patties and ice pops. Amanda Stewart stopped with her 2-year-old son for an ice pop. She stayed for a vaccination.

“You are safe. That means he’s safe,” Lamont told Stewart, who sat on a folding chair. The governor leaned over and said, “You’re the best. We really appreciate it.”

That was the same message Joan Wilson, an outreach worker, used on Stewart. She told her it was the best way to decrease the odds of bringing the virus home to her child.

“I just came down here to get my kid a popsicle, and I ran into Joan, and she gave me some good advice,” Stewart said. “It made me think, ‘better safe than sorry.’”

But the pop-up clinics are boutiques, not big-box retailers. Only 16 people had been inoculated by 3:53 p.m., when the governor and the TV crews had left. They would be stay for another two hours.

Mounds said the outreach would continue.