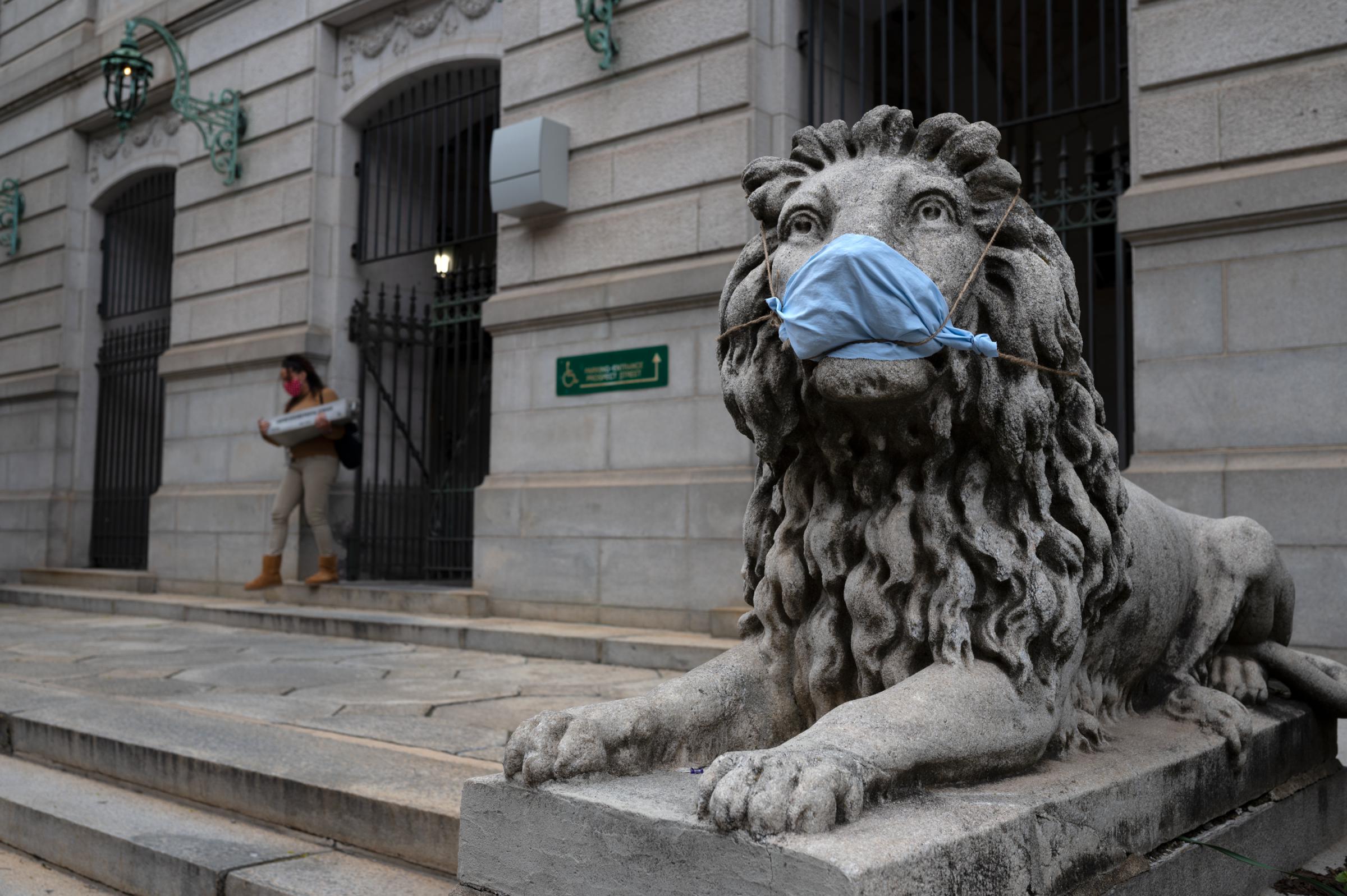 A statue by Hartford’s city hall dons a mask, part of a 2020 initiative by the city’s public works department to raise awareness of the state’s mandate to wear masks in public spaces.

Aimee Krauss, the director of the West Hartford-Bloomfield Health District, is responsible for two towns with some of the highest vaccination rates in the state. But when cases started climbing in July and August, both towns decided to implement mask mandates.

“Both West Hartford and Bloomfield do have a good vaccination rate. We are pushing to make it a better rate,” Krauss said. Nevertheless, masking is “the best mitigation measure we have regarding this virus.”

The Centers for Disease Control and Prevention updated guidance regarding indoor masking on July 28, recommending that vaccinated individuals wear masks in specific settings. Currently, all counties in Connecticut meet the CDC’s transmission criteria for indoor masking.

Earlier this month, Gov. Ned Lamont decided not to enact a statewide mask mandate. Instead, he allowed each of Connecticut’s 169 towns and cities to enact their own mask mandates, citing differential vaccination coverage across the state as a key reason why more localized rules were necessary.

But a CT Mirror analysis of the most recent state data from last week showed that higher vaccination rates do not necessarily correspond with lower rates of new cases on the town level, suggesting that the two are somewhat independent. The weak correlation raises the question of how strongly vaccination rates should be factored into decisions regarding other disease mitigation strategies like masking.

The governor’s policy has also received some pushback from local leaders who argue that the approach is less effective and confusing, but it’s one that Connecticut is committed to for the time being.

“The governor’s current approach, from a policy perspective, is what we’re trying to stick with for now, given that we have seen a flattening of the key metrics,” said Josh Geballe, the state’s chief operating officer.

Twenty-five towns have imposed some form of mask mandate so far, according to The Hartford Courant.

The Connecticut Department of Public Health did not respond to written questions.

Vaccination rates are “a reasonable starting point” in thinking through that decision, said Saad Omer, epidemiologist at the Yale School of Public Health. “But at a mayor level, I would be looking at your case trajectory.”

Two things can be true at once: COVID vaccines are effective at reducing the risk of symptomatic disease, severe illness and death, even against the highly contagious delta variant that is currently dominant in the United States; and a high town-wide vaccination rate is no guarantee of low case rates.

Connecticut updated its tracking of vaccine breakthrough cases in August and is now matching positive cases with immunization records. Since the state has been more active about tracking breakthrough cases, the numbers have jumped in recent weeks, but the risk of contracting COVID after full vaccination is five times lower than before vaccination. The CDC recommends that vaccinated individuals get tested if they are symptomatic or have been exposed to the virus.

But municipalities that have relatively high vaccination rates may still see high case rates. Hypothesizing as to why is complex. To start with, “We have substantial fractions of the population that are not even eligible for vaccine,” said Ted Cohen, an epidemiologist at the Yale School of Public Health. And as detailed census tract level data show, “even in communities with relatively high vaccination rates, we still have substantial pockets of unvaccinated individuals.”

“We’re not close to whatever would be considered a theoretical sort of herd immunity threshold,” he said.

Second, vaccines reduce the relative risk of infection from a baseline — a vaccine’s efficacy rate represents the extent to which that baseline level of risk is reduced. When a community experiences an outbreak, the baseline level of risk increases for everyone, irrespective of their vaccination status, though the extent to which risk increases is dependent on vaccination and an individual’s underlying health conditions.

And third, people change their behavior in response to perceived risk, Omer said. As case rates increase, more individuals may seek out vaccinations, changing the relationship between the variables. Connecticut has reported increases in vaccination rates as the delta variant has taken hold, as has the rest of the United States.

All of which is to say that “a crude analysis” on the town level comparing vaccination rates and case rates can’t be extrapolated to question the value of vaccination as a whole, he said.

Though vaccination rates and case rates on the town level might be weakly related, the governor’s decision to cede control to local leaders about how and when to impose mandates may actually improve the likelihood that people will mask up, Omer said.

“If you are sort of running in first gear all the time, people don’t comply with it,” Omer said. “So some agility actually helps you have good net compliance if you ease up on things … when it is slightly, somewhat safer to do so.”

On the other hand, the efficacy of masking as a public health strategy is compromised when enacted in a piecemeal fashion, especially in a state as small as Connecticut, said Matthew Hart, West Hartford’s town manager.

“Under the governor’s leadership, we’re much better off than other states,” Hart said. “But we were somewhat surprised that the governor was leaving this decision to the individual towns because the virus, as we know, doesn’t respect municipal boundaries.”

West Hartford approached the Capital Region Council of Governments in an effort to impose a mask mandate regionally, Hart said.

West Hartford adopted a “phased approach” to its mask mandate, first starting with a request to local businesses that they put one in place with the understanding that the town might impose a mandate if cases continued to rise. When West Hartford asked businesses to voluntarily impose mask mandates, some argued that the town had abdicated its responsibility to enforce a mandate, Hart said.

In Orange, on the other hand, health director Amir Mohammed has not recommended that the town enact a mask mandate.

The majority of local businesses in Orange have already put policies in place on masking, looking at practices in schools and the fact that Orange requires those in town buildings to mask up, he said.

Connecticut generally has a high level of mask usage compared to other states, and Mohammed argues that a mandate would do little to shift the numbers at this point.

“What would make a difference is to convince or educate our folks who have remained unvaccinated,” he said. “We have to look at what has really been the critical element of protecting ourselves.”

In Orange, contact tracing has shown that the majority of those getting infected have been unvaccinated, Mohammed said. Increasingly, people from the same household are all falling sick together, a trend that Mohammed attributes to the delta variant’s contagiousness.

“Masking is kind of a secondary priority for me,” he said.

“It’s sort of a reasonable theoretical assumption” that unvaccinated individuals would benefit from high overall vaccination rates in their town,  but “it’s not enough to keep them protected,” Cohen said.

“Mask wearing is an activity that prevents not only infection of the person wearing a mask but transmission to others,” Cohen said. “We need multiple layers of protection at this point against the sort of strains with the properties that delta has.”