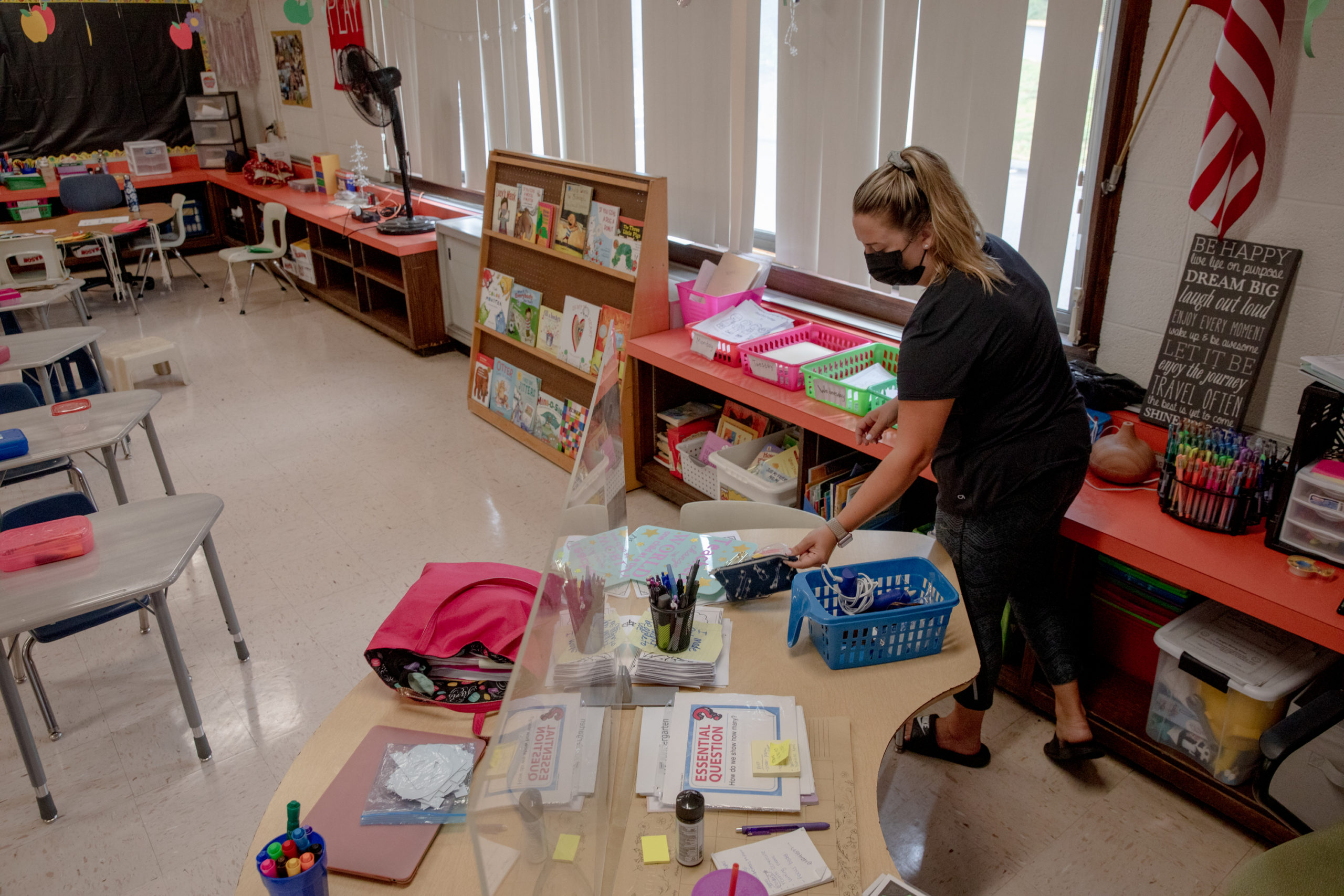 Teacher Courtney Haskell prepares for the upcoming school year. Different from last year, students in her class will be allowed to share books in the bookshelf in the classroom.

A year ago, like many districts throughout the state, the Meriden public school system was ready to re-open its doors, weary of a pandemic that had forced its community to go remote for half the previous year.

But it wasn’t so easy. Schools throughout the state went back and forth between closing and reopening after students and staff tested positive for COVID and some families decided to keep their kids home as a precaution.

This year is more promising for fully in-person learning, though. Vaccines are available to teachers and students over the age of 12, there are few remote learning options and the Centers for Disease Control and Prevention scaled back on some guidelines — including reducing social distancing from 6 to 3 feet in school buildings.

“We obviously have 3 feet apart, we’re going to have carpets, but they’re only going to be allowed to sit on the carpet if they’re 3 feet apart,” Crispino said. “We ordered a whole bunch of more desks to make sure that they’re separating kids.” 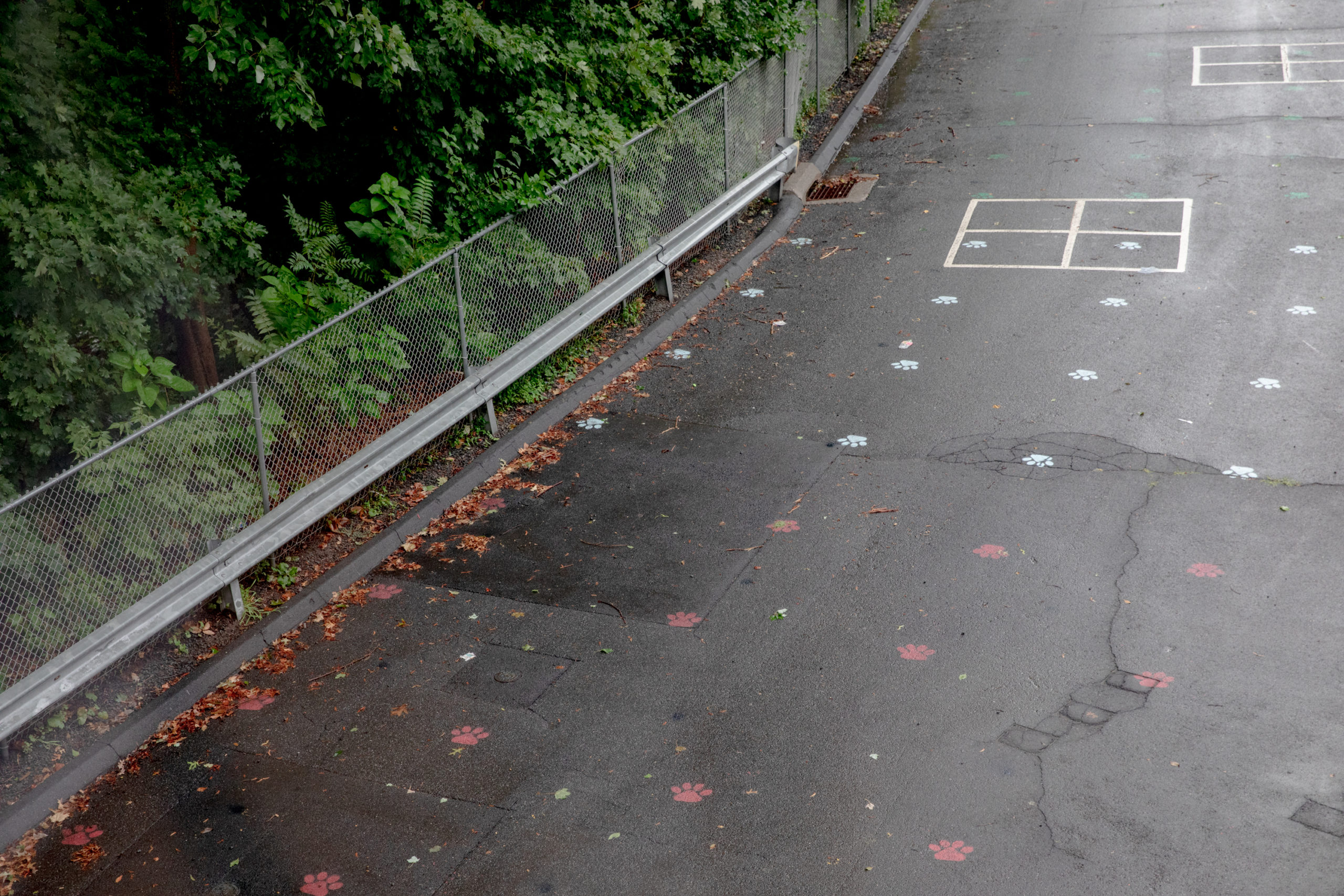 Stickers are attached on the ground to indicate where students can stand for a mask break in the back of the Casimir Pulaski Elementary.

He added that once families hear all the different mitigation efforts the district is putting in place that are similar to last year’s, they feel more comfortable with their child’s return to school.

Crispino has been leading the district’s efforts with re-engaging students and is often the point person helping parents in Meriden transition their children back to school.

On a recent morning, shortly before the school year started, Crispino fielded calls from families who had concerns ranging from after-school needs to finding school supplies for families who were drastically impacted financially during the pandemic.

Behind his mahogany desk tucked into the corner of his office at the district’s central office, Crispino picks up his phone to call a parent he connected with once in the spring to help her figure out childcare for her son before and after school. During the call, the mom he’s speaking with shares that she’s getting ready to head back into the office after being able to work from home this last year and immediately needs to figure out what she can do for her child before the school year begins.

“You don’t need to worry about anyone else that you’ve had to speak to,” he tells her. “You’re going to work with me.” 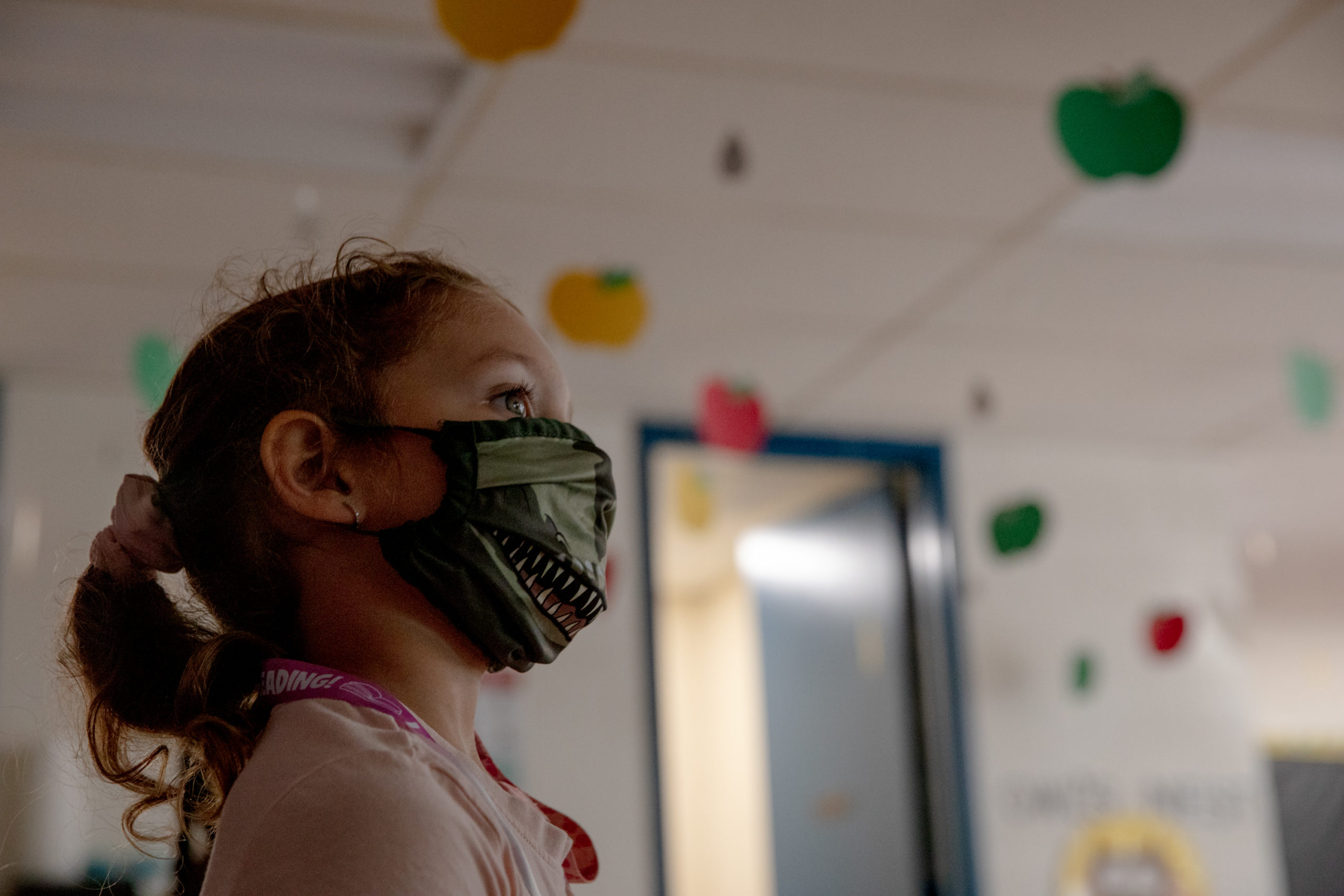 Nova Salch, who is entering kindergarten this year, watches an educational video at Casimir Pulaski Elementary in Meriden. All students attend the school in person this academic year.

What followed their conversation was Crispino calling up the child’s elementary school to see what options they have, then he connected with the local YMCA so that they can not only set up before and after school care but also transportation to and from home for the child of the mother he spoke with nearly an hour prior.

“I’m not waiting for calls back,” Crispino said, adding that he could easily forward concerns and inquiries that come his way from parents and families to someone else, but that’s not “his style.”

For the first time heading into this school year, Crispino put together an entering kindergarten summer program for families who have children new to school altogether and may have been nervous or had questions for teachers and school officials as they head into the fall.

Last year, Meriden offered in-school or remote learning. This year, they are expecting all students to learn in the classroom, which has required them to implement additional safety precautions to ensure the safety of students and staff. 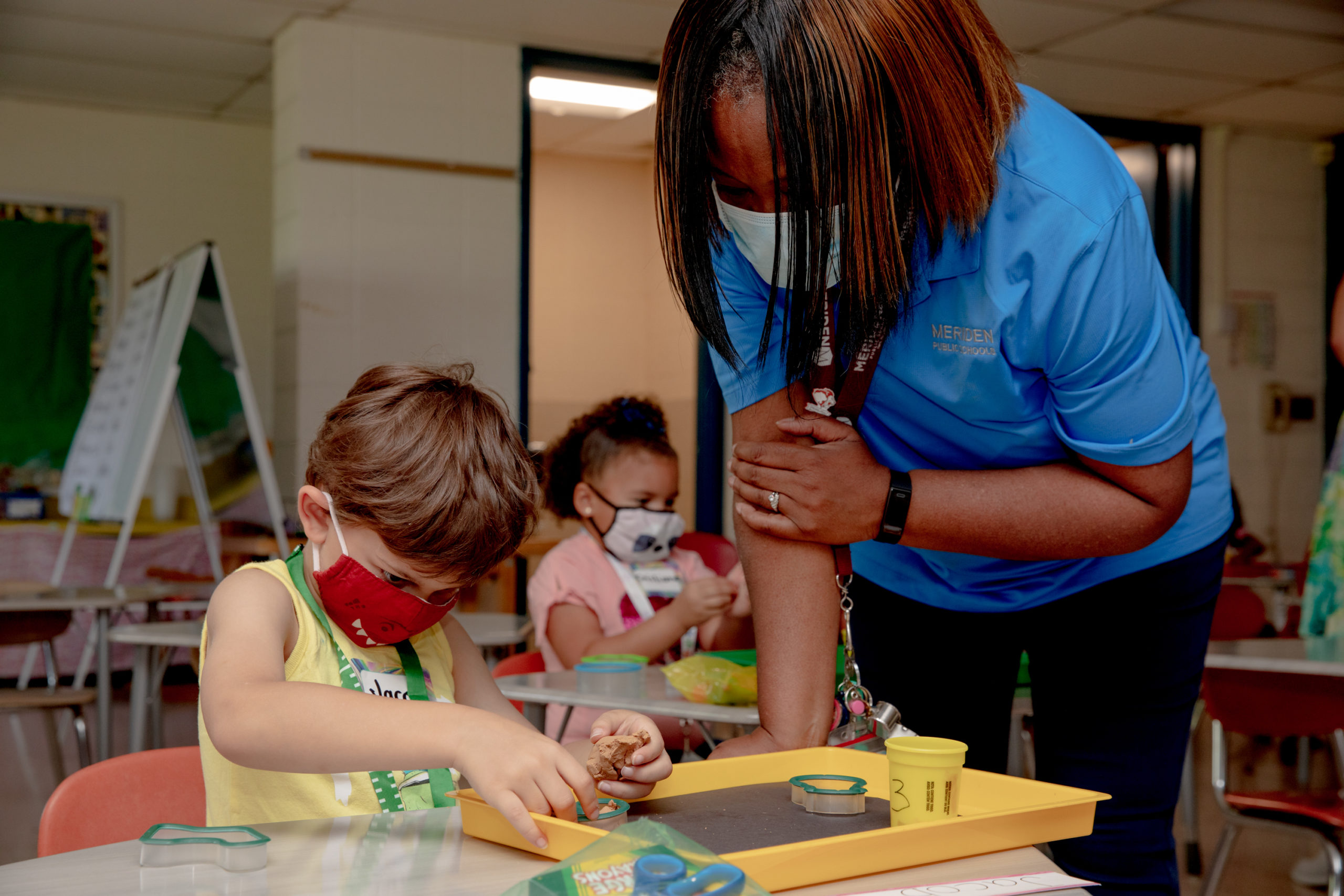 Jacob Beltran, left, 5, molds the clay into a shape while Anita Hunter, a paraprofessional, gives compliments. Jacob’s mother, Tanya Beltran, said she is happy that both of her sons will attend Casimir Pulaski Elementary in person. “They need to be back. There is nothing like learning in person,” Tanya said.

One of those precautions is for everyone to comply with the governor’s order to wear masks. Gov. Ned Lamont extended last year’s order mandating the wearing of masks in K-12 schools as a precaution against COVID-19, as well as a new requirement that teachers and staff be vaccinated or tested weekly.

At Casimir Pulaski Elementary School, the largest elementary school in Meriden, some of those mitigation strategies to prevent the spread of COVID-19 include utilizing spaces in the building in preparation for double the number of students coming into the building now that remote learning is no longer an option.

In the school’s cafeteria, for example, students will still be keeping their distance while eating together. Lauren Bernacchia, Casimir Pulaski assistant principal, said there will be stickers on the seats so students know where they can sit.

School officials had to add dining tables to the gym in the space right next to the cafeteria to accommodate more students and space between them.

They also plan to use the gym and cafeteria for indoor mask breaks for when it’s cold or raining. Students will have assigned seats during these breaks — “That way everything’s traceable and consistent,” Bernacchia said.

“We are beyond positive and following what’s expected, and making it work,” she added. “And it does work. Getting creative is helpful.” 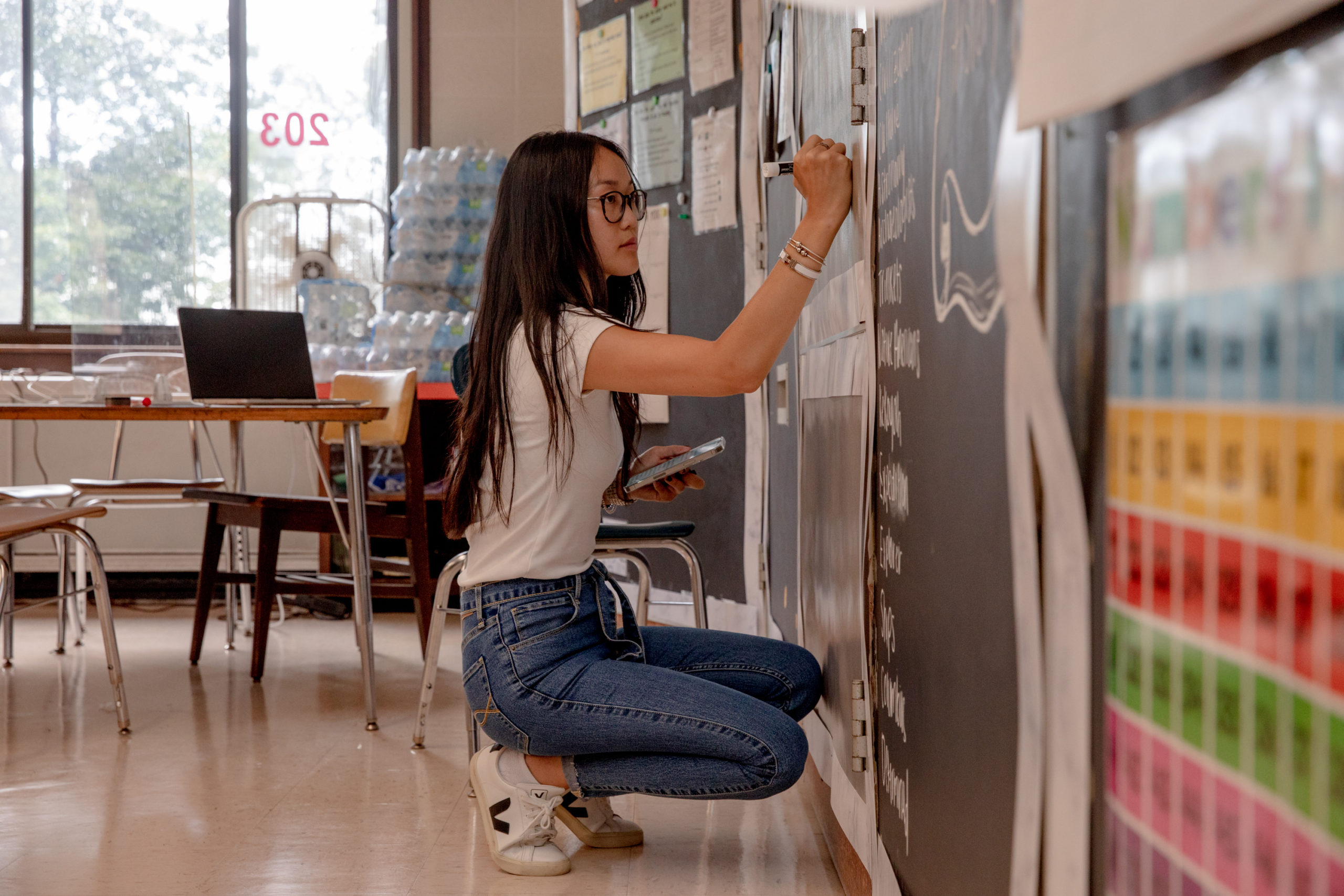 Teacher Olivia Marrone writes down lesson plans at the Casimir Pulaski Elementary in Meriden. Marrone taught only online classes last year, but will teach the fifth-grade students in person.