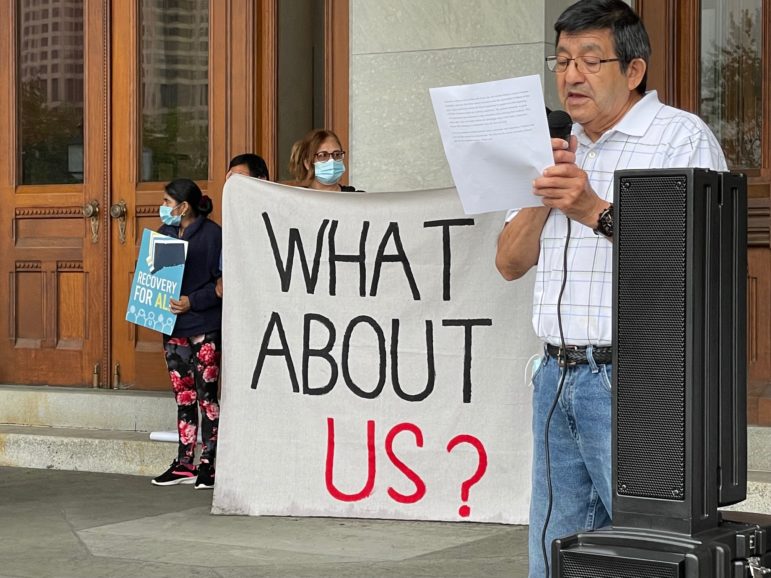 Ciro Gutiérrez, a janitor at the University of Connecticut Health Center, speaks at Thursday’s rally of the Recovery For All Coalition outside of the Capitol.

The problem with that, though, is that most pandemic aid has been assigned for other purposes.

The Recovery For All Coalition, a progressive group of 48 labor, community and faith-based organizations, rallied outside the Capitol for $500 million to be dedicated to public- and private-sector employees who risked their lives maintaining key services during the pandemic.

That’s well beyond the $20 million Lamont and legislators have dedicated for what many are calling “hero pay.” And this plan calls for pay to be directed only to National Guard members and state employees who were at significant risk during the pandemic.

Also Thursday, minority House Republicans urged officials to expand the $155 million deposit already approved for the state’s unemployment trust. All of this aid effectively would be tax relief for struggling businesses.

“If we’re serious about equity in Connecticut, then it’s time to pay our heroes,” Puya Gerami, director of the Recovery For All Coalition, said during the rally.

And while the organization has tremendous respect for front-line state workers and National Guard members, he added, many private-sector workers in health care, social services, supermarkets and other professions risked their lives and kept vital services afloat by going into work over the past year and a half.

Sherri Dayton, an emergency department nurse at Backus Hospital in Norwich, said she and many of her colleagues spent months isolating themselves from family and friends to avoid potentially exposing them to the virus.

“Some say the worst is behind us and that we should move on; we say that the sacrifices of essential workers should never be forgotten,” she said. “It’s really quite insulting and disheartening that we have to be here today.”

If $500 million for “hero pay” seems large relative to $20 million allocated for that purpose by Lamont and lawmakers, Puya said, it is a relatively modest share of the American Rescue Plan Act funds Congress has sent to Connecticut.

More than $3 billion went directly to state government while another $1.6 billion went to cities and towns and $1 billion more to local school districts.

But Sen. Cathy Osten, D-Sprague, said it’s not that simple.

More than $1.7 billion of the funds sent to state government are being used to balance the biennial budget that began on July 1.

About $250 million of the state’s funding has yet to be allocated, but Osten said many of these programs will be revisited this fall, and additional needs are anticipated.

“I’m not opposed to having a conversation with anybody, but there really is nowhere near that [$500 million] amount available,” she said.

“We’ve had a significant commitment toward hazard pay and numerous other necessary programs,” added Max Reiss, Lamont’s communications director, who added that the coalition’s $500 million request “is simply not realistic.”

It’s also not the only request on the table.

The $155 million in federal funds that state officials dedicated for the unemployment trust is just one step toward resolving a major financial burden hanging over the heads of Connecticut businesses.

Connecticut, like nearly all other states, exhausted its trust paying unemployment benefits in the first few months of the pandemic.

According to the Department of Labor, more than 290,000 filers received weekly benefits during the worst of the pandemic in late spring and early summer of 2020. And as of Thursday, about 120,000 filers still receive benefits each week.

When trusts are exhausted, states can borrow funds from the federal government. Connecticut has accumulated more than $700 million in debt, and that burden is expected to approach or exceed $1 billion by year’s end, state labor officials say.

The state normally levies a special assessment on businesses to replenish the trust. Even given the $155 million in federal relief funds Connecticut deposited into the trust, businesses are on the hook for more than $800 million.

“Employers are facing a perfect storm we fear could devastate the many main-street businesses left hanging by a thread after enduring the first wave of the pandemic and the associated government shutdown,” House Republican Leader Vincent Candelora said. “We’re already seeing that their recovery will be even more difficult than anticipated due to the combined impact of inflation, staffing issues, supply chain problems, and a series of anti-business policy decisions from the legislature. With that reality in mind, it’s imperative that everyone serving in Hartford move economic issues to the top of their agenda.”

Candelora added that it’s uncertain whether this will be addressed in a special session this fall, but Democratic legislative leaders have said they remain open to expanding relief for the unemployment trust.