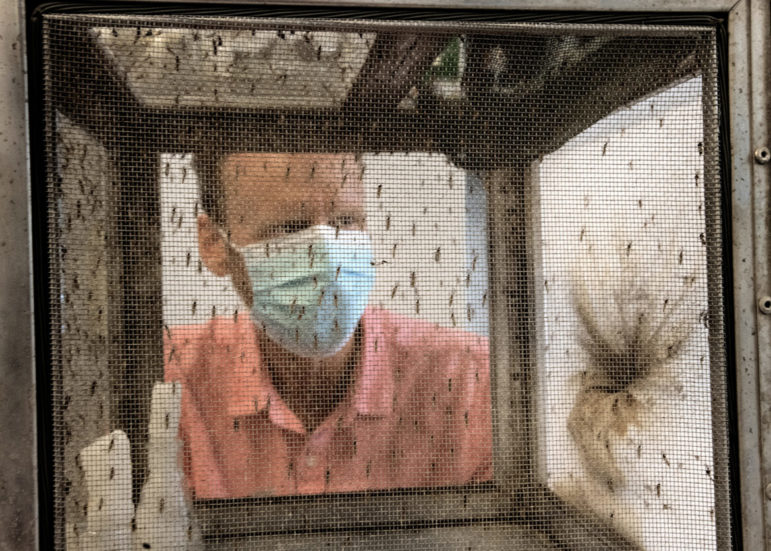 With mosquito levels at the highest in 20 years, three mosquito-borne illnesses are most dangerous to humans in October after being passed from birds to mosquitoes over the summer months.

This year, the first report of Eastern equine encephalitis (EEE) occurred Sept. 23 in mosquitoes trapped in Voluntown, in southeastern Connecticut, as part of the state’s surveillance program. EEE is rare but kills one-third of those who catch it, according to the state Department of Public Health.

Two years ago, three out of four people who caught EEE in Stonington died. A mostly bird-biting mosquito, Culiseta melanura, which favors freshwater swamps, feeds on infected birds, which then pass EEE on to mosquitoes that bite birds and people.

Mosquitoes also spread two other serious diseases—West Nile virus and Jamestown Canyon virus—that cause neurological and flu-like symptoms. There are no vaccines, no surefire cures, and proper diagnoses are difficult.

Scientists at the Connecticut Agricultural Experiment Station (CAES) trap mosquitoes weekly during the warm season. The traps capture a small percentage of all mosquitoes but give scientists an accurate picture of the highest levels of these illnesses.

“These are very serious illnesses,” said Philip Armstrong, a research scientist at the Connecticut Agricultural Experiment Station and the head of the state’s mosquito testing program. “Those that survive infections suffer from lifelong disabilities, or they have really long-term residual effects.”

Armstrong said that by the time a human gets sick and is diagnosed through blood tests with one of these illnesses, the risks are even higher. “The human cases are a lagging indicator of risk. By the time we learn about it, it’s usually weeks after.”

Armstrong said the trapping and testing they do is the only way to “know what we’re dealing with” each year in the mosquito population and protect people from these illnesses. “The risk of these viruses changes each year with variable weather conditions and other factors that we don’t fully understand,” he said, “so the only way to know what the risk is, is to go out and do the hard work which is trapping.” 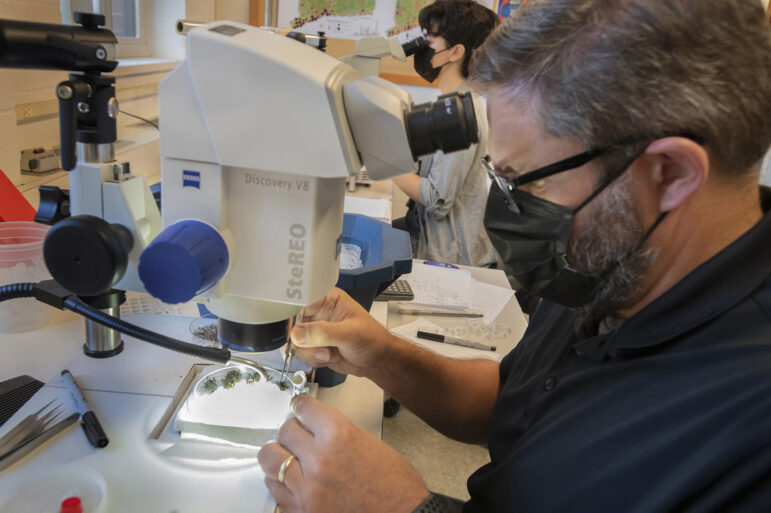 John Shepard (front), assistant scientist, and Catherine Goncalves, laboratory research assistant, sort the various types of mosquitoes collected from traps in the New Haven area. The mosquitoes will then be sent for testing.

The numbers. What the traps are showing

As of Oct. 4, the West Nile virus had been found in trapped mosquitoes in 45 towns, including Greenwich, Hartford, New Haven, Norwalk, Waterford, Wethersfield, and Stamford. The virus tends to accumulate in mosquitoes that breed in puddles and storm drains in urban areas.

Jamestown Canyon virus has been found in mosquitoes trapped in 16 towns.

Year to year, the trap data shows fluctuations in disease-carrying mosquitoes, depending on how much it has rained. In 2020, the West Nile virus was detected in mosquitoes in 29 trap locations in 21 towns. Jamestown Canyon virus showed up 13 times in seven towns. The rare Eastern equine encephalitis was found twice that year: in Stonington and Hampton.

In 2019, 122 instances of EEE were found in mosquitoes trapped in 20 towns, a substantial number for EEE, scientists said. West Nile virus was detected 82 times in 24 towns. Jamestown Canyon virus was found 20 times in 11 towns.

It may be difficult to translate virus presence in the traps to percentages of disease carriers in the general public. But a different kind of test published in 2001 offered a clue. A team from CAES looked for antibodies to the Jamestown Canyon virus in samples from blood donors. It concluded the virus was present in about 4% of the general population. Most people who get exposed, therefore, don’t get sick. But it can be fatal: the public health department reported in August 2021 that a patient in Dublin, New Hampshire, died of Jamestown Canyon. There is no commercial blood test for the Jamestown Canyon virus. The only way to test people is by sending samples to the Centers for Disease Control and Prevention.

“Human cases are very rare and sporadic,” Armstrong said, “but it’s also likely, because there is no testing on a regular basis, that some of these infections are not diagnosed.” 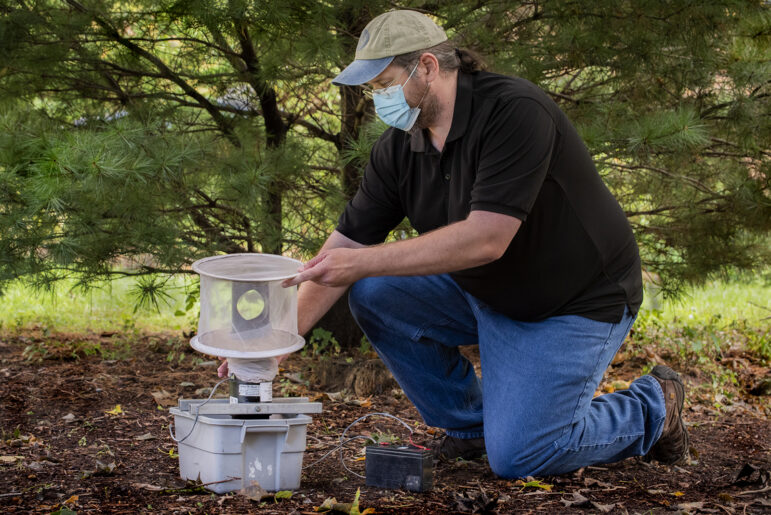 CAES research assistant Michael Olson, demonstrates setting a mosquito trap in the kind of shady area that mosquitoes like.

Climate change could be making it worse.

Climate change could be creating conditions that make the situation worse. Connecticut is getting wetter and warmer, and mosquitoes breed in temporary pools of water until the first frost.

Mosquito populations have been exploding in recent years. A team of five scientists from CAES found in a 2020 study that mosquitoes—unlike many other insects—have increased dramatically since 2001. The study found the number of mosquitoes trapped has risen by about 60% since 2001, and “species richness” has increased by 10%.

Armstrong is a coauthor of the study, along with the former mosquito program head, Theodore Andreadis. “There are a lot of papers that have come out recently on what they call insect Armageddon—all these beneficial insects that are declining in abundance and diversity,” Armstrong said. “But one exception is tee mosquito. At least here in Connecticut, mosquitoes are getting more abundant. They’re getting more diverse. With the heavy rain and the wetter summers and warmer winters, I think it’s all creating nice conditions for them,” Armstrong said.

The trend continued this year. The numbers of mosquitoes have been the highest in 20 years, based on what scientists are finding in the traps.

The CAES collects mosquitoes from spring through fall at 108 locations in 88 cities and towns. It increased the trap number by 16 after an outbreak of EEE in 2019, Armstrong said. CAES staff identify every individual mosquito, divide them into groups by species, and test them all for the three viruses. The public can view the reports here.

State health officials advise residents across the state to wear long sleeves and long pants and apply insect repellent when they go outside, especially at dawn and dusk when many mosquitoes bite.

This story was originally published Oct. 12, 2021, by the Connecticut Health Investigative Team.