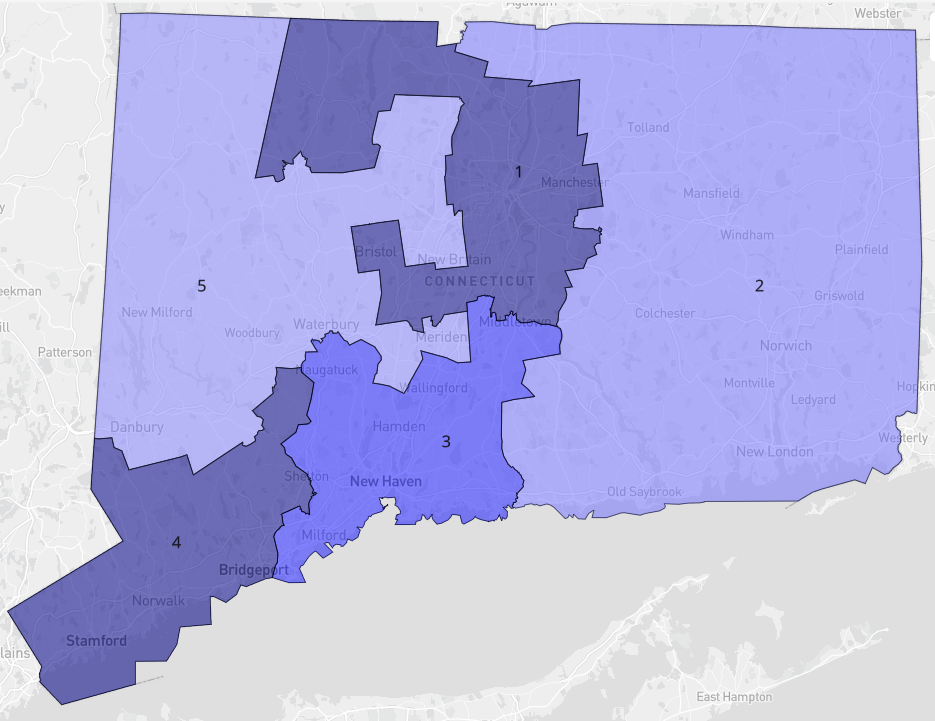 This map shows the current partisan tilt. The darkest, the 1st and 4th, and the slightly lighter 3rd, are solidly Democratic. The 5th and 2nd, on the west and east, lean Democratic.

Nathaniel Persily, the political scientist and law professor who revised Connecticut’s congressional map 10 years ago, was hired Thursday by the state Supreme Court to do the job again.

With an impasse declared only two days ago by the Reapportionment Commission, the court moved quickly to hire Persily, outline parameters for a new map and set a deadline of Jan. 18.

The court ordered him to both respect the existing districts yet ignore the political considerations that led to the impasse by the legislature’s bipartisan Reapportionment Commission.

“In drafting his plan, Special Master Persily shall not consider either residency of incumbents or potential candidates or other political data, such as party registration statistics or election returns,” the court said.

The all-Democratic congressional delegation refused to informally endorse districts proposed by Democrats on the commission, gambling that the court’s plan would better preserve the status quo.

The commission did not need their consent as a matter of law or constitution, but the absence of an endorsement prompted the commissioners to yield to the court.

The court states it will do what the commission refused: Once a plan is drafted and made public no later than Jan. 18, interested parties may suggest changes until Jan. 24.

On Jan. 27, the justices will hold a public hearing. Their deadline for adoption is Feb. 15.

The process poses a potential challenge to the congressional Democrats: If they wish to be heard, it must be in a public communication to the court, not confidential conversations with the commission.

That means the members of Congress either must agree behind the scenes on a unified recommendation to the court or be willing to fight openly for an advantage in the new district lines.

By most assessments, all five districts currently favor Democrats, though the 2nd and the 5th are competitive, if leaning Democratic.

Elements of the 2nd, which covers rural and suburban eastern Connecticut, have been trending Republican over the past decade. The 5th of western Connecticut has been relatively stable.

Persily is widely regarded as an expert in redistricting, having worked as a court-appointed special master in Connecticut, Georgia, Maryland, New York, North Carolina and Pennsylvania. He is a professor of political science and law at Stanford after previously teaching at Columbia and the University of Pennsylvania.

He also served as the senior research director for the Presidential Commission on Election Administration.

Only six of the seven justices on Connecticut’s high court will participate. Justice Christine E. Keller, the mother of a commission member, House Speaker Matt Ritter, D-Hartford, has recused herself.

The court has had oversight over the congressional map since the commission missed a constitutional deadline of Nov. 30, but it essentially had agreed to defer to the commission until Dec. 21.

The awkward shape of the current map was set 20 years ago when Connecticut lost one of its six seats, and two incumbents, a Democrat from Danbury and a Republican from New Britain, had to face off in the redrawn 5th District.

Republicans won three of the five seats in 2002 and 2004 but none since 2008. Ten years ago, reasoning that the map essentially was fair, the court directed Persily to take a light hand in his revisions.

This year, the court is both directing him to ignore politics yet make only the changes necessary to produce a constitutionally acceptable plan.

“In developing a plan,” the court said, “Special Master Persily shall modify the existing congressional districts only to the extent reasonably required to comply with the following applicable legal requirements:

The court also directed Persily to draw compact districts — or at least not ones with greater sprawl than today.

Connecticut grew by not quite 32,000 people in the past decade, mostly in Fairfield County. Hartford, as well as rural communities in eastern Connecticut, lost population.

The 2nd District needs to pick up another 21,288 residents, while the 4th District of lower Fairfield County needs to get more geographically compact and shed 25,627 people.

Since the overpopulated 4th and underpopulated 2nd share no border, changes will have to ripple across the map.