Judge Thomas Moukawsher says the state’s school funding mechanism is irrational and the that state thereby failed to fulfill its mandate to thousands of schoolchildren across the state, and that the state spends this money “whimsically.”

The funding formula is perhaps irrational and needs to be revised, but  this judge’s decision can be described by those same two adjectives, and reflects a very basic failure to understand the problem — and not just this problem but the very fundamentals of any decision-making process. It seems that the decision was arrived at by looking at test scores and making the assumption that the only variable that affects these scores is financial, while neglecting the fact that there are many other variables which contribute to the quality of the outcomes.

Numerous variables affect testing outcomes and the quality of the education that they measure. The sensitivity and responsiveness of the receptors (in this case, the students, the quality of support network outside of the school and the environment in which the receptors exist, just to name a few, should not be ignored. To do so indicates a thoughtless dereliction of judicial responsibility and a disservice to the children — exactly the accusations Moukawsher lodges against the state.

The poorest school districts are already funded by the state far in excess of the more affluent districts, and in terms of absolute fiscal expenditures more is spent on these poorly performing schools/students than some of the highest performing schools/students. And note that Connecticut’s schools are consistently ranking in the top five state school districts in the country.

In school districts in which there is high unemployment, frequent shootings, ubiquitous drug presence, and in which nearly 70 percent of the children are living in single-family homes, the students perform poorly. Correlations do exist, but not between performance and the amount of financing.

I believe that the judge and our legislature are failing to understand that this is not a financial problem, or at least a financial problem that will be solved by hiring more teachers and adding more facilities. The school budget is not the issue. This is another example of shortsightedness resulting in the misapplication of limited resources that is so characteristic of our state and federal government. 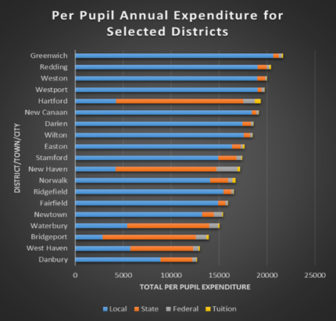 The entire argument that has been misrepresented by the judge and by most news outlets has been that wealthier school districts are being subsidized at the expense of poorer school districts. Even to extent of one commenter stating that this is “another example of the rich screwing the poor.” This should be evident from the first table shown here, but just in case further clarification is necessary, the second table represents the amount that the state and the federal government is actually subsidizing these communities.

The CTPost says that the system has been “inequitable for decades.” However, while the formula for funding does not seem to be founded on a sound basis, it is not inequitable or at least there is no evidence, statistical or otherwise to make that conclusion. And, to further imply, as the CTPost seems to do, that there is a racial basis for these fanciful inequities is unfortunately typical of misplaced perceptions from the President on down. 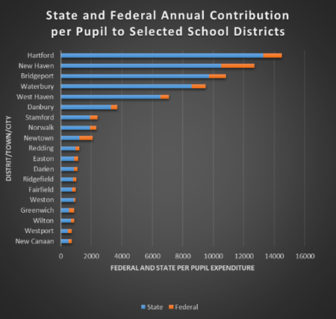 Facts don’t lie but they certainly can be misleading, especially if not presented in context or not presented completely. For example, the state initially responded, and I think correctly, that there is no evidence that additional funding would have any impact on the ameliorating the differences in school/student performance among school districts. Consider the following table.

Based on the limited data in the tables above, there is an extremely high correlation between income and good school performance as well as with the amount of local funding. That is to say, when the parents pay, the students perform. However, when the state pays there is a high negative correlation. This indicates that the greater the state funding – the more poorly students perform. State funding goes up; performance goes down. The relationship between overall funding and performance is fairly weak.

Now, the first thing that one learns in the study of statistics and the thing that is drilled in constantly as one progresses in the field of statistics is, “correlation does not equal causation.” But what this data suggest is simply as stated above that there are other factors that influence a school’s performance and it is foolish to think that additional funding is going to have any positive impact.

One thing that is shown in other unrelated studies is that there is a relationship between the price paid for something and its perceived value. Things that are received gratis are perceived as being less valuable even if the two things are exactly equal. When people pay for something, as in the case of the better-performing schools it achieved higher perceived value, when the state pays and the beneficiary doesn’t, then, the value is diminished.

But an important point to make here is that the government, whether it be state or federal, doesn’t give anyone anything. The government only takes. The state generates no revenue, it provides nothing of value, it simply takes money from its individual constituents and buys things that those constituents may or may not want or need, and redistributes those things.

I can go on, but the point here is that throwing more money at a problem in the absence of any evidence that such action will produce improved outcomes is foolish; to do so in disregard to compelling evidence to the contrary is reckless; and to ignore impact of any other variable is ignorant, in the original meaning of the word  i.e. “to ignore.”

Nick Malino lives in Weston. He had co-managed a hedge fund since 2001 and is a serial entrepreneur, starting, growing and selling four companies. He has a published two books on institutional mergers and acquisitions.