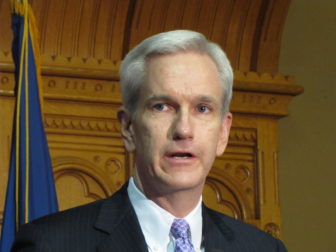 McDonald, 46, of Stamford was confirmed on votes of 30-3 in the Senate and 125-20 in the House, clearing the way for him to resign as Malloy’s general counsel and join the state’s highest court Thursday.

As the long-time co-chairman of the legislature’s Judiciary Committee, McDonald was an influential legal voice in Connecticut. He resigned from the Senate two years ago to join the Malloy administration as legal adviser, a role he played in Stamford when Malloy was mayor.

His sexual orientation was not addressed during a debate in which opponents focused on his lack of previous judicial experience and his sponsorship of a bill in 2009 that Catholics deemed an intrusion into church affairs.

All 23 legislators opposing his nomination were Republicans, though the ranking GOP House and Senate members of the legislature’s Judiciary Committee, which screens nominees, pronounced him qualified, as did the leaders of the Republican minorities in the House and Senate.

“Is he the kind of person that can take the partisan part of his experience in life and set it aside in this new role? Now I don’t think this going to be easy for Andrew McDonald to do that,” said House Minority Leader Lawrence F. Cafero Jr., R-Norwalk. “But I believe he can do that.”

McDonald is one of three justices appointed to the Supreme Court since the 1970s without prior service on a lower court. The others were Ellen Ash Peters, a Yale professor chosen by Gov. Ella T. Grasso in 1978 as the first woman to serve on the court, and Richard N. Palmer, who was chief state’s attorney when named to the court by Gov. Lowell P. Weicker Jr. in 1993.

Two opponents, Reps. Dan Carter of Bethel and Al Adinolfi of Cheshire, said they would have voted to confirm McDonald as lower court judge. “I think he is a great jurist, potentially,” Carter said.

Rep. Livvy Floren, R-Greenwich, whose House district overlapped with McDonald’s Senate district, said she had no hesitation to support him.

In the Senate, three of the 14 Republicans were opposed: Michael McLachlan of Danbury, Joseph Markley of Southington and Tony Guglielmo of Stafford.

Guglielmo did not speak during the debate, but McLachlan and Markley said their opposition to McDonald’s confirmation stemmed from a bill he proposed in 2009 that could have forcibly reorganized the finances of Catholic parishes, mandating a stronger role for parishoners.

Both called it an infringement of religious freedom that made them question McDonald’s fitness for the bench.

“It was a failed bill that attacked the First Amendment of the Constitution of the United States of America and was a direct attack on the Catholic Church of the state of Connecticut,” McLachlan said. “I believe that someone who was willing to take that kind of action in the state legislature is not an appropriate candidate for a Supreme Court justice.”

McLachlan also complained that McDonald failed to respond to a letter he wrote clarifying the nominee’s testimony about the bill during his confirmation hearing. McLachlan had challenged the McDonald’s account that the legislation was offered at the behest of a constituent.

Other Republicans rose to defend McDonald, praising his intelligence and temperament.

“That’s our role as legislators, to fight for things we believe in. That’s not the role of a judge,” said Witkos, who was confident that McDonald would be a fair arbiter of the law.

He is the first lawyer nominated to the seven-member high court without serving as a lower court judge since Gov. Lowell P. Weicker Jr. nominated Richard Palmer.

As a justice, McDonald would bring to the state’s highest court the perspective of a politician who struggled to draft and pass legislation on the death penalty, gay marriage, transgender rights, gun control and drug penalties.

“The Judiciary Committee is the legislative cauldron for all of that,” McDonald said in 2009.

McDonald, who first ran for the state Senate in 2002 as an openly gay politician, was co-chairman of the Judiciary Committee in 2005, when the legislature passed a civil unions law that gave many of the same rights as marriage to same-sex couples.

The law was seen as a stepping stone to marriage, a right the state Supreme Court gave gay couples in 2008.

Like the governor, McDonald was a supporter in the legislature of gay marriage, transgender rights and the abolition of the death penalty.

McDonald is a graduate of Cornell University and the University of Connecticut School of Law. He was a litigation partner at Pullman & Comley, overseeing its appellate practice.

Within minutes of the House vote, McDonald was packing boxes in his second-floor office at the Capitol, stopping only to accept the congratulations of visitors, including Lt. Gov. Nancy Wyman and Mark Ojakian, the governor’s chief of staff.

Once he was confirmed, McDonald no longer could practice law in Connecticut. He will take the oath of office privately Thursday, with a public ceremony expected next week.