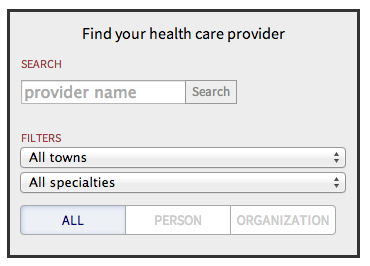 INTERACTIVE: Search the database for your provider, or providers in your town.

Washington – Reporters and lawyers have become the latest front in Washington’s war against medical fraud that, in some way, is unwinnable, even as it has resulted in the prosecution of doctors and drug companies in Connecticut and across the country.

Last year, James P. Ralabate, a Stratford-based general practitioner, agreed to pay $700,000 as part of an agreement with the Justice Department to settle allegations that he and his company, Primary Care Associates, engaged in fraudulent billing at several nursing homes in Connecticut.

Each year, medical fraudsters steal at least $70 billion from the federal government — probably a lot more. Most of it comes from fraudulent bills submitted by doctors, hospitals, pharmaceuticals and medical equipment salesmen.

The latest effort by the administration to combat medical fraud was the release last week by the Centers for Medicare & Medicaid Services (CMS) of data on hundreds of thousands of doctors and medical facilities that billed Medicare in 2012.

An analysis of that data showed that doctors and medical facilities in Connecticut – including ambulance services and diagnostic labs – billed Medicare more than $1 billion last year. And these payments are only for Medicare Part B, which excludes payments to hospitals and other institutions.

Although some of the payments may be very high, they do not necessarily mean that the doctors receiving them have done anything wrong. Officials at CMS said they released the data to try to bring greater transparency to the Medicare system, which has been fraught with fraud.

Federal prosecutors say that during a five-year period, Ralabate billed Medicare for services he supposedly provided to patients in nursing homes when the patients had been transferred to local hospitals for treatment. Yet the doctor billed Medicare as if he had provided medical services in the nursing home, the Justice Department said.

The doctor’s son and office manager, Mark Ralabate, said there was no wrongdoing, and his father settled because he had no choice.

“We were fighting the federal government,” Mark Ralabate said. “Potentially we would have to do that in federal court, and that’s something a solo practitioner is not willing to do.”

The Ralabate case shows the kind of war the Obama administration is waging against medical fraud, a war some say is impossible to win because of the time and money it takes to prosecute scammers.

In 2009, shortly after President Obama took office, his administration set up a Health Care Fraud Prevention and Enforcement Team, known as HEAT, which pairs the Justice Department with the Office of Inspector General at the Department of Health and Human Services.

HEAT has investigated hundreds of cases of medical fraud and has recovered more than $4 billion.

But Patrick Burns, co-director of Taxpayers Against Fraud, a group of attorneys that represents federal whistleblowers, says the federal government is an underdog in this fight.

The Justice Department deploys about 100 attorneys to fight fraud, and another hundred prosecutors in the offices of U.S. Attorneys are working on the issue. But they’re no match for the scope of medical fraud, Burns said.

“In any single day, one company can keep that many attorneys at bay,” Burns said.

He said successfully prosecuting scammers requires the help of whistleblowers who, under a federal law, can receive a percentage of the money recovered from fraud.

According to the data released by CMS, the top Medicare biller in the state was Quest Diagnostics, a lab in Wallingford that billed $24.5 million to provide services to nearly 160,000 patients.

The doctor with the most billings was Hamden ophthalmologist Nauman Chaudhry, who received more than $5 million from Medicare.

In fact, nine of the top 10 Connecticut doctors, in terms of the amount of billing, were ophthalmologists. Five of the top 10 doctors — Jerry Neuwirth, Michael Ruddat, Peter Judson, Marion Stoj and Andrew Packer — work together in a clinic called Retina Consultants that has facilities in Hartford, Cromwell, Enfield and Manchester. Those five doctors billed Medicare nearly $20 million in 2012.

Nationally, the doctor who received the most money from Medicare in 2012 — $21 million — was a Florida ophthalmologist.

The high cost of the Florida doctor’s services was due, in part, to his use of Lucentis, an expensive drug that’s injected into the eye to treat a kind of age-related macular degeneration. There is a cheaper alternative to Lucentis.

Chaudhry, the Hamden ophthalmologist, did not return calls requesting comment, nor did any of the doctors at Retina Consultants, so it’s unclear why they are at the top of the list of Medicare Part B billing in Connecticut.

Bark, but no bite

The American Medical Association and other groups representing doctors opposed the release of the Medicare data. AMA President Ardis Dee Hoven said it could mislead people into making “inappropriate and potentially harmful treatment decisions and will result in unwarranted bias against physicians that can destroy careers.”

But CMS officials said they released the data with the hopes that reporters and lawyers would help them ferret out fraud.

“For too long, this information was not made public,” said Jonathan Blum, principal deputy administrator at CMS.

Niall Brennan, acting director at the CMS Offices of Enterprise Management, said the data show that medical spending varies widely by geography – with Connecticut among the most expensive areas.

But, he said, cost-of-living factors cannot cover all variations in billings.

The CMS release has prompted attorneys like Burns to start mining the data.

Burns said he’s been trying to obtain the information for more than three years, but there was tremendous pushback from the AMA and other medical organizations.

Even as he welcomes the release, Burns said it’s difficult to determine wrongdoing out of the data dump.

“You become literally numb from the numbers,” Burns said. “It’s too much information, and at the same time, not very well explained.”

Thousands of doctors have been “exempted” from the Medicare program because of fraud.

Among them is Richard Sokoloff, a Guilford podiatrist who pleaded guilty to charges of billing Medicare $200,000 for the treatments — that were not performed — of ingrown toenails.

But many doctors, like Ralabate, settle allegations and stay in the system.

There are many ways to defraud Medicare and other government health programs besides billing for services not performed, including padding a bill and kickbacks from drug companies for using their product, even when it’s more expensive and less effective than alternatives.

And doctors are often not at the center of medical fraud.

Hospitals, pharmaceuticals, medical device makers and even organized crime have been involved in scams.

Anyone with a good laser printer and a post office box can defraud the federal government.

Burns said the biggest scammers are major hospital chains and pharmaceutical companies. But he said they are “too big to fail” and most likely to pay fines to settle allegations.

“Not only does nobody go to jail, but the people who are involved in fraud are not excluded (from federal health programs),” Burns said. “Then the fines are paid by stockholders.”

In 2012, Ridgefield-based Boehringer Ingelheim Pharmaceuticals Inc. paid $95 million to settle a lawsuit brought by a whistleblower who detailed alleged kickback programs and “off-label” marketing of certain drugs for unapproved uses, defrauding Medicare and other government health care programs of millions of dollars.

In a statement, Boehringer Ingelheim said it entered into an agreement with the Justice Department, HHS and the Office of Inspector General “to resolve allegations related to marketing and sales practices of Aggrenox, Atrovent, Combivent and Micardis during the years 2000 through 2008.”

“The pharmaceutical industry has undergone significant changes over the past decade and continues to be under intense scrutiny,” the statement said. “Likewise, our internal processes and compliance practices have evolved significantly, and we are confident that these allegations are not reflective of our current business practices.”

Burns would like the federal government to “name and shame” companies suspected of fraud, excluding them from Medicare and other federal health care programs.

“If all you do is bark, and you never bite, people will lose respect,” he said.