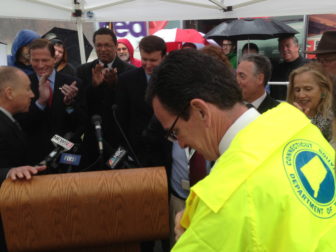 Waterbury – Gov. Dannel P. Malloy flexed the powers of incumbency Tuesday in a rain-swept commuter lot by I-84. Malloy couldn’t stop the rain, but he could command a supportive audience of political, union and business leaders.

One after another, they stepped to a microphone to thank the first-term Democratic governor, a candidate for re-election this year, for planned investments in transportation infrastructure, even if the pace of those investments has been a source of frustration to some on his guest list, who see a growing backlog of overdue projects.

The event was staged at one of the state’s most notorious commuter bottlenecks, a two-lane, 2.7-mile stretch of I-84 on the approach to Waterbury from the east. A third lane will be added in both directions at an estimated cost of $400 million to $450 million, with the project going to bid in June.

But the state continues to lose ground in maintaining its infrastructure as measured by the growth in the backlog of what the DOT refers to as “major long-term, unfundable initiatives.” Those are projects that must be addressed, but have no identified funding source. Not long ago, the I-84 widening project was on that list.

“We’ve been saying for years this is not acceptable,” said Joseph McGee, vice president of the Fairfield County Business Council. “So I think this is a good recognition on the part of the governor that he gets it. He wants us to know he gets it. But the proof is in the pudding.”

Funding commitments are what business, labor and transportation advocacy groups want to see from this administration and the next, whether it is a second Malloy administration or one led by one of the half-dozen Republicans seeking the job, McGee said.

“In fairness to Malloy, this is not a problem he created. This has been a 40-year problem in the making, the underinvestment in our infrastructure. The point is, it’s got to be addressed. We’ve had the wake-up call,” McGee said.

Malloy was talking highways Tuesday, but the wake-up call McGee referred to was a string of incidents highlighting the need for improvements to Metro-North, the commuter rail line that ties Fairfield County to New York City.

The governor has been criticized for using the state’s capacity to borrow to offer economic development aid at a time when basic infrastructure needs were unmet. He said Tuesday that he has tried to provide funding as projects were ready to go to bid.

Transportation Commissioner James Redeker said the I-84 project was taken off the unfundable list as the agency saw other projects come in under budget. Site preparation work will begin this year, with major construction starting next spring on what is expected to be a five-year project.

“It was really just resources. We were able to cobble enough money together,” Redeker said. “It’s a decade overdue, and we’re happy to be starting it.”

U.S. Sens. Richard Blumenthal and Chris Murphy, U.S. Rep. Elizabeth Esty and Mayor Neil O’Leary were among the elected officials to join Malloy, Redeker and others under a white canopy that shook in the wind. The members of the congressional delegation talked about their efforts to deliver more federal transportation funds.

Murphy and Esty, who both live in nearby Cheshire, said they are among the commuters often caught in the bottleneck. Murphy guessed he’s spent a year of his life stuck there.

Roche’s union, which was hard hit by the recession, has been one of Malloy’s strongest supporters, defending a Hartford-to-New Britain busway project that’s drawn Republican opposition in the General Assembly.

“I could tell you that two years ago, we had 50 percent unemployment. Today I’m looking for workers,” Roche said.

Roche said said the state spending on transportation projects was crucial, since it came as Congress allowed extended unemployment benefits to expire.

“We were devastated. We didn’t know where to go. You know what saved us? Gov. Malloy and the state of Connecticut saved us,” Roche said. “We are team Connecticut. We are always going to be team Connecticut, and all we ask for is an opportunity to go to work, and today we have that.”

Two of the GOP candidates for governor said the press conference Tuesday was a thinly disguised campaign event.

“This is an investment he could have made four years ago,” said Danbury Mayor Mark Boughton. “Instead he waited until the last year of his term.”

“Why has he waited over three and a half years to do this?” asked Senate Minority Leader John P. McKinney of Fairfield. “Clearly the timing does appear to be more related to getting him re-elected as opposed to any public policy.”