The Department of Social Services is seeking approval to hire dozens of additional workers to comply with a proposed settlement to a class action lawsuit alleging that delays in processing Medicaid applications have left poor state residents waiting months to get coverage and care.

Those positions would be in addition to 103 new positions for the department included in Gov. Dannel P. Malloy’s proposed budget for the coming fiscal year.

Because of the cost, the settlement must be approved by the state legislature. It must also receive court approval after a hearing and written comment period.

Waiting for care, skimping on meds

But thousands of applicants have waited longer.

One, Paul Shafer of Trumbull, applied for Medicaid in July 2011. While he waited for DSS to process his application, he took half the prescribed dose of his costly anti-seizure medication and at one point, had a major seizure. His Medicaid application wasn’t approved until January 2012 — the day after the lawsuit was filed, with him as a named plaintiff.

The settlement would require that DSS process at least 92 percent of Medicaid applications submitted each month within the federally required time frame — 45 days, in most cases. It gives DSS until next April to comply, but establishes lower benchmarks to meet beginning in August.

Some long-term care applications that take longer could be excused — and not counted toward the 92 percent requirement — if DSS staff send out notices and requests for information promptly and the delay is not the agency’s fault. There’s no similar leeway for other Medicaid applications that are delayed, regardless of who’s at fault.

The settlement would also limit the percentage of overdue applications that could be pending at the end of a calendar month.

In addition, the settlement would require DSS to maintain the current timeliness standards used in a contract with Xerox to process medical bills for people with a Medicaid spend-down. That program allows people whose income is slightly too high for Medicaid to receive coverage if they spend their excess income on unreimbursed medical bills.

As written, the settlement would be in effect until July 1, 2017. Under the terms, DSS would pay $320,000 in fees and costs for the plaintiff attorneys.

How many workers does DSS need?

“The proposed settlement is a reasonable compromise to end this litigation,” he said. “If approved by the General Assembly, DSS expects to hire 35 additional eligibility staff for processing long-term care applications.” 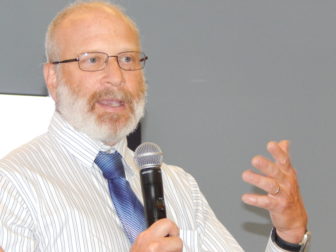 Sheldon Toubman, an attorney with the New Haven Legal Assistance Association, one of the plaintiff attorneys.

The settlement doesn’t direct the agency to hire more workers, but DSS staffing levels have been at the heart of the lawsuit, which went to trial last spring.

While demand for Medicaid rose by 88 percent from 2002 to 2012, the number of DSS workers handling eligibility for social service programs fell by about 30 percent during that period, from 845 to fewer than 586, according to court documents.

In 2012, after the lawsuit was filed, DSS hired 220 more eligibility workers, bringing the total to about 881.

DSS officials have maintained that modernization efforts, including digitizing records and changing work processes, would make it possible to accommodate the workload without adding staff.

This year, Malloy proposed adding another 103 positions at DSS, although not all would be for processing eligibility. In their budget proposal, Democrats in the legislature added another 17 positions beyond what Malloy proposed. Dearborn said the department will work with legislative leaders on funding for the other 18 positions.

“We’re going in the right direction finally, so we’re very pleased about that,” said Sheldon Toubman, who represented the plaintiffs along with Shelley White. Both are attorneys with the New Haven Legal Assistance Association.

A new way of processing applications

The way most Medicaid applications are handled has changed since the lawsuit was filed. Most are now processed through an automated system that produces immediate eligibility determinations.

The new system, which is part of Access Health CT, the state’s health insurance exchange, gives applicants who qualify a letter that can be used as proof of coverage when getting care or filling a prescription.

But more work has to be done to get the person into DSS’ eligibility management system, which is needed for the person to receive a Medicaid card or to be entered into the system used by providers to verify coverage. That process requires Xerox staff, working under a contract with DSS, to manually enter information from the Access Health system into the DSS system.

Advocates say delays in that process are problematic because many clients have found that doctors’ offices or pharmacies don’t accept the letter as proof of coverage.

Under the settlement, cases handled through the Access Health system would be considered processed only after the information is entered into the DSS eligibility management system or another system that providers can use to verify if the person is eligible for Medicaid.