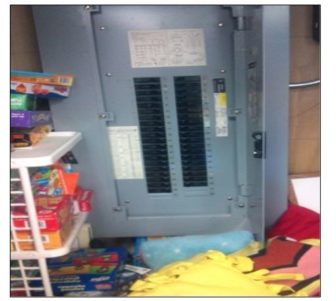 An electrical panel located in a classroom, accessible to children, in a day care center that had been inspected by the state.

Connecticut inspects day care centers too infrequently and the inspectors don’t have enough time to spend on each case, federal officials said in a report issued Monday that identified health and safety risks to children in state-inspected facilities.

In one case, federal reviewers visited a day care center that had been inspected the month before, but they still uncovered 11 potentially hazardous conditions and five playground safety problems. In two of the three state-inspected day care centers the reviewers visited, they found violations that included a fuse box accessible to children; a first-aid kit, shaving cream and hair gel within reach of children; and exposed wiring in a gazebo used by youngsters.

And while the national organization calls for inspectors to have caseloads of 50 day care providers, the number of inspectors and programs in the state translates to an average caseload of 332 day cares per inspector, according to the report.

That could change: Gov. Dannel P. Malloy’s proposed budget for the upcoming fiscal year includes $1.5 million to hire 28 staff to handle day care licensing and inspections. A spokeswoman for the Office of Early Childhood, which is expected to assume responsibility for child care programs, said the proposed new funding would allow for annual inspections of licensed child care settings and faster background checks for prospective day care employees. The proposal must still clear the legislature.

The report released Monday is the latest to highlight problems in Connecticut’s oversight of child day care facilities.

Last year, an audit of 20 home day care providers found that all 20 failed to comply with at least one licensing requirement related to health and safety. The audit by the HHS inspector general’s office said the state’s policy of inspecting home day cares once every three years was problematic. At the time, a spokesman for the Connecticut Department of Public Health, the state’s licensing agency, said the agency agreed with the findings but didn’t have the money to inspect more often.

A 2012 review by state auditors raised concerns about the department’s licensing of day care providers without performing the required criminal records checks. State law requires prospective day care employees to submit to state and national criminal records checks, and requires the Department of Public Health to check if the prospective workers are included in the state’s child abuse registry. But the auditors found that three newly licensed day care centers in the 2009 fiscal year got licenses even though some employees’ background checks hasn’t been completed. And the auditors found that the results still hadn’t been received three years later.

A protruding, uncovered bolt in an outdoor play area at a Connecticut day care center.

The report released Monday also identified three cases in which day care center employees had not received the state-mandated criminal records checks and three in which workers’ files didn’t reflect a check of the state’s child abuse registry.

In a response included in the report, Connecticut Social Services Commissioner Roderick L. Bremby wrote that the state concurs with the federal agency’s findings and supports the concept of increased inspections.

As for improving the criminal records check process, Bremby wrote that the state is reviewing its options, but he noted that “resulting outcomes will need to be considered against available State appropriations.” He said factors outside the department’s control have impacted the agency’s ability to find an immediate solution, including restricted access to fingerprinting machines and an automated process for analyzing and disseminating criminal history check results.

Another potential hazard: Shaving cream within reach of children at a day care center.

The review released Monday involved checks of three day care centers in Waterbury, New Britain and Hartford, in October 2012. The centers were selected based on factors including previous health and safety findings and the number of children served, according to the report, which did not name the centers.

All three facilities had been inspected by the state, but two of the three failed to comply with licensing requirements related to their physical conditions. Both facilities also did not comply with the required criminal records and protective services checks for all employees, according to the report. The third facility had no violations identified in the report.

“On the basis of our discussion with State officials, we determined that noncompliance with State requirements occurred because the inspections are too infrequent and the inspectors are responsible for too many providers, limiting the amount of time spent on each inspection,” the report said.

Although the Department of Public Health handles licensing, the Department of Social Services is the lead agency for the state’s Care 4 Kids program, which helps poor families pay for child care and is funded by a federal grant. The inspector general’s review was aimed at determining whether health and safety risks exist among day care providers that receive funding through the grant.

Bremby noted that the state’s recently created Office of Early Childhood is expected to consolidate several child care programs, including day care center licensing and child care subsidies, and will take the lead in responding to the issues raised in the report.

by Kelan Lyons and Jenna Carlesso

The state attorney general's office refused Tuesday to disclose the amount of the settlement it reached with Tianna Laboy.

Hospital officials so far have said they are not pulling back on elective surgeries and outpatient procedures as they did in the spring – a move that allowed them to shift staff and other resources to the growing number of coronavirus patients.

The pandemic has forced diabetics to cope with an even heavier burden of financial, physical and mental health needs.