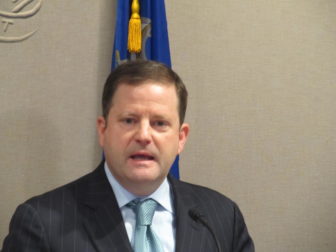 With early analyses of state income tax returns showing that revenue could fall short of what’s been budgeted, the top Republican in the state Senate renewed his call Wednesday for Gov. Dannel P. Malloy to scrap his controversial tax rebate plan.

Senate Minority Leader John P. McKinney of Fairfield urged the Democratic governor to cancel the rebate program, which is expected to cost $155 million, in light of mounting fiscal challenges.

“A $55 rebate in lieu of permanent and meaningful tax cuts is an insult to taxpayers that should never have been proposed in the first place,” said McKinney, who also is running for governor this year.

A statement from Malloy’s communications director, Andrew Doba, said, “Governor Malloy’s proposal to issue a refund to taxpayers is part of an overall effort that will put money in the rainy day fund, pay down our long-term obligations and provide some necessary tax relief for residents. If Senator McKinney was so concerned with gimmicks, he wouldn’t have put out a Republican “budget” that included a $120 million dollar tax increase on working families and $54.8 million in phantom, unspecified cuts that are not detailed anywhere.”

Though the current budget shows a $500 million surplus, Malloy and his fellow Democrats used borrowing and other gimmicks to push off hundreds of millions of dollars in operating costs until after the November elections. The legislature’s nonpartisan Office of Fiscal Analysis says state finances face a built-in deficit of $1 billion, or about 6 percent, in the first new budget after the election.

That picture could worsen soon.

Nonpartisan analysts tracking state income tax filings since the April 15 deadline say receipts for this month – based on returns filed through Tuesday — could fall almost $205 million short of expectations.

Income tax receipt totals fluctuate by wide margins daily in the first few weeks after the deadline. But if those numbers hold it would:

“The latest report by OFA about declining personal income tax collections makes the (rebate) gimmick not only insulting, but also irresponsible,” McKinney added.

Malloy and the legislature are expected to negotiate a final compromise budget for the 2014-15 fiscal year before the legislative session ends May 7.