The Basics: An effort to create universal pre-k in CT 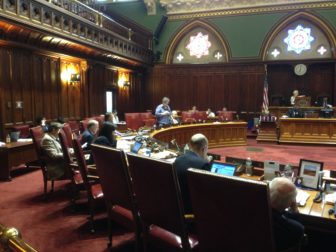 The state Senate voted 33 to 2 on Friday for a bill aimed at moving the state toward “universal access” to preschool in Connecticut. The bill merges separate proposals from Democratic legislators and Gov. Dannel P. Malloy to expand the number of state-subsidized preschool seats starting next school year.

The bill, Senate Democratic leaders told reporters Friday, will open 1,020 additional seats for children from low-income districts in school readiness programs throughout the state for the coming school year, as the Democratic governor proposed. Both public and private providers offer school readiness programs. Over the next five years, the leaders said an additional 4,010 seats will become available at a cost of $51 million a year for these high-need districts, where a high number of students show up for kindergarten with no early education experience.

The bill also will launch the Democratic legislators’ “Smart Start” proposal to spend $10 million a year expanding enrollment in public preschools in districts throughout the state. The bill caps the annual grant districts can receive at $300,000, which would pay to either enroll 60 preschoolers in the new programs or open four new preschool classrooms.

Funding for these additional seats will not become available until the 2015-16 school year, while the governor’s 1,020 seats will be ready by next year.

The Democratic legislators’ plan, they say, would help between 4,000 and 5,000 additional students a year enroll in prekindergarten. Only local school boards are eligible to receive the funding, and the classrooms taught by a certified teacher cannot exceed 18 students. The “Smart Start” portion of the bill relies on local districts contributing, and some parents paying tuition to open more classes.

Children from districts with high concentrations of poverty will benefit the most. Over the next five years, an additional 4,000 children from districts like Bridgeport, Hartford and Waterbury will be enrolled in quality preschool programs. Additionally, legislators intend to spend $10 million a year in districts across the state, including suburban districts, a seat in a public preschool classroom.

There has been universal support for expanding early education opportunities for those who cannot afford it. In his State of the State speech, the governor earlier this year called on the General Assembly to pass a bill aimed at providing universal access to preschool.

Private providers were initially concerned that the legislators’ proposal expanded preschool only in public schools. This bill provides an almost 50-50 split of new seats in public and private programs.

The Office of Early Childhood will determine which districts and providers will receive the money. But first, the House also must pass the bill, which is expected.