GOP relies on Malloy ‘gimmick’ to balance its budget plan 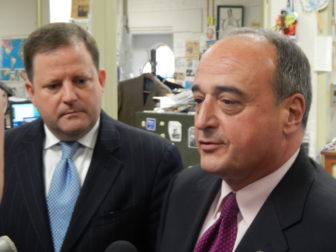 Faced with shrinking state tax receipts, minority Republican legislators Thursday grudgingly used one of the largest “gimmicks” they had chastised Gov. Dannel P. Malloy for in their latest budget proposal.

The GOP caucuses in the House and Senate unveiled a plan that relies on refinancing the state’s 2009 operating debt to remain in balance – an option they refused to include in a budget they proposed just two weeks ago.

Republican leaders defended their new budget, noting that regardless of what they proposed, Malloy and his fellow Democrats in the legislature’s majority already have begun refinancing that debt.

“Governor Malloy’s budget has come apart at the seams, sending everyone back to the drawing board with just one week remaining in the legislative session,” said Senate Minority Leader John McKinney.

The GOP dramatically scaled back its proposals for tax cuts, which had relied heavily on the $505 million surplus that had been projected for the current fiscal year, which ends June 30. A new report Wednesday from analysts showed income, sales and corporation tax receipts running well below projections, and that all but $43 million of the surplus has disintegrated.

That also prompted analysts to reduce revenue projections for 2014-15, a problem that pushed both Democratic and Republican budget proposals for that fiscal year about $280 million in the red.

Republicans scaled back plans to eliminate a remaining $60 million unemployment compensation fund assessment on businesses, instead offering $15 million in tax relief. Proposals to eliminate the sales tax exemption on nonprescription drugs and to accelerate the restoration of a sales tax break on clothing and footwear were dropped.

But the GOP budget still calls for the repeal of keno. Malloy and Democratic legislators enacted a budget last spring that allows the state to launch the electronic, lottery-like game later this year in hundreds of restaurants and bars.

It also retained a controversial proposal to eliminate the Earned Income Tax Credit within the state income tax system, a credit that saves working poor families about $120 million per year.

To help balance their plan, Republicans proposed a hiring freeze, a travel ban and cuts to legislative management services. They also relied on nearly $50 million in cost-efficiencies recently vetted by nonpartisan analysts – a spending cut Democrats also are expected to use in the 2014-15 budget they adopt before the legislative session ends May 7.

“There are no gimmicks,” McKinney said.

One of the biggest budget gimmicks the GOP has decried happened last spring when Democrats refinanced the state’s 2009 debt, saving the state from making having to make $196 million in debt payments this fiscal year and next.

Those payments, plus interest, must be made up starting in the first new budget after the state elections in November.

When Republican lawmakers unveiled their first budget plan for 2014-15 on April 17, they symbolically rejected that refinancing, restoring a cash payment on the 2009 debt and using some of this year’s surplus to cover it.

But now that the surplus is gone, the Republicans’ latest budget no longer rejects that borrowing “gimmick.”

“You’re absolutely right,” Cafero said, when asked about that by The Mirror, before adding several qualifying statements. “We have to deal with the cards we are dealt. … It is their (Democrats’) budget, they own it.”

Cafero added that the Republican plan also would dedicate any future surplus dollars exclusively toward retiring the 2009 debt early.

“This document is anything but honest,” Malloy spokesman Andrew Doba said. “And it cuts millions from public education while raising taxes on working families.  Talk about fumbling the football on your own one yard line.”