House aims for Saturday vote on a budget without keno 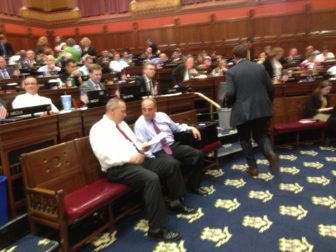 The prospect of keno being introduced into hundreds of bars and restaurants shortly before the fall elections was enough to encourage legislators and the administration of Gov. Dannel P. Malloy to delete keno revenue from a budget now likely to come to a vote Saturday.

“There was reluctance and misgiving on the part of legislators and the governor to go forward with keno,” said Senate Majority Leader Martin Looney, D-New Haven. “I think the governor finally decided to pull the plug.”

House Democrats applauded Thursday night when told in caucus that a tentative agreement on the budget does not rely on the expansion of legalized gambling, which was approved last year but never implemented.

Several sources familiar with budget negotiations said prior to the caucus that the administration made clear it did not want go ahead with keno, which was projected to produce a relatively modest $26 million a year. Ben Barnes, the governor’s budget chief, hedged after the caucus, declining to pronounce it dead.

But legislators said keno, after being declared dead in February and alive in April, was unlikely to revive again in May. Looney said the legislature intended to act decisively, not merely delete keno revenue from the budget.

“I think there will be explicit language de-authorizing keno,” he said at midnight.

House Majority Leader Joseph Aresimowicz, D-Berlin, said earlier that working assumption was keno would be stripped from the budget, but he warned that elements of the budget remained fluid. He said the plan was “not absolutely set,” and he was among a minority who hoped keno would be retained.

“I’m the one holding out hope we put it back in,” he said.

Thursday was a night of closed-door meetings as legislators mapped out strategies for what bills will be given a final chance at passage as the General Assembly shuffles toward its constitutional deadline of midnight Wednesday. Overshadowing all were talks on the budget.

“We’re hoping to get it wrapped up and voted on Saturday, but we’re prepared to come in Sunday,” Aresimowicz said.

Looney said the goal was for the Senate to give final passage Saturday after the House vote.

The balance of power shifts in the final days of every session from the Democratic majority to the Republican minority, whose main power – the ability to extend debate and eat up time – becomes a de facto veto. Republicans vowed to force a debate and vote on keno.

Without public debate, keno was added to the budget in the closing days of the legislature’s session in 2013, a last-minute way to find some revenue. Now, it appears it will disappear in the same manner.

Polling shows the game is unpopular with the state’s voters, but many politicians are privately skeptical the issue could shift large numbers of voters in a year dominated by economic news.

Nonpartisan analysts estimate the game would yield $26 million annually for Connecticut. In the next state budget, which is expected to spend about $19 billion, this represents one-seventh of 1 percent. 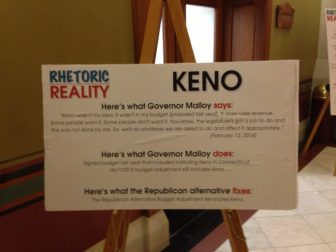 A sign outside the Senate GOP caucus mocked Malloy for his indecision on keno.

The 2013 budget required the Connecticut Lottery Corp. to offer keno once the Malloy administration negotiated profit-sharing terms with the state’s two tribal casinos, which have exclusive rights to offer slot machines. The lottery disagrees, but the tribes consider keno to be a form of slots.

A memorandum of understanding was reached with both tribes, according to sources.

Keno is a centralized electronic drawing game, whose results are broadcast on video screens in bars, restaurants and stores in the states where it is offered, including New York, Rhode Island and Massachusetts. In New York, a drawing is held every four minutes.

Keno was added to the budget last year after legislators balked at a plan to raise money by auctioning off the rights to residential electric customers to retail suppliers. When revenue projections improved, keno’s prospects faltered.

House Speaker J. Brendan Sharkey, D-Hamden, and Senate President Pro Tem Donald E. Williams Jr., D-Brooklyn, all but pronounced it dead in February. Then revenue projections faltered again, and the same leaders suggested two weeks ago it would be difficult to shed any source of revenue.

Late Thursday afternoon, even though revenue projections had worsened even further, sources close to the budget negotiations said the Malloy administration decided the political price for the game was not worth $26 million.