The frenetic last days of the ’14 session? Not so much 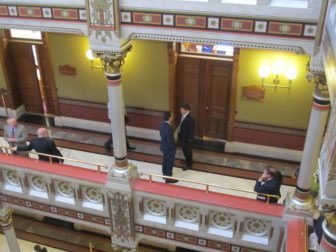 The General Assembly moved languidly Monday as the Republican minority stretched out debates in both chambers, a delaying action they say will continue until Democrats produce a budget implementer bill that the GOP suspects will be packed with political goodies.

The implementer is a supplement to the state budget, supplying language that explains policy changes related to the appropriations. As must-pass legislation, it also is one of the legislature’s favorite end-of-session places to attach amendments.

To a casual observer Monday, it would have appeared that a consumer protection bill for electric customers was failing in the House, where an endless parade of Republicans rose to pose questions about the bill.

Not so, as House Minority Leader Lawrence F. Cafero Jr. reassured an AARP member who approached him outside the House chamber.

But Cafero, whose minority can control the flow of business in the annual legislative session’s last days by simply talking, said few other bills will pass until Democrats share the implementer that the GOP expects to run some 1,100 pages.

“As soon as the bill is ready, we’ll share it,” he said. “There are a lot of moving pieces.”

In the Senate, legislators turned a debate over a moratorium on the disposal of fracking waste – a bipartisan compromise that was expected to eventually pass nearly unanimously – into an all-day clinic on the hydraulic fracturing process used to extract natural gas from shale.

No one objected when the Senate took a break of more than two hours to salute two departing senators, Democrat Ed Meyer of Guilford and Republican Jason Welch of Bristol. It was preordained that no other bills would be approved until nightfall.

Senators offered Meyer and Welch long testimonials, then they resumed the fracking debate, after a fashion. By 7 p.m., Sen. John Kissel, R-Enfield, was weaving travelogue about a trip to Loch Ness in his extended comments on fracking. In the 36-member chamber, he spoke to 30 empty chairs.

The bill eventually was placed without objection on the Senate consent calendar.

The General Assembly began the final three days of its 2014 session Monday with 56 bills already passed and sent to the governor – and 296, five times as many, awaiting final action in one chamber after winning passage in the other.

Most of the action Monday took place off the floors of the House and Senate. The governor’s chief of staff, Mark Ojakian, paced the halls, looking for certain legislators and lobbyists, his exact agenda unknown.

Ben Barnes, the governor’s budget chief, had his own series of meetings. By late afternoon, legislators say that another bill related to the budget adopted early Sunday had become a source of conflict: the bond package, which determines what capital projects will be financed in the coming year.

Gov. Dannel P. Malloy was spotted late Monday afternoon outside the office of Sen. John Fonfara, D-Hartford, the co-chairman of the Finance, Revenue and Bonding Committee. He and Fonfara chatted, as one of Malloy’s legislative aides stood by.

One of the bills awaiting final action in the Senate was one of Malloy’s bills. He proposed new financial reporting rules on nursing homes at the request of a union ally, SEIU 1199 New England. Senate leaders told SEIU lobbyists they planned to call the bill Monday night and stay as long as it took for passage. (The bill was called at about 8:30 p.m.)

Malloy shrugged off a question about what was on his personal must-have list as the session winds down.

“I don’t have a personal must-have list,” Malloy said. “I have what I need.”