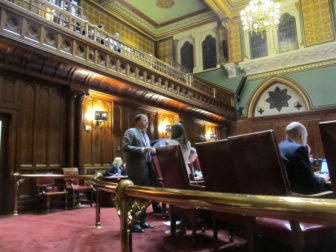 The Senate voted 24 to 11 to create a Nursing Home Financial Advisory Committee to regularly examine the financial solvency and quality of care of nursing homes.

Senate Minority Leader John P. McKinney, R-Fairfield, and two other GOP senators, Kevin Witkos of Canton and John Kissel of Enfield, joined all 21 Democrats present in support. Democrat Andrea Stillman of Waterford was absent. It passed the House last week, 86 to 57, without a single Republican vote.

Sen. Gayle Slossberg, D-Milford, whose district is home to one of the five union and three non-union facilities managed by HealthBridge in Connecticut, said she originally was skeptical about the need for the bill, but she eventually concluded that the state Department of Social Services did not have the means to properly monitor the company’s finances.

“DSS couldn’t really tell if it was financially distressed at all,” said Slossberg, who defended the bill during a debate of more than four hours. “I really think this is a necessary thing to do.”

Slossberg said HealthBridge misled the state, the public and the union about its financial condition, a pretext to break union contracts. The company says it was losing money on the Connecticut homes under union contracts, but the union and the National Labor Relations Board say the company fabricated its losses by self-dealing among related companies.

The bill requires every for-profit nursing home that receives state funding to include with its cost report to the Department of Social Services an annual profit and loss statement from any related party that receives $50,000 or more for providing goods, fees and services to the nursing home.

HealthBridge unilaterally eliminated pensions, boosted employee health costs and changed rules to reduce overtime, sparking a strike in 2012. The company said its finances left it no choice but to make the cuts or close some homes.

A bankruptcy judge in New Jersey has ruled for the company, saying it should be allowed to dissolve its labor contracts. But a federal judge in Hartford, Robert N. Chatigny, has upheld the NLRB’s finding of unfair labor practices and held the company in contempt for refusing orders to rehire striking workers and restore benefits. The case is under appeal.

HealthBridge says it is a victim of a politically connected union, whose picketers have been joined at times by Malloy and other Democratic politicians. The company has sued SEIU, accusing it of racketeering.

“The SEIU has never hesitated to cozy up to politicians, providing them with both on-the-ground organizational support and all-important financial support,” HealthBridge says on its website. The union says the claim is “ridiculous” and without foundation.

Matthew V. Barrett, who represents the industry, watched the Senate debate Monday night from the west gallery, while SEIU’s president, David Pickus, and other union representatives faced him from the east gallery. Both galleries were nearly empty of spectators.

The bill is an overreaction to one company’s labor fight, Barrett said. The industry tried and failed to convince the legislature to narrow the reporting requirements and rely on evidence of financial distress to go deeper as warranted, he said.

“We should have come up with a solution to address HealthBridge,” he said.

“It’s random digging,” said Sen. Joseph Markley, R-Southington. “This bill as written is an injustice to the corporations.”

Pickus said the bill is a reaction to the evolution of the nursing home industry, where inter-related companies now are the norm. With the state providing about $1.6 billion in Medicaid payments to the industry, closer financial oversight is overdue, regardless of SEIU’s fight with HealthBridge, he said.

“We’re not getting any unfair advantage,” he said of the new law.

Pickus said the law requires HealthBridge and other companies that rely on tax dollars to be more financially transparent. The industry operates 221 homes in Connecticut; 75 are unionized.