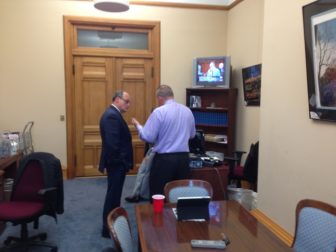 The General Assembly moved fitfully through the last day of its 2014 session Wednesday, as the Senate offered six hours of tributes to departing leaders and House Republicans voiced at length their opposition to a fracking waste bill, preludes to a final burst of deals and votes before midnight adjournment.

“A reminder to senators to stay close to the chamber,” Senate President Pro Tem Donald E. Williams Jr., D-Brooklyn, told senators after 8 p.m., warning them of the frequent roll call votes about to come. “It’s going to be fast and furious between now and midnight.”

In quick succession, the Senate and House approved a hospital regulation bill that had been the subject of fierce lobbying by the hospital industry and labor unions representing health care employees. It removes an obstacle in existing law that makes it difficult for hospitals to operate as for-profits in Connecticut. But it also gives the state more oversight on sales of nonprofit hospitals and new regulatory authority over transactions involving physician practices.

The last major piece of business was passage of a 314-page supplementary budget bill, a last chance, catch-all measure packed with provisions from bills that failed to win passage during the 13-week session that began Feb. 5 and ended by constitutional mandate at the stroke of 12. Final passage in the Senate came minutes before adjournment.

The contents of the bill, as was the case with nearly anything else that happened Wednesday, were the result of the Democratic majority’s negotiations with the Republican minority. The GOP enjoys veto power on the last day, when it can block all business by prolonging debate.

A House GOP filibuster on a bill imposing a three-year moratorium on the disposal in Connecticut of wastes generated by fracking, a method of natural gas extraction, was resolved through a trade that discomfited some environmentalists: It required lifting a statutory ban on fishing for glass eels, a vulnerable species.

The House voted 92 to 52 to lift the statutory ban, but the establishment of a fishery is contingent on approval by the Atlantic States Marine Fisheries Commission. The interstate agency regulates the taking of glass eels, which are juvenile, translucent American eels that can command prices of $2,000 a pound.

The U.S. Fish and Wildlife Service and the National Marine Fisheries Service declined a petition in 2007 to place the American eel under the protection of the Endangered Species Act. It is now conducting a more extensive study after evidence of declining eel populations.

“The Atlantic States Fishery Commission will determine if Connecticut has any allocation,” said Rep. Craig Miner, R-Litchfield, the sponsor of the bill. Miner also was a leader in the fracking filibuster.

Sen. Ed Meyer, D-Guilford, the co-chairman of the Environment Committee, said Miner wants a chance to show that a commercial eel fishery can be established in Connecticut. The fracking moratorium would have been the price of denying Miner that chance, Meyer said.

The Senate passed the bill unanimously at 11:30 p.m., sending an aide on a sprint to the House to inform legislators there that the Senate had acted. At 11:51 p.m, the House voted 128 to 19 to give final passage to the fracking bill. 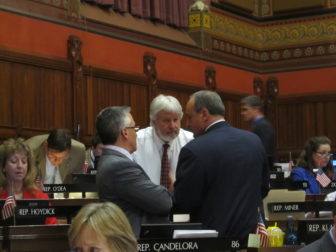 Rep. Craig Miner, center, the central player in the fish for fracking deal.

The peaceful resolution to the protracted hospital fight was unexpected. As late as Wednesday afternoon, it wasn’t clear whether any measure would be crafted that would satisfy all sides and pass both chambers.

Sen. Leonard Fasano, R-North Haven, said the bill represented a bipartisan effort and nearly two weeks’ worth of work. Legislators could have done nothing and waited to see what happened, he said. “And we would wake up [in] January, February, to either something that was a total mess, perhaps it worked or perhaps it didn’t,” he said. “But with this piece of legislation, we are in control of our destiny.”

Fasano has been concerned about independent practices being acquired by hospitals, particularly by the powerful Yale New Haven Health System, and worries that those who want to remain on their own will be unable to compete in what he sees as an increasingly uneven playing field. Even as he praised the bill, he warned that the legislature “needs to watch what’s going on” to make sure workers and patients are treated fairly.

Paul Filson, the political director of SEIU 1199 New England, said it became clear that something was going to happen about an hour before the bill passed the Senate. Union officials agreed to it, believing there were some protections for workers and communities in the measure. And, he added, they weren’t sure it would be a good idea if nothing passed.

The measure that passed came together with input from unions, hospitals, both chambers of the General Assembly and the Malloy administration, although Filson noted that the union and hospital representatives never negotiated directly with each other. 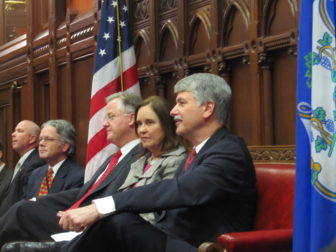 After a handshake, Sharkey and Williams take their seats, separated by Secretary of the State Denise Merrill.

As is often the case, a trickle of legislation turned into a torrent on the final evening. On one consent calendar adopted at 11:30 p.m., the Senate gave final passage to more than 50 House bills, compared to 62 for the previous 12 weeks and six days.

The Senate gave final passage to a measure legislators have considered many times, allowing adults who were adopted access to their original birth certificates. The bill that passed limits access to people over 18 who were adopted on or after Oct. 1, 1983.

For the second year in a row, labor advocates fighting to remove limits on mental health benefits for workers suffering from post-traumatic stress disorder were unable to get a bill passed.

But Sen. Catherine Osten, D-Sprague, who began the push to broaden eligibility – particularly for non-emergency personnel who nonetheless face on-the-job trauma — pledged to renew her efforts in 2015.

A bill that died Wednesday on the Senate calendar would have modified the workers’ compensation system, allowing employees to qualify for benefits if, while performing their duties, they witnessed a person’s death or maiming, or the immediate aftermath of such action. 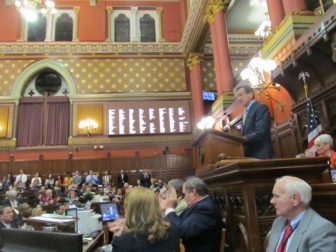 A licensed psychiatrist or psychologist also would have to diagnose any employee who witnessed this with mental or emotional impairment in order for benefits to be awarded.

Osten, who began pushing to broaden the workers’ compensation system after the December 2012 shooting tragedy at Sandy Hook Elementary School in Newtown, said the current definition is too narrow.

Post-traumatic stress disorder benefits primarily are limited to police and firefighters who witness a colleague killed in the line of duty.

But Osten noted that teachers, maintenance staff and many other school and municipal employees were emotionally scarred by the tragedy that claimed the lives of 26 children and educators.

But the chief lobbying agency for cities and towns, the Connecticut Conference of Municipalities, has fought the bill intensely, arguing that it would be a costly mandate on local budgets.

“CCM values the service of its employees – in particular, first responders,” said Robert Labanara Jr., CCM’s state relations manager. “The issue of determining how to assist employees who are affected by certain events must be solved via a statewide solution. No individual municipality should be mandated by the state to shoulder the expense of special benefits and administrative — legal, medical, etc. — costs from stress claims as a result of someone having witnessed the aftermath of a crime, or injury.”

The Hamden Democrat has sought to end the longstanding exemption that major nonprofits enjoy from paying local property taxes.

The speaker, who has been at odds with Senate President Pro Tem Donald E. Williams Jr., D-Brooklyn, in recent weeks, was unable to get his plan through that chamber, despite scaling it back twice.

But when the House and Senate met jointly for the traditional end-of-session speech by the governor, Sharkey greeted Williams with an extended hand, and the two men shook.

To McKinney, who is running for governor, Malloy smiled and said, “I wish you luck in the future, not necessarily as much luck as I wish Don.”

The next phase of the political calendar begins at 11 a.m. Thursday, when Malloy and the legislative leaders hold a series of post-session press conferences to frame the session as a success or failure.