Breaking down a 300-page ‘implementer’ bill 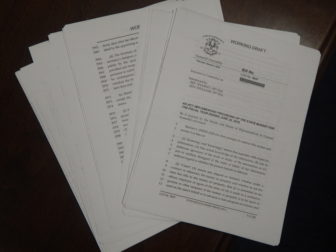 The end of every legislative session features a voluminous bill (or set of bills) known as the “implementer.” It contains the policy provisions needed to implement the state budget. And it’s the place where the party in power often stuffs other amendments — ranging from broad policy shifts that didn’t make it into other legislation to narrow changes meant to assist one group or town.

Unlike most other bills, implementers don’t go through legislative committees or public hearings. Some of the provisions in them may be ideas that made the rounds through the various committees. But others have received little or no public discussion until they appear in this bill, leading legislative staffers, lobbyists (and reporters) to scour the hundreds of pages to uncover the big and small changes being made.

The Democratic-controlled House of Representatives adopted the measure 91-56 in a vote largely along party lines just before 11:20 p.m. And while most Republicans opposed the package, the GOP did not use a final-night filibuster to kill it because the package included new restrictions on judicial pensions.

Still, House Minority Leader Lawrence F. Cafero, R-Norwalk, couldn’t resist taking a few jabs at the bill, noting that — despite its name — the budget implementer dealt with far more than just those policy changes essential to implement the next state budget.

“There are a lot of bad things,” he said. “I hope some day we get back to the tradition, to the original purpose of the budget implementer in its purest form.”

The Senate, where Democrats hold the majority, passed the bill 23-13, also along party lines, only about 15 minutes before the midnight deadline.

Sen. Joseph Markley, R-Southington, who objected to having to digest about 260 sections of the bill in a few minutes, said he wouldn’t scuttle the measure with a 15-minute filibuster. But he urged the chamber not to repeat Wednesday’s implementer exercise in 2015.

“Should I be back here next year,” he said, “and should the implementer be brought forth at quarter of 12, I make no promises.”

Here’s a look at what’s in this year’s 314-page implementer: