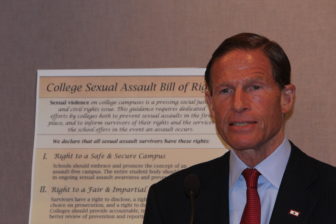 Sen. Richard Blumenthal speaks of the need for a "College Sexual Assault Bill of Rights" for students

After hearing from hundreds of Connecticut college students about their experiences of sexual violence, U.S. Sen. Richard Blumenthal wants an overhaul of federal law and enforcement procedures to ensure that college staff no longer turn away students seeking help.

“Survivors have reported that dismissive attitudes and statements from college staff discourage the filing of sexual assault complaints,” Blumenthal wrote in an 18-page report released Monday.

The Democratic senator’s proposed “College Sexual Assault Bill of Rights” comes amid increased public scrutiny of the way colleges handle sexual assaults. It follows complaints from students at 55 schools across the U.S. that their schools did not respond appropriately when they sought help after being assaulted or harassed.

The Connecticut legislature responded to the recent complaints against The University of Connecticut from seven current or former students by passing legislation that requires victims be offered free counseling and health services both on- and off-campus. The legislation Gov. Dannel P. Malloy signed into law on Monday also requires training for first responders.

“Our students should feel safe on our colleges and universities and if that is not the case, we need to ensure we are doing all we can to protect them and prevent future acts of violence,” Malloy said in a prepared statement. “I am proud that Connecticut is leading the nation in the implementation of strict legislation that will force change.”

“It goes only part way in providing rights that would be included in the bill of rights,” he told reporters Monday during a press conference at the state Capitol.

The Connecticut senator developed his legislation after holding roundtable discussions with students, parents, law enforcement and college officials on campuses throughout the state.

The changes Blumenthal is seeking would:

Blumenthal said he has been working with Sens. Claire McCaskill, D-Missouri and Kirsten Gillibrand, D-New York, to change federal law.

“We will be introducing legislation together,” he said. “I think you will find a bill of rights” in the bill.

In the meantime, he is urging local college officials to voluntarily implement the changes – something the president of the state’s largest public college system said Monday he intends to have his board vote on as early as June.

“This problem has become an epidemic [nationally],” said Gregory Gray, president of the four Connecticut State Universities and a dozen community colleges.