Connecticut’s unemployment rate cracked the 7 percent floor for the first time in five years in April thanks to the creation of 2,200 new jobs, the state Labor Department reported Thursday.

The jobless rate fell to 6.9 percent, down from 7 percent in March, its lowest mark since the 6.7 percent rate recorded in December 2008. 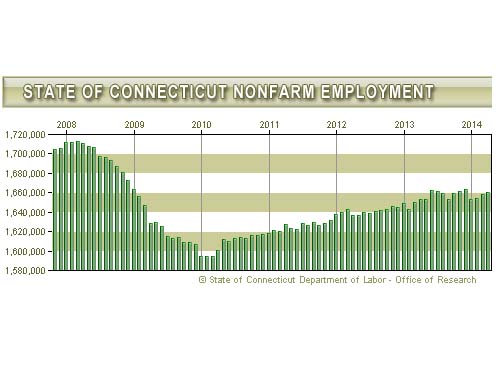 April’s numbers also represented the third consecutive month of job growth. Connecticut now has added 6,900 jobs over the past year. The unemployment rate stood at 7.8 percent 12 months ago.

“Both the establishment and household employment surveys are pointing to an improving labor market going forward for the state after extreme winter volatility,” said Andy Condon, director of the department’s Office of Research. “The expanding labor force, growing private sector work hours, and diminishing unemployment are encouraging signs for Connecticut’s economy. Even though the pace of Connecticut’s employment recovery is moderate, it seems to be on solid footing.”

But there still were some signs of weakness in the state’s job market.

However, Gioia said, it should be noted that Connecticut is still behind in terms of economic growth as Massachusetts, New York, and the U.S. overall already achieved full recovery of jobs lost in the recession.

Six of the major industry super-sectors tracked by the labor department recorded job gains in April, topped by trade, transportation and utilities, which added 800 positions. Other super-sectors that experienced growth were: leisure and hospitality; education and health services; financial activities; construction and mining; and government.

Among the other four super-sectors, professional and business services saw the biggest decline, down 600 jobs. Other super-sectors to lose ground included manufacturing, information, and other services.

With Connecticut now 50 months into its recovery from the last recession, the state has recovered just over 70,000 of the 121,000 jobs it lost in that economic downturn.

Employment grew in the Bridgeport-Stamford-Norwalk, New Haven and Norwich-New London labor markets. The Danbury, Hartford and Waterbury markets all were lower in April.