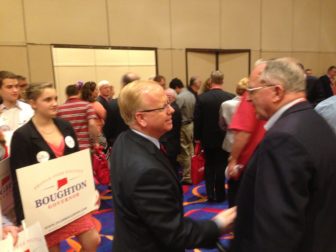 Uncasville — There was the distant possibility of a “dream ticket,” one that might avoid a primary. One candidate for lieutenant governor apologized for suggesting that a rival had made a racially insensitive remark. And a new alliance for governor and lieutenant governor was in the works.

Welcome to the 2014 Republican State Convention, where no votes for governor are being cast until Saturday, but there was plenty of action Friday as candidates, their operatives and party officials explored whether it still was possible to engineer a ticket in an era of free-agent politics.

John P. McKinney, one of the five candidates seeking the nomination for governor, announced at 11 p.m. he would hold a press conference at 9 a.m. Saturday to name a running mate: former U.S. Comptroller General David Walker, one of the three candidates who have been campaigning for lieutenant governor.

According to sources with knowledge of the talks, McKinney and Walker agreed early Friday to run as a team – unless there was a renewal of talks with Tom Foley, the GOP front runner, to ask the convention to accept a Foley-McKinney ticket that might be strong enough to avoid a primary.

But the negotiations to create a McKinney-Walker ticket were complicated by a wild card: A reported claim by Rep. Penny Bacchiochi of Stafford, who has been campaigning since last year for lieutenant governor, that Walker had raised Bacchiochi’s biracial marriage as an issue in talks with delegates.

“I hope people will see Penny Bacchiochi’s assertion for what it is —  a complete untruth by a desperate candidate on the eve of the GOP Convention,” Walker said in a statement. “This outrageous, unethical and unfounded personal attack has no basis in fact or reality. I am shocked and saddened as to why this particular line of attack was chosen, but she has essentially called me a racist.”

Bacchiochi, who is white, said WFSB incorrectly reported that she accused Walker of making an issue of the race of her husband, who is black. WFSB stands by its story.

“I didn’t say David Walker specifically said those things about me,” she said. As to how she knows delegates are talking about the race of her husband, she said, “Those are rumors and whispers and things people are telling me back channel.”

Bacchiochi and Walker issued a joint statement after 9 p.m. in which Bacchiochi apologized, Walker accepted and a relieved Jerry Labriola Jr., the GOP state chairman, declared the matter closed.

“Neither Dave Walker nor his campaign made any insensitive remarks toward me or my family,” Bacchiochi said. “I apologize to Dave and his family. Dave and I have met and agreed to put this matter behind us, and to focus on the critical work of the convention.”

With a cloud removed from Walker’s candidacy, McKinney publicly confirmed the ticket 90 minutes later, scheduling their first joint press conference for Saturday, immediately before the convention resumes. The alliance presumably gives each more delegates, strengthening their hold on the right to primary. It also allows them to pool their qualifying funds for public financing.

In an interview, Bacchiochi acknowledged complaining of “rumors and whispers” to delegates about her biracial marriage — first on WTIC AM and again on WFSB. TV. She said she faulted Walker for criticizing her paid lobbying in other states for legalizing medical marijuana, but did not accuse him of racial politics.

The Mirror first reported in 2010 that Bacchiochi, a long-time advocate of legalizing marijuana medical purposes, had listed a national advocacy group, the Marijuana Policy Project, as a source of income. According to the group’s public tax returns, she was paid $113,000 over three years to lobby legislators in other states.

Labriola said earlier in the day he did not find the complaint about Walker to be credible.

“I know David Walker,” Labriola said. “It is inconceivable.”

The beneficiary seemed to be Heather Bond Somers, the third candidate for lieutenant governor. She has an alliance with Danbury Mayor Mark Boughton, one of the other gubernatorial candidates with strong hopes of qualifying for a primary at the convention.

She issued a statement late Friday morning trying to show, in the words of one supporter, that her campaign represented “the adults in the room.”

“The recent mudslinging that has taken place between my fellow Lt. Governor candidates is truly disappointing,” she said in the statement. “As a party we should be working together and focusing on the real issues and who is the best candidate to move our state back into a place where people want to work, live and retire.  Our party needs to stay focused on what is most important for our state and this nonsense has only led to confusion and distraction.”

The difficulties in shaping a ticket have become stark this year.

If Foley has the first-ballot votes to win, as he claims, he has no power to designate his running mate, unless Bacchiochi, Walker and Somers agree not to force a primary. Any candidate who wins 15 percent of any ballot at the convention automatically qualifies for a primary in August.

McKinney, for example, could have agreed to be Foley’s running mate without any guarantee of making it to the November ballot without a primary fight. Bacchiochi has promised to run a primary, regardless of any efforts at shaping a ticket at the convention.

The result was a shotgun marriage arranged by GOP primary voters: a Foley-Boughton ticket that never quite jelled.

Another complicating factor in ticket shaping is public financing. All three candidates for lieutenant governor and four of the five running for governor have been raising qualifying contributions for public financing.

If party leaders tried to convince Bacchiochi, Somers or Walker to accept another spot on the under ticket, they would have to return their qualifying contributions and start over, a significant disincentive.

Foley said Friday night he had no deal for a running mate, as of “now.” “Conventions are like basketball games,” he said. “It’s the last 20 seconds that matter.”

In the delegate voting for governor, Shelton Mayor Mark Lauretti is expected to fall short of the 15-percent threshold to automatically qualify for a primary, but he has told supporters will petition his way onto the primary ballot.

The fifth candidate for governor, Joe Visconti of West Hartford, also said he will continue by petitioning his way onto the primary ballot. To reinforce the point, Visconti showed delegates signatures he already has gathered.

Peter Lumaj, who ran for U.S. Senate in 2012, was endorsed for secretary of the state Friday night. The rest of the statewide ticket will be endorsed Saturday.

There was a late entrant in the race for attorney general: Jerry Farrell Jr. Until Friday, Kie Westby was the only candidate.

“I think it’s a little bit late,” Westby said. “He has a right to do it. That’s what our system is about, competition.”