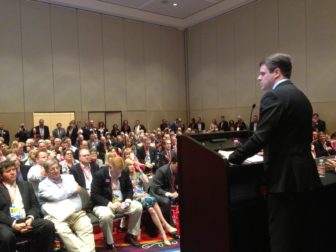 Uncasville — Like a political assembly line, the Republican Party simultaneously churned out endorsed candidates for Congress in all five districts Friday, overwhelmingly backing two repeat candidates, Dan Debicella in the 4th and Mark Greenberg in the 5th.

The 4th District of Fairfield County and the sprawling 5th of Western Connecticut are considered to be the GOP’s two best chances to win a congressional race here for the first time since 2006. In both districts, the party is up against well-funded and well-prepared incumbents.

Debicella, 39, of a Shelton, a former two-term state senator who lost to U.S. Rep. Jim Himes, D-4th, in 2010, accepted the endorsement with a sharp attack on the state of the U.S. economy, the administration of Barack Obama and Himes’ role as a fundraiser for congressional Democrats.

“Jim is so focused on raising money for his party that he is willing to trade legislation for it,” Debicella said. He won easily over two other candidates and appears to face no primary.

With the outcomes not in doubt, the congressional conventions were were a time-filler to the main event: the efforts by the top three candidates for governor, Tom Foley, John McKinney and Mark Boughton, to reinforce commitments from delegates.

In the lieutenant governor’s race, meanwhile, Rep. Penny Bacchiochi, R-Stafford, distanced herself from a story that exploded the previous day in which she was described as accusing a rival, David Walker, of making her biracial family an issue.

On Friday, Bacchiochi said she only had complained about Walker criticizing her lobbying on behalf of legalized medical marijuana. She said she had heard “rumors” about the race of her husband becoming an issue, but she never accused Walker.

Bacchiochi is white. Her husband is black. The story appeared to inflict more damage on Bacchiochi than Walker. As The Mirror reported earlier Friday, Walker was set to named by McKinney as his preferred running mate. 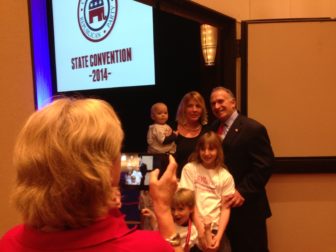 Mark Greenberg posing with his family as the votes were counted.

In the 5th, the most competitive of the five House districts, Greenberg was the near-consensus pick in a two-man race with Sal Lilienthal, the owner of a bicycle touring company. Greenberg lost a four-way primary for the nomination in 2012 and a three-way race in 2010.

“Well, persistence does pay off,” said Jerry Labriola Jr., the state chairman. “The third time is the charm.”

In accepting, Greenberg thanked his wife, his five children and his opponent and promised to work to restore the U.S. economy. Greenberg, 60, of Litchfield, who owns a real-estate business, has largely self-funded his campaigns.

He will face U.S. Rep. Elizabeth Esty, a first-term Democrat. The 5th is the state’s most competitive district.