Modest pay, long hours for most who work for CT Congressional delegation 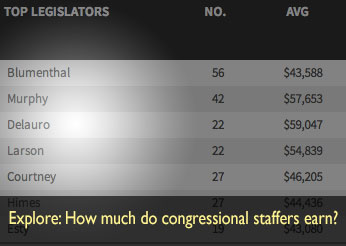 Washington –  The hours are long and the working conditions can be grim, and for most there’s little pay in working for members of Connecticut’s congressional delegation.

Connecticut lawmakers differ on who they hire to run their offices and how much they pay their staffers. But an analysis by the Connecticut Mirror shows that, except for the top staffers, those who work for Connecticut members of Congress are paid less than their counterparts in the private sector or the civil service.

According to the Connecticut Mirror study, the average salary for a legislative aide working for a member of the delegation last year was  about $41,000. Legislative aides serve as liaisons to constituents and interest groups and monitor legislation, track issues, attend meetings and hearings, and perform other information-gathering duties.

Schedulers earned an average of  about $42,000. They serve as air traffic controllers in lawmakers’ offices, accepting and rejecting invitations and making sure a lawmaker gets where he or she has to go on time.

Communication directors, who protect the lawmaker from bad press, publicize their accomplishments and write speeches and statements for their bosses, earned an average of  about $60,000. (The average salaries used in the CTMirror study were based on employees who worked for a full year.)

“You work in an office where everybody is on top of each other, the hours are unpredictable and there’s no job security,” said Lee Drutman, a senior fellow with the Sunlight Foundation. “And you don’t get any credit for what you do. You have to pretend the lawmaker does it all.”

Drutman also said that people with the same skills and education who are working for private companies – or even in the civil service –are likely to have substantially higher salaries, as well as much more job security and better hours.

Unlike federal employees, congressional staffers are not protected by a union, although they do have subsidized health insurance and vacation pay. Many have not had a raise in years — even to cover cost of living increases.

Things are not getting better for those working on Capitol Hill.

In two reports released in recent years, one on the House and the other on the Senate, the Sunlight Foundation found that as the U.S. population has increased, and as members of Congress represent more people, the number of congressional staffers has decreased.

“Over the past thirty years, the Senate weakened its institutional knowledge base and diminished its capacity to understand current events through a dramatic reduction of one of its most valuable resources: experienced staff,” the Sunlight Foundation report on the Senate said.

The foundation’s report on the House found a decrease in the number of staff and that “average salaries for most House staff have not increased in two decades, and may have decreased for many.”

The study concluded nearly 12,500 federally registered lobbyists and countless others who provide information and exert influence in the halls of Congress are picking up the slack.

“Put a different way, $2.6 billion was spent on lobbying in Washington in 2010, versus $1.37 billion for the House of Representatives in FY 2010. Have we privatized Congress?” the study asked.

Capitol Hill staffers are not likely to see an increase in pay soon because of pressures to cut the federal budget.

Drutman said the low pay and tough working conditions lead to “tremendous turnover” in  lawmakers’ staff and to the spinning of the “revolving door” between Capitol Hill and a lobbying firms.

Many lower-level staffers use their Capitol Hill credentials to help them get good jobs in private industry.

Members of the House and Senate earn the same salary — $174,000 a year — unless they are in a leadership position. Lawmakers have not had a pay hike for three years and are unlikely to vote themselves a raise this year.

Lawmakers are given a set amount of money each year to run their offices. In 2013, House members received  $256,574 to cover all of their office expenditures. They were also given free postage, a mileage rate to make 32 round trips to their districts and a staffing allowance of $944,671 to pay for salaries.

In the House, only Rep. Elizabeth Esty, D-5th District, stayed within the staffing allowance. The rest of the members of Connecticut’s House delegation exceeded it with Rep. Rosa DeLauro, D-3rd District,  having the highest payroll in the House delegation, nearly $1.2 million.

DeLauro is the longest-serving member of Connecticut’s congressional delegation and, as a senior member of the Appropriations Committee, is able to use her committee budget to augment her payroll. DeLauro’s staffers, many of whom have worked for the lawmaker for many years, also had the highest average salary — about $59,000.

But Sen. Richard Blumenthal, D-Conn., who hired 56 staffers last year, spent much more on staff than DeLauro. Blumenthal had a $2.5 million payroll.

Senate office budgets are based on the population of a lawmaker’s state and a few other factors. Blumenthal’s office budget last year was about $5.1 million. Sen. Chris Murphy, D-Conn., had a smaller office budget, about $4.4 million, but he was still a member of the House of Representatives for part of that year, which ran from Oct. 1, 2012 to Sept. 30, 2013.

The highest paid staffer working for the Connecticut congressional delegation was Laurie Rubiner, Blumenthal’s chief of staff. She was paid $169,457.

An aide to Courtney said Gross earned the high salary because he has worked for the lawmaker for seven and a half years.

Blumenthal said he pays his certain staffers high salaries “because they are very good and produce excellent results.”

He also said he has a large staff to take care of constituent problems – not write memos or prepare briefings.

“I have said from day one, my job is to work for the people of Connecticut,” Blumenthal said. “That’s why I have a lot of staff.”