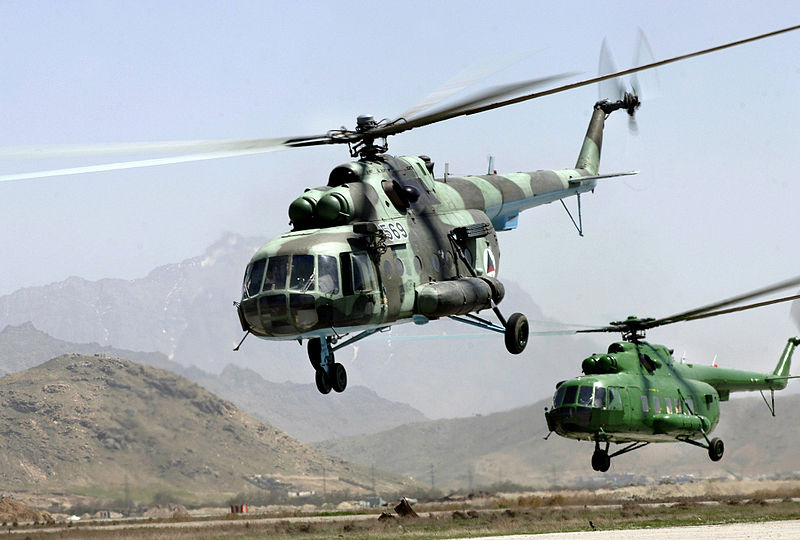 Washington – Ignored by the Pentagon and State Department, Connecticut lawmakers hope increasing congressional anger towards Moscow will finally force the end of  U.S. purchases of helicopters made by Russian state arms dealer Rosoboronexport destined for the Afghan armed forces.

The DoD has already spent $546.4 million on 33 helicopters and plans to spend $553.8 more to million to purchase 30 Mi-17 transport helicopters from Rosoboronexport for  Afghanistan’s air force.

But Russian moves on Crimea and its role in the Edward Snowden affair has prompted an increasing number of lawmakers – some of whom represent companies like Sikorsky that hope to take over the Rosoboronexport contract – to question the wisdom of the DOD’s relationship with the Russian arms dealer.

“There aren’t very many people in Congress who could support this anymore, it’s just awful,” said Loren Thompson, a defense analyst with the Lexington Institute.

A slew of legislation that would end the U.S. purchase of helicopters from Rosoboronexport has been recently introduced—with two amendments to a bill that authorizes defense spending up for  consideration in the House on Wednesday.

Whether those amendments survive, Thompson said there’s a good chance Congress will finally force the Pentagon to scrap its contracts with the Russian firm.

“There is just so much anger about Crimea and Snowden,” he said.

Rep. Rosa DeLauro, a Democrat whose 3rd congressional district is home to Sikorsky, has for years tried to prevent the Pentagon from purchasing helicopters from Rosoboronexport. DeLauro and other Connecticut lawmakers argued Russia’s sale of arms to Syria and Iraq were good reasons to end the contract.

Bowing to congressional and budgetary pressures, the Pentagon announced in November, it would put off a new contract with the Russian firm. Then it changed its mind, notifying Congress in early April it planned to move forward with the purchase of 30 new ‘copters.

The closest DeLauro got to ending the relationship was legislation in he 2013 defense spending bill that prohibited the funding of the Rosoboronexport contract. The Pentagon did an end run around DeLauro’s legislation, however, by using money appropriated in previous years to continue to buy the ‘copters.

“The Defense Department blatantly ignored the intent of Congress when it signed a contract to purchase 30 more Mi-17s,” an angry DeLauro said.

This week, DeLauro hopes to win approval of two amendments to the defense authorization bill the Pentagon would  find hard to ignore.

One would prohibit the DOD from entering into a contract with Rosoboronexport “unless the Secretary of Defense, in consultation with the Secretary of State and Director of National Intelligence, certifies that the firm ceased transferring weapons to Syria, Russia pulled out of Crimea, Russian forces have withdrawn from the eastern boarder of Ukraine, and that Russia is not otherwise actively destabilizing Ukraine.”

The second amendment is even more straightforward. It would “prohibit contracts or subcontracts with Russia’s state-arms dealer Rosoboronexport and requires the termination of any current contract with the firm.” The amendment would also bar the Pentagon from entering contracts “with any foreign company that cooperates with Rosoboronexport to design, manufacture, or sell military equipment.”

There’s a similar tactic in play in the Senate that builds on existing sanctions on Russia.

A bipartisan group of lawmakers introduced “The Russian Weapons Embargo Act of 2014,” last year that would forbid the direct or indirect use of U.S. tax dollars to enter contracts or agreements with the company and end all existing contracts.

The bill is sponsored by Sens. Dan Coats, R-Ind., John Cornyn, R-Texas; and Richard Blumenthal, D-Conn. It would forbid the direct or indirect use of U.S. tax dollars to enter into contracts or agreements with the company and end all existing contracts.

“Given Russia’s hostile actions in Ukraine, business as usual is unacceptable,” Coats said in a statement.

The bill’s sponsor are selling their legislation as a legitimate response to Russia’s aggression, but like Blumenthal, they have parochial interests too.

Texas is home to Bell helicopters, which is likely to compete against Sikorsky for the Afghan helicopter contract if Rosoboronexport is out of the picture. And Raytheon Analysis and Test Laboratory, which helps make sensors and weaponry for helicopters,  located in Indiana.

Thompson said Bell has a chance to beat out Sikorsky if the Rosonboronexport contracts are terminated.

“Bell helicopters are a relatively simple and sturdy alternative to the (Mi-17 transport) helicopters,” he said.

Thompson said the Pentagon chose Rosoboronexport to provide Afghanistan with helicopters because the Afghans are familiar with the Mi-17 and it’s relatively simple to fly, especially over the country’s mountainous and rugged terrain.

The Russian ‘copters are likely to be cheaper than anything Sikorsky or Bell could offer, and it would be easier for Rosoboronexport to supply and maintain the helicopters than a U.S. company that is thousands of miles away.

“These helicopters have been operating a long time in Afghanistan,” said Steve Ellis, vice president of Taxpayers for Common Sense. “They know how to fly them and they know how to maintain them.”

Having failed to persuade the Pentagon to stop buying Rosoboronexport helicopters, Blumenthal and Sen. Chris Murphy, D-Conn., signed a letter to Secretary of State John Kerry that urged him “to strongly encourage our NATO allies and OSCE (Organization for Security and Co-operation in Europe) participating states” to end any military contracts with Russian companies.

The Connecticut senators, joined by Cornyn, Coats and others, have also written President Obama asking him to include Rosoboronexport on the list of Russian companies under sanction.

Kerry and Obama have not heeded the requests.

The George W. Bush administration had slapped sanctions on Rosonboronexport in 2006 amid allegations that the company was helping Iran with its nuclear program. Obama lifted the sanctions in 2010 as part of an effort to reach out to Moscow.