Washington – Connecticut colleges have been increasingly benefiting from money from the Pentagon over the last few years, winning millions in contracts from the U.S. armed forces to conduct research on a wide range of products used in national defense — from sensors that track the health of soldiers to instruments that detect matter in outer space.

An analysis by The Connecticut Mirror of Department of Defense contracts since 2000 shows the academic-military complex in Connecticut expanded sharply in 2010 and peaked in 2012, when state colleges, led by Yale University, won $5.6 million in contracts from the military.

The relationship weakened last year, when the Pentagon was subjected to across- the-board budget cuts known as sequestration. Defense contracts to Connecticut schools in 2013 dropped to a little more than $4 million.

The Obama administration’s decision to trim that money may make competition for military research money more heated this year.

Yale has been, perhaps unsurprisingly, the largest recipient of Pentagon dollars, about $18.6 million since 2000, followed by the University of Connecticut which received about $12.6 million.

The University of New Haven, for instance, received DoD contracts for advertising and “multicultural, multilingual data aggregation with criminal extremists and terrorist attributes.”

In Connecticut’s largest schools, DoD money flowed to many disciplines, including math, biology, physics, computer sciences and even psychology departments.

UConn, meanwhile, studied pathogens for the U.S. military, developed sensors that track the health of soldiers and created new polymers for devices that hold electric charges. The UConn math department received $777,000 to conduct several projects for the military, including work on a formula that helps estimate populations. 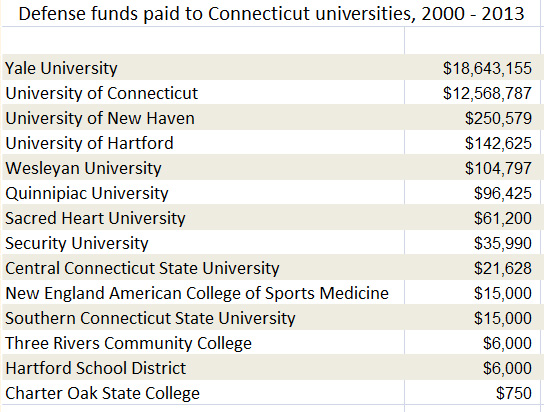 Connecticut’s schools are not the only ones receiving Pentagon money for research that helps fight wars.

In 2007, University of Oregon professor Brian Bogart published a paper called “Unwarranted Influence” that showed the extent of the ties between U.S. colleges and the armed forces.

“When President Dwight Eisenhower gave his prophetic January 1961 farewell speech warning of the growing unwarranted influence on universities and governments by the defense industry, few universities had Department of Defense Contracts. As of December, 2006, 1107 universities had DoD contracts,” the report said.

Bogart’s study listed nine Connecticut colleges that had DoD contracts that year, compared to 10 in New Jersey, 47 in New York and 19 in Massachusetts.

While Bogart warned of an “unwarranted influence” by the military on academia, the Association of American Universities supports the relationship.

Association spokesman Barry Toiv said the Pentagon is helping produce “the next generation of scientists” as it funds research into products and studies that help the military – and sometimes civilians, too.

Toiv said ties between academia and the armed forces were first forged during World War II and because it was successful, “the decision was made to sustain this partnership.”

But he warned “that [relationship] is greatly in danger now” from  Pentagon budget cuts.

The association has allies on Capitol Hill, however.

On Wednesday, 18 senators — many of them members of the Senate Armed Services Committee — sent the Senate Appropriations Committee a letter requesting it reverse the Obama administration’s  $150 million cut in DoD “basic research”–  the name for most of the military research  conducted at U.S. colleges.

“These programs lay the groundwork for applied research and technology development programs that lead to higher performance, deployable defense system,” the letter said. “Further, the defense basic research program is an investment in the universities, small businesses, and government laboratories that serve as the engines of innovation for the DoD.”