Gov. Dannel P. Malloy said Friday he has vetoed a bill at the heart of an unusual end-of-session deal: A measure that would have lifted the statutory ban on fishing in Connecticut waters for a species now under consideration for threatened status, the glass eel.

The bill was passed on the last night of the 2014 session of the General Assembly as a gesture by majority Democrats to coax Republicans into ending a filibuster on a separate measuring imposing a three-year moratorium on the disposal in Connecticut of wastes generated by fracking, a method of natural gas extraction.

“I believe we must be good stewards of the environment,” Malloy told reporters at the monthly press conference following the state Bond Commission meeting.

By margins of 92 to 52 in the House and 36 to 0 in the Senate, legislators voted to lift the statutory ban on eels, effective Jan. 1, 2016, but the establishment of a fishery was contingent on approval by the Atlantic States Marine Fisheries Commission. The interstate agency regulates the taking of glass eels, which are juvenile, translucent American eels that can command prices of $2,000 a pound.

The U.S. Fish and Wildlife Service and the National Marine Fisheries Service declined a petition in 2007 to place the American eel under the protection of the Endangered Species Act. It is now conducting a more extensive study after evidence of declining eel populations.

“Accordingly, any bill which takes a step towards allowing these creatures to be taken from the waters of our state would be premature and would send mixed messages,” Malloy said. 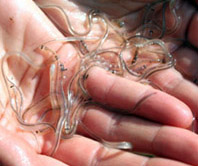 Rep. Craig Miner, R-Litchfield, the sponsor of the eel bill, said the veto is a blow to Connecticut fisherman and a potential new commercial fishery for a species that can command prices of ranging from $800 to $2,500 a pound.

“I’d say to you it’s a little surprising,” Miner said of the veto.

Lifting the ban simply would have allowed fishermen in Connecticut to seek a share of any quota for eels established by the Marine Fisheries Commission, Miner said.

The eels spawn in the Atlantic, but live most of their lives in freshwater rivers. The biggest threat to the species is suitable river habitat, not the fishing of juvenile eels, Miner said.

Miner said the state Department of Agriculture has recognized the potential commercial value of glass eels with a pilot program to raise the fish for harvesting in Middletown.

“It’s not the first time there’s been a mixed message out of this administration,” Miner said.

Leah Lopez Schmalz, director of legal and legislative affairs for Save the Sound, praised the governor.

“We’re thrilled that the governor has vetoed this bill, which would have put already-threatened American eel at greater risk. Glass eels are a crucial part of the marine food web, not just in the Sound but in rivers throughout the Northeast and in the Atlantic,” she said. “Save the Sound and the state of Connecticut have devoted significant funds to restoring safe migratory access for these eels in rivers across the state, and we’re pleased they’ll continue to be protected from fishing so they can return to the abundance they once enjoyed.”