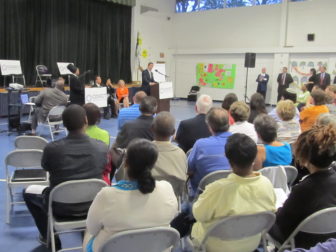 Milford – Once again, Gov. Dannel P. Malloy has put himself in potential conflict with Connecticut’s firearms industry, this time by signing onto a nascent effort by an interfaith group to force manufacturers into a conversation about their role and responsibility in stopping gun violence.

A year after seeking and signing gun control measures in response to the Sandy Hook school massacre, Malloy has committed to a campaign by a new player in the gun debate: CONECT, the social-justice coalition best-known for defending the rights of Latinos and undocumented immigrants.

“It is time to have a dialogue with the firearms industry itself,” Malloy told 100 members of CONECT, Congregations Organized for a New Connecticut. “We should admit, very candidly, that this has got to be very scary for firearms producers.”

The coalition wants the firearms industry to produce safer weapons, using technology that would leave a gun inoperable to all but its owner, and to crack down on dealers deemed negligent in stopping straw purchasers.

Malloy noted that any firearms manufacturer who engages in such talks could be deemed by customers insufficiently supportive of the Second Amendment. They could be blacklisted, as were a Maryland store and California dealer that sought to sell “personalized guns” manufactured by Armatix, a German company.

“So we need to stand up and force this dialogue to happen,” Malloy said.

The coalition, which estimates that law enforcement buys 15 percent of all firearms and ammunition in the U.S. and the military buys 25 percent, wants Malloy and other public officials to use their buying power to pressure the industry.

“This is the first step in holding gun manufacturers accountable,” said Pastor Bernadette Hickman-Maynard of Bethel AME in Bridgeport.

Neither Malloy nor any of the clergy involved in CONECT predicted that any public jurisdiction was close to threatening a boycott of gunmakers if they do not cooperate.

“It is a strategy that is evolving,” said the Rev. James Manship, the pastor of St. Rose of Lima Catholic Church in New Haven.

The National Shooting Sports Foundation, an industry trade group based in Newtown, not far from where 26 children and staff were killed at Sandy Hook Elementary, said if Malloy was truly interested in a dialogue, he would have contacted them directly and not made a speech to CONECT in Milford.

“We rather suspect that the Governor sees a political advantage in publicly sparring with the firearms industry, rather than really bringing us into a conversation,” the NSSF said in an emailed statement.

Malloy is a first-term Democrat seeking re-election this fall.

The group says it sent a letter on April 15 seeking a meeting with Malloy’s new public safety commissioner, Dora B. Schriro, to discuss the state’s new gun law and never got a response. Schriro was among the public officials to address CONECT in the gymnasium of St. Gabriel School in Milford.

John Larkin, a lobbyist for NSSF, was in the audience Monday night. He declined to comment, but the foundation says it already runs programs to promote firearms safety:

“The implication that firearms manufacturers and retailers do not actively engage in responsible practices to promote public safety is untrue and unfortunate,” the foundation said.

CONECT has joined a national coalition led by Metro IAF, which bills itself as the nation’s largest multi-faith community organizations, promoting a campaign called, “Do not stand idly by.”

It has asked several dozen public officials and law enforcement officers in eight states to form a “Gun Buyers’ Research Group” that will seek information from gunmakers about distribution practices and safety technology.

Malloy appears to be the highest-ranking public official to lend his name to the campaign.

“The governor’s appearance tonight was a shot in the arm. We didn’t expect him to be here,” Manship said. “This was something that happened late last week, so it was great that he was here.”

CONECT consists of of 27 congregations with 50,000 members, Manship said.

Malloy said the movement was in its “infancy.”