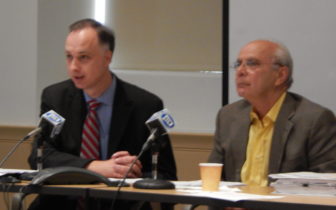 A new outreach program designed to attract new students to Connecticut’s merged public college system also could determine whether the new $1.1 billion budget remains in balance over the next year.

But the finance panel for the Board of Regents for Higher Education, which unanimously recommended the budget Tuesday, also learned that more than 2,000 students – two-thirds of the enrollment target for “Go Back to Get Ahead” – inquired about the program within the first week of its launch.

The new budget for the 2014-15 fiscal year, which heads to the full board for final consideration on June 18, also raises tuition and fees, on average, by 2 percent. The system budget funds the four state universities, 12 community colleges, Charter Oak State College and the regents’ central office.

Members of the board’s Finance & Infrastructure Committee said that modest hike, given recent fiscal challenges, is an important accomplishment in controlling costs.

“Our ability to break even in [fiscal year] ’15 does hinge on our ability to attract those students,” Erika Steiner, the system’s chief financial officer, told the finance committee.

Steiner was referring to a “conservative estimate” that about 3,000 new students will take advantage of the “Go Back” program in the new budget year and receive a limited number of free classes.

If so, that would mean more than $7.6 million in additional tuition and fee receipts. And a system budget that had to dip into reserves to finish in balance this fiscal year, could finish nearly $5.7 million in the black in 2014-15.

“Hopefully that is wildly successful,” said regent Richard J. Balducci, who serves on the finance committee.

The “Go Back” initiative is one of two key factors that will enable the board to boost tuition and fees 2 percent, while covering contractually mandated salary and fringe benefit cost hikes of more than 5 percent.

Besides revenues tied to the “Go Back” program, the new system plan also relies on $24 million in supplemental operating funds included in the state budget by Gov. Dannel P. Malloy and the legislature.

“That makes a gigantic difference” finance committee chairman Matt Fleury said, adding it means for a small tuition increase “we’re offering terrific services to the students of the state of Connecticut.”

“The governor and the legislature have been very supportive of us and I think that’s critical,” Balducci said.

Still, Fleury cautioned that officials need to keep a close watch on system finances in the new budget, noting that about $3 million in community college reserves must be tapped to avoid closing the books on 2013-14 in the red later this month.

The system has been forced to drain reserves too often in recent years as state officials have limited operating funds for public colleges and universities in a struggle to balance the state budget.

The latest transfer leaves about $11.3 million in reserves for the community colleges, one of the lowest levels in recent history, Fleury said, adding “this is not a sustainable outlook.”

An effort in Connecticut to end the economic border wars

Can the states agree to mutually disarm when it comes to the billions of dollars in economic incentives that are spent annually coaxing companies to move, expand or sometimes merely stay put?

'Right to Housing' is a popular concept in Europe, but it's yet to gain traction in the U.S.