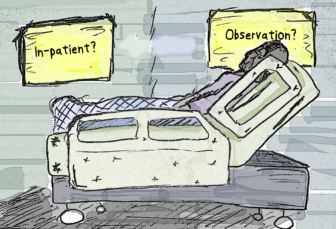 Patients, take note: Starting Oct. 1, those who spend more than 24 hours in the hospital could receive notice that they’ve been placed on something known as “observation status.” It’s a technical term, but one that could mean the difference between having their recovery paid for — or ending up with a hefty bill.

What does the new law do?

The law requires hospitals to let patients know — verbally and in writing — if they have been placed on “observation status.”

But the way a hospital classifies a patient can make a big difference when it comes to payment. Some health care coverage, including Medicare, treat care provided to inpatients differently than care provided to people who are not considered to have been admitted to a hospital — potentially leaving patients on observation status with higher out-of-pocket costs for medication and other care.

The new Connecticut law requires hospitals to notify patients who are placed on observation status, as well as to let them know that they are not admitted to the hospital, that the status could affect their Medicare, Medicaid or private insurance coverage for hospital services and medications, as well as care received after the hospital stay at home or in a nursing home. The notice must also recommend that patients get in touch with their health insurer or the state Office of the Healthcare Advocate to learn more about the implications of being on observation status.

The notice must be signed by the patient or his or her legal guardian, conservator or authorized representative.

What does the law NOT do?

Patients who are hospitalized.

Issues of patient costs related to observation status have largely been a problem for Medicare patients, but Judith Stein, executive director of the Mansfield-based Center for Medicare Advocacy, said it’s been increasingly an issue for privately insured patients too.

Because of the way Medicare treats patients on observation status, many patients have ended up with bills of thousands of dollars for their recovery in nursing homes, unaware that they were not considered inpatients or would have to pay for their rehabilitation. In other cases, according to advocates, seniors have had to choose between forgoing recommended recovery at a nursing home or paying thousands of dollars for it out of pocket.

The Center for Medicare Advocacy has been pushing for years for changes in the way the observation status is handled. So have some lawmakers, including U.S. Rep. Joe Courtney, D-2nd District, who has proposed changing the law so Medicare would count the days patients are hospitalized on observation status as inpatient days, allowing them to receive coverage for nursing home care.

Observation status is not uncommon: In 2012, Medicare beneficiaries had more than 600,000 hospital stays that lasted for three or more nights but didn’t qualify for coverage of nursing home care, according to the Inspector General for the U.S. Department of Health and Human Services.

So why do hospitals put patients on observation status in the first place?

Some advocates believe it’s a reaction to stepped up auditing of hospitals meant to crack down on waste and control costs. The government has hired contractors to identify if hospitals are admitting patients who don’t need it, which some say has made hospitals more cautious about admitting patients. Putting someone on observation status allows the hospital to potentially lessen the scrutiny on patient admissions, some say.

A lobbyist for the Connecticut Hospital Association testified earlier this year that hospitals might place patients on observation status if they’re not medically safe to be sent home but don’t meet the technical billing guidelines and insurance requirements for being considered an inpatient.

Michele Sharp, a spokeswoman for the hospital association, said Monday that hospitals have been communicating information to patients about observation status, and do not have concerns about implementing the new law, which she said addressed a complicated and confusing area of federal law.

What should a patient who gets the notice do?

Stein, of the Center for Medicare Advocacy, said patients can try to convince the hospital to change their status if appropriate. Her organization will help Connecticut residents do this at no charge. The center also provides self-help packets for people in Medicare who are having issues with observation status

Stein advised people who are going to be discharged from the hospital to a nursing home to get in touch with her organization before being discharged.

The bill passed the House and Senate unanimously and was signed into law by the governor last week.