Connecticut legislators in 13th year without a raise 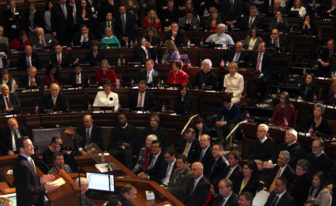 While nearly a fifth of the nation’s state legislatures increased their salaries last year, Connecticut’s General Assembly members are in the midst of their 13th year without a pay raise.

And given the Nutmeg State’s ongoing budget challenges, legislative leaders from both parties said this week that a raise isn’t likely any time soon – even though it’s becoming harder to find people willing to serve.

“It would be contingent upon a general improvement in the economy to even make the discussion foreseeable,” Senate Majority Leader Martin M. Looney, D-New Haven, said.

The problem for legislators, though, is that state government has been struggling fiscally to some degree for a long stretch.

When the 2011 legislative session began, Gov. Dannel P. Malloy and lawmakers had to close one of the largest projected deficits in state budgeting history, an 18 percent gap in the 2011-12 fiscal year. That was done with more than $1.5 billion in tax increases – also not the best environment for legislators to give themselves a raise.

And though state finances have grown more stable in relative terms, Malloy and the legislature still have used borrowing and other controversial measures to push hundreds of millions of dollars in expenses – plus interest – into the next term.

Nonpartisan analysts project a nearly $1.4 billion deficit, equal to 7 percent of annual operating costs, must be filled in the first new budget after the November elections.

According to a new report from the Pew Charitable Trust’s Stateline News Service, state legislative pay varies greatly nationwide, depending in part upon whether the legislature is considered a full- or part-time occupation.

California lawmakers sit at the top, earning $90,526 annually. At the bottom end, New Hampshire gives its legislators a $200 stipend for a two-year term while New Mexico lawmakers earn nothing.

The state also provides $5,500 yearly to senators and $4,500 to representatives for expenses they don’t have to document.

Connecticut also provides annual stipends ranging from a few hundred to several thousand dollars to legislators with leadership assignments. Nearly the entire Senate, 33 out of 36 members, are leaders, while 65 out of 151 representatives also hold some rank.

Still, after ordering eight pay increases between 1983 and 2001, the state legislature hasn’t even considered another one since then.

Meanwhile, many legislators from both parties have said that while the General Assembly meets on a part-time basis, their average work week is not that of a part-time position.

And while the average work week extends far beyond 40 hours during the session, it doesn’t end with adjournment, legislators argued. Committees and study panels still meet, although with less frequency, after the session ends. And responding to constituents’ concerns is a year-round responsibility.

“We work pretty much full-time and we get paid part-time,” Looney said, and given the inflation and 13-year run without a raise, “there’s been a pretty substantial erosion in legislative compensation.”

Looney, Fasano and others said the effect of this run has been to weaken the legislature’s overall diversity.

Fasano said legislators should accept that their compensation, to some extent, won’t fully reflect the long hours they work.

“You accept that when you go into it,” he said. “That’s the price that you pay.”

But Fasano also noted that the legislature is becoming increasingly comprised by the retired, lawyers and employees of various advocacy groups.

Rep. Themis Klarides, R-Derby, deputy House minority leader, said “there’s so many [other] people who want to run and would be good for the state.”

Klarides agreed with Fasano that “I don’t know how anybody can justify raising anybody’s salary now,” given the projected budget deficit. “We have to get our financial house in order.”

One solution to consider once that has been accomplished, though, is a system that periodically increases legislators’ pay to correspond with inflation, Klarides added.

Sen. Gary D. LeBeau, D-East Hartford, who is retiring in January after 22 years in the legislature, had pitched a solution three years ago to no avail: convert to a unicameral legislature.

Instead of employing 151 representatives and 36 senators, Connecticut should shift to one chamber of 60 full-time lawmakers.

LeBeau hadn’t proposed a specific salary. But he said even if the unicameral legislature receives a raise, overall salary costs could be greatly reduced.

The East Hartford lawmaker predicted that unless legislators compromise on this approach – or some other that reduces the number of lawmakers serving – the General Assembly will find it increasingly difficult to attract residents willing to serve.