Not quite the nominee, Tom Foley puts stamp on GOP 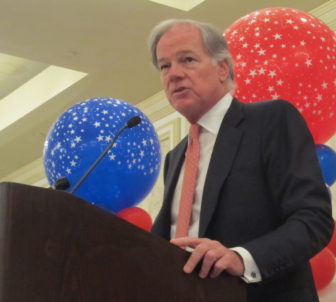 Tom Foley has to win a primary in August to be crowned the Republican nominee for governor, but he already is using his endorsement by the GOP convention last month as a mandate to assert control over the state party’s fundraising.

With an expectation to qualify for public financing, Foley has dispatched his finance director, Lauren Casper, to take over fundraising for the party in hopes of finding resources to expand the capabilities of the state GOP for the fall campaign.

By branding the party as an extension of his campaign, Foley is signaling donors to give to the GOP what they can no longer give to him as a publicly financed candidate. The strategy echoes Gov. Dannel P. Malloy’s efforts in developing a more muscular Democratic Party.

“I think it will be a lot easier for the party to raise money with people understanding that the party’s very much in sync with a campaign to win the governorship,” Foley said.

The Republican Party is more than a year behind a similar effort by the Democrats, whose fundraising has benefitted greatly from having an incumbent governor serve as rainmaker in chief.

Candidates participating in the state’s voluntary public financing program can accept contributions of no more than $100 and must abide by spending limits. The state parties can accept maximum donations of $10,000 and make unlimited expenditures.

In his second run for governor, Foley is showing a greater appreciation for the importance of organization in a close race. He lost to Malloy by half a percentage point in 2010, and the men have tied in two Quinnipiac University polls this year.

A six-way race for the GOP nomination is now down to two: Foley and Senate Minority Leader John P. McKinney face off in a primary Aug. 12. But Foley is not waiting assert control over the party organization, nor does he see any reason why he should.

“Up until the convention, the party should and must remain neutral,” Foley said in an interview with The Mirror. “Once the party endorsed a candidate, it’s no longer neutral. It’s made its choice.”

“We don’t have the luxury of waiting until late August. The thing about politics is that the calendar shows no mercy.”

In addition to Casper taking over fundraising, Foley also has sent another top campaign aide, Sean Cleary, to the party headquarters in Hartford. Some Republicans say they expect him to eventually replace Elissa Voccola as the party’s executive director.

Jerry Labriola Jr., the state party chairman, initially hedged on the question of whether Cleary was set to become its new executive director, and he scrambled for middle ground on the question of party neutrality and Foley’s right to shape the party organization.

“It’s a work in the process. It’s not all set,” Labriola said of the organization changes.

But after the story was posted, Labriola was emphatic that Voccola would not depart: “Elissa Voccola will remain as executive director through the campaign — and beyond.”

Labriola said the organization being built now with Foley’s assistance would benefit whoever wins the primary on Aug. 12. Accepting the assistance of Foley’s finance director does not advantage Foley or disadvantage McKinney, he said.

“We have to make these moves without taking sides in a primary,” Labriola said.

But Labriola said no one questions the need to strengthen the party’s ability to support its candidates with a get-out-the-vote effort.  In 2013, Democrats reported total receipts of $2.1 million to the Federal Election Commission, compared to $528,498 for the GOP.

The GOP still lags the Democratic Party in fundraising, but it narrowed the gap in 2014. According to reports filed over weekend, Democrats raised $1 million in federally reported funds through May 31, compared to $454,702 for the GOP.

The campaigns of the major-party candidates for governor will be limited to general-election public financing grants of $6,500,400. But the state parties and independent-expenditure groups, including the Democratic and Republican governors associations, will supplement those budgets.

Labriola acknowledged some Republicans may be skittish about a gubernatorial candidate taking a strong role in party operations prior to the primary. But the Democrats expanded its staff of organizer last fall.

“We don’t have the luxury of waiting until late August,” Labriola said. “The thing about politics is that the calendar shows no mercy.”