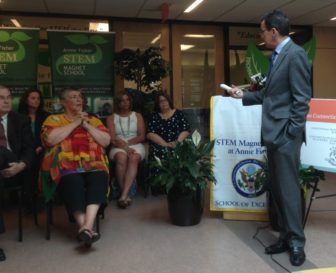 With cover from the state’s two largest teachers unions, Gov. Dannel P. Malloy on Thursday kicked off “Connecticut Core,” the administration’s latest effort to quell the political and policy clamor over how Common Core curriculum standards should be implemented.

The initiative is intended to implement the just-issued recommendations of the “Educators’ Common Core Implementation Task Force” that Malloy commissioned in March in response to a scathing review from the state’s largest teachers union, the Connecticut Education Association.

“Some people would rather concentrate on what divides us. I’d rather look at what divides us and find ways to bring them together,” Malloy said Thursday, addressing reporters at the Annie Fisher STEM Magnet School in Hartford.

Seated closest to the lectern were Mark Waxenberg, the executive director of the Connecticut Education Association, and Melodie Peters, the president of the next-largest teachers union, AFT Connecticut.

Connecticut Core will provide funding in support of the Common Core standards, including $10 million for school technology upgrades, $2 million for professional development for K-12 teachers and another $2 million to fund at least 1,000 training days for teachers.

The CEA called the initiative “a positive first step,” while the AFT expressed hope the recommendations of the task force will “serve as a foundation for an ongoing effort to identify and address challenges with the Common Core going forward.”

AFT Connecticut has endorsed Malloy’s re-election, but it also sponsored a resolution adopted by the state AFL-CIO that calls for setting credentialing standards for the commissioner of education, a tacit slap at Malloy’s commissioner, Stefan Pryor.

Two candidates for governor, Republican John P. McKinney and independent Jonathan Pelto, have called for the dismissal of Pryor, a co-founder of Amistad, a charter school in New Haven.

The AFT has pushed back on Malloy’s behalf, even as it signaled its desire for a new commissioner should the first-term Democratic governor be re-elected this fall. Aside from an endorsement of Malloy, the union also is fighting what it calls myths and misperceptions about Common Core.

Pryor declined to comment on the AFT resolution, and he attempted to sidestep questions about whether the election-year political focus on him impedes his ability to serve as commissioner. Allan B. Taylor, the chairman of the state Board of Education, watched the exchange with reporters and stepped forward to forcefully defend Pryor.

“The answer to your question is no,” Taylor told a reporter who asked if Pryor’s effectiveness was compromised.

The only education commissioners immune from political criticism are those who are planning their retirement, not pursuing education policy, Taylor said.

Pryor, he added, has the board’s full support.

In its report, the task force says its suggestions fall under the umbrella of five broad recommendations:

“These recommendations are intended to affirm and strengthen the good work currently happening in the state while providing a structure for districts that are not as far along with the transition to the new standards,” the task force said. “The implementation of these standards is ongoing, and it is clear that collaboration among all stakeholders is necessary for success in our classrooms.”

The task force membership, with the role of each member and their school district: