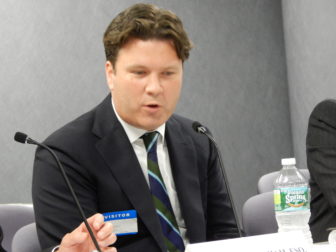 During a public hearing at the Connecticut Insurance Department, Anthem officials also cited federal fees meant to cover the cost of subsidizing people’s premiums and reduced federal risk protection for insurers as reasons for seeking to raise rates.

Customers, meanwhile, expressed outrage at the proposed rate hikes. In testimony and written comments, many described the premiums as unaffordable and expressed frustration with Anthem’s customer service, the health law commonly known as Obamacare and having had to switch plans when their old policies were canceled. Some questioned why Anthem needed to raise rates so much when health care spending has been rising at low rates. And some said they would drop their coverage if the rates increased.

It’s now up to insurance department officials to determine if the rates are actuarially justified — that is, if they’ll bring in enough money to pay members’ medical bills but are not excessively high or “unfairly discriminatory.”

Anthem’s proposal covers policies sold on Connecticut’s health insurance exchange, Access Health CT, as well as outside the exchange. The rates, if approved, would take effect in 2015. The company currently has about 66,200 individual-market policies.

Two other companies selling plans through the exchange have also submitted rate proposals. ConnectiCare Benefits Inc., proposed an 11.8 percent increase in its base rates, although how individual plans and customers would be affected varies. HealthyCT’s proposal calls for decreasing its rates by an average of 8.9 percent. That company’s rates are among the highest on the exchange this year. UnitedHealthcare also expects to sell individual-market insurance on the exchange next year.

In testifying that the rate proposals are justified, Anthem vice president Michael Bears said keeping prices down helps the company grow its business. “We are very motivated to be as competitive as possible,” he said. “We want the rate increase as low as possible.”

So why the proposed rate hikes?

Although patients’ use of medical services is growing at a slower rate than in the past, Bears said rising pharmaceutical costs require a higher premium increase.

In particular, Bears cited the emergence of costly drugs to treat Hepatitis C and a new state law that requires doctors to offer testing for the disease to patients born from 1945 through 1965. One drug, Sovaldi, cost Anthem $430,000 in May alone, he said. Another drug expected on the market later this year is expected to make treatment easier, which Bears said is likely to mean more people will seek treatment.

“It’s a good thing, but it is very, very expensive,” Bears said of the expected increase in testing, diagnosis and treatment.

Anthem’s 2015 rate proposal is not based on claims from this year’s individual market plans. But Bears said that recent claims experience in the market indicated that claims were slightly higher than anticipated in the 2014 rates.

Anthem’s filing said it anticipates that more people who are currently uninsured will buy plans in 2015, and that the company will have to pay higher-than-usual medical claims because of pent-up demand from not getting care for many years.

But Lombardo wondered why those people would not buy insurance this year, when people who don’t have coverage would have to pay a penalty.

Bears said the penalty will be higher in 2015.

Lombardo also suggested that one of the federal protections for insurers with high medical claims might not be reduced, as Anthem anticipates.

Lombardo is expected to issue a recommendation on the rate proposal to Insurance Commissioner Thomas B. Leonardi, who will issue a final decision.

Assistant Attorney General Thomas P. Ryan questioned Anthem officials on behalf of the state healthcare advocate, and raised questions about how many Anthem members would need Hepatitis C drugs and whether the federal government would help Anthem pay for large claims related to the medication. Ryan also asked Anthem for the number of current members who belonged to Anthem plans before this year, when customers had to pass medical screening to buy coverage.

Lombardo asked for Anthem to submit information related to those questions.

Because insurers are no longer allowed to deny coverage to people with pre-existing conditions, insurance companies had anticipated that people buying individual-market insurance in 2014 would be sicker than those who bought coverage previously.

But Actuary Philip Bieluch, a witness for the healthcare advocate, testified that although Anthem’s total individual-market membership had increased by about 5,000 people from 2013 to 2014, the number of claims submitted by members in the first quarter of 2014 was below the number from the first quarter last year. Anthem data suggested members had fewer doctor visits and other medical claims, as well as fewer hospital admissions, Bieluch said.

“The bottom line was I saw the population was increasing and the utilization is way down, according to Anthem’s numbers,” he said.

Asked whether those figures reflect a higher-risk population among Anthem’s current members, Bieluch said no.

Anthem officials did not respond to that analysis during the hearing.

Some of the public comments focused on whether the rate hike could be justified since inflation and health care spending have been rising at rates far below 12.5 percent. But many centered on the cost of coverage and frustrations with Anthem or Obamacare. And some people raised concerns about problems with their Anthem coverage. 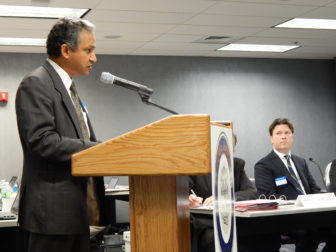 Arvind Shaw, CEO of Generations Family Health Center in Willimantic, asked that the proposal be rejected, citing the company’s problems processing claims and verifying that members are eligible. He said the health center has submitted 290 claims so far this year to Anthem but has only been paid for two of them, one incorrectly.

“This rate increase is excessive and people cannot afford it,” she said.

Arleen Block attended the hearing to speak on behalf of her 26-year-old son, who buys an Anthem plan that costs a third of his income. Block said her son, who works for a nonprofit, qualified for Medicaid but bought the plan because no specialists he needs within 20 miles of his home were covered by the program. She said her son has had problems with Anthem’s premium processing and prescription coverage, and said the plan is unaffordable to him now, even before any rate increase.

Written testimony reflected similar concerns. One, from a woman who said she was 63 and paying $910.08 per month for a plan with a $3,500 deductible, said she doesn’t go to the doctor because it’s become unaffordable.

“This was the cheapest policy Anthem had to offer and it’s not affordable now, never mind with such a high increase come January,” she wrote.

Sandra Wasch of Stamford wrote that she is paying $1,135 per month.

“I know I speak for many of our state’s citizens when I say that the ACA hasn’t been so good to us, and another blow like this could have devastating effects on our population,” she wrote, referring to the Affordable Care Act, the law commonly known as Obamacare.

One man, who called the proposal “unbelievable,” signed his comment “A very frustrated 34 year old, newly married, on a tight budget, trying to put away something for retirement but can’t afford to, working 70 hour weeks with no vacations, man from Connecticut!”

Another commenter questioned why the rate increase was so high since inflation is historically low and medical inflation has been far below 12.5 percent in recent years. The commenter expressed hope that the regulatory body ensures the premium increases reflect marketplace conditions.