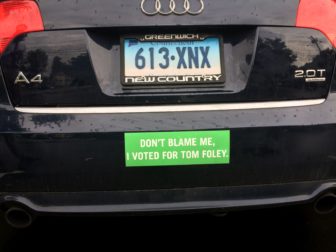 The bumper says it all.

Danbury – Tom Foley arrived for his latest listening tour in a black Audi A4 with a green bumper sticker that says, “Don’t blame me, I voted for Tom Foley.”

It’s cute, a little cheeky, even. But the sticker reflects a serious vibe that resonates through Foley’s second run for governor in four years: a belief that an ever-so-small majority of voters just plain got it wrong in 2010 by electing Gov. Dannel P. Malloy, not him.

Foley, 62, is intent on giving those voters a chance to reconsider this November. But first, there are the preliminary matters of John P. McKinney, their debate in Hartford on Thursday, a second debate on Aug. 10 and the Republican primary on Aug. 12.

McKinney, the leader of the Republican minority in the state Senate, is the only one of Foley’s five competitors for the GOP nomination to remain in the race. In a TV ad Monday, McKinney took swipes at Malloy and Foley, saying neither was willing to shrink government.

“It’s an odd way to introduce yourself,” says Foley, whose first ad reintroduced him to voters last week as, in the words of his wife, a “regular guy” and “a great dad, who would make a great governor.”

McKinney’s aggressiveness should not surprise. He trails Foley in the only public polls, and he has four weeks to close the gap. The debate at noon Thursday, which will be live-streamed by The Hartford Courant and aired Sunday at 10 a.m. on FoxCT, is one of only two before the primary. The other is four weeks later on WTNH, Channel 8.

Foley mentioned McKinney and the commercial only when the subjects were raised by the sole reporter accompanying Foley on what was to be a rain-shortened schedule of stops Tuesday in Danbury, where he had limited interactions with voters.

Foley says he is confident of a win in August, which he insists is not the same as taking the primary for granted. But he conceded his main target is Malloy, the Democrat who beat him by 6,404 votes of the more than 1 million cast, the state’s tightest race for governor in 56 years.

One measure of his November focus is that an urban agenda he says he developing from a continuing series of conversations with community leaders is unlikely to roll out until after the primary. The state’s three largest cities have few GOP primary voters. 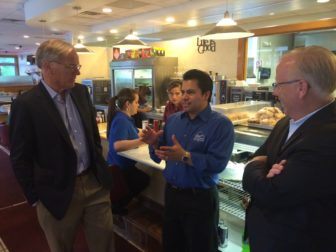 He first promised the agenda in September, when he announced his exploratory committee in a community center in Bridgeport, where the last votes were counted in 2010. On Tuesday, hours before Foley campaigned in Danbury, Malloy was in the same center at a community meeting on curbing violence with Mayor Bill Finch. Malloy returns to Bridgeport today for a transportation announcement.

In Danbury, what the Foley campaign called a two-hour “urban listening tour” began at The Barden Corporation, a maker of precision ball-bearing assemblies for the aerospace and medical industries. Foley was a few minutes late, the victim of a navigation program that insists that a steep, grassy hillside actually is a navigable path to Barden’s front door.

He arrived with a watery, bloodshot left eye and a tissue in his hand. Grace, one of his 2 ½ old twins, accidentally poked him in the eye the previous day, scratching his cornea.

It was the first of three stops at local businesses arranged by Mayor Mark Boughton, a GOP rival who endorsed Foley on June 18, the day he dropped out of the race. A walking tour of the downtown with Boughton was cancelled due to rain.

In 2010, he ended up as Foley’s running mate, a forced marriage arranged by GOP voters: Foley won a primary for governor, while Boughton won a primary for lieutenant governor. The mayor was widely described as not enjoying Foley’s company.

At Barden, Boughton met Foley with a handshake.

Their tour guide was Joe Brock, manager of the company’s Aerospace Business Unit. Brock politely resisted playing foil to Foley, who tried without success to steer the conversation to the shortcomings of Connecticut’s business and tax climate.

Boughton told Foley that the company, part of a closely held international conglomerate, the Schaeffler Group, nearly moved a decade ago over energy costs. 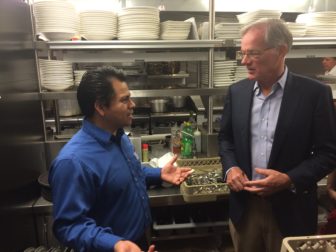 A question about immigration yielded no answer.

“It was close,” Boughton said. “The utility costs are driving these guys nuts.”

“What else is annoying about doing business in Connecticut?” Foley asked.

On the brief tour, Foley asked Brock if it was a union shop.

“Does that help?” Foley asked.

“I’ve never worked in a union facility, so I couldn’t say,” Brock said.

When it came out in conversation that Brock was from New Hampshire, a state without an income tax, Foley said Brock must miss his home state at tax time in April.

From Barden, Boughton led Foley to Elmer’s Diner, one of three restaurants owned by Elmer Palma, 40, a naturalized U.S. citizen from Guatemala. Palma is a Republican recruited by Boughton to serve on the city council.

“Everything started with a small business, and a dream,” Palma told Foley.

Palma said he employs 47 workers, which exempts him from the state’s law requiring paid sick days, whose passage Malloy features in his first campaign commercial. Foley calls the law a mistake, a hostile gesture to business.

“I want to grow,” Palma said. But he questioned if growth would bring profits or problems.

Up the hill from the diner is the Waterfall, an upscale restaurant Palma recently opened. Foley complained that the state treats businesses as piñatas, something he would stop if elected.

They stopped in a cozy upstairs bar, where the conversation drifted off message – to undocumented immigrants. Palma told Foley that providing drivers’ licenses would be a good, practical step.

A reporter asked Foley what he thought of Palma’s suggestion.