Today’s debate goals: If not a KO, then maybe a meme 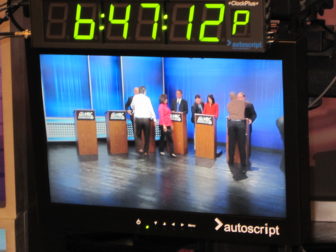 All eyes are on Hartford today, the site of the first televised debate since the Republican field for governor narrowed to two finalists, Tom Foley and John P. McKinney. It’s a chance for McKinney to pull even with the front runner or land a knockout punch.

The first thing to know about today’s debate is what it’s not. For most of Connecticut, it’s not must-watch TV. In fact, it’s not even on TV until Sunday at 10 a.m. on FoxCT. To watch it live, look for streaming video at noon at courant.com or foxct.com. There will be no seating for the public.

American politics is replete with memorable, even game-changing moments at presidential debates. Gore sighed. Bush glanced at his watch. An elderly Reagan deflated the age issue by promising not to make an issue of his opponent’s youth and inexperience.

Gubernatorial politics? Not so much.

In 2006, a few months after the founding of Twitter, Gov. M. Jodi Rell froze when asked about her biggest mistake. She had nothing. It was an awkward moment, but nothing capable of generating buzz. It didn’t go viral, even by the standards of ’06. Rell left as she arrived — as one of the most popular governors in the U.S.

So, as the political consultants always do on behalf of their clients, let’s lower expectations.

“Everybody always goes to a debate looking for that knockout punch,” said Roy Occhiogrosso, a political consultant whose clients include Gov. Dannel P. Malloy, the Democrat awaiting the GOP winner. “It’s hard. It’s hard to outright win a debate. You can do better than the other guy, but win?”

Why is it so hard to score in a debate?

For one thing, the audience will be small, and anyone already dialed into a GOP primary campaign that only recently generated TV commercials is less likely to be undecided. Scoring big in a debate requires having a persuadable audience.

In 2010, when there was both a U.S. Senate and gubernatorial nomination fight to draw voters, the turnout in the GOP primary didn’t quite reach 30 percent. In raw numbers, that was just 124,754 voters.

Is the debate more important to one candidate?

Oh, yes, McKinney is the leader of the Republican minority in the state Senate, but he badly lags Foley in name recognition. We haven’t seen a public poll in months, but there’s been little to change things.

“In general, McKinney has relatively few opportunities to do something and get attention from the non-activists,” said Fergus Cullen, a former Republican political consultant. “What he really has to do is get earned media.”

That means make news at the debate.

And not just any news. Since the audience will be relatively small, McKinney needs something that either the news media or social media will amplify. Generally speaking, that means inducing Foley to make a mistake, not McKinney making a clever point.

“The only thing that will move the needle is if a candidate makes catastrophic mistake, and it goes viral on social media and creates a meme in some way, shape or form,” said Rich Hanley, a journalism professor at Quinnipiac University.

In November 2011, the Texas governor said during a debate televised on CNBC that he was ready to get rid of three federal agencies. Trouble was, he could only name two. CNBC isn’t exactly a prime-time powerhouse, but the gaffe grew on YouTube, Twitter and Facebook, then got a new life on comedy shows.

Easier said than done, but we’ll let Cullen answer that one. Get ready for a couple of shifts in sports metaphors.

Foley is likely to be “more defense minded than offense minded, more intent on not trying to make a mistake than deliver a knockout blow,” Cullen said.

How does one do that?

Hanley can explain, and he doesn’t need a sports metaphor.

“It’s best for a candidate to be like drywall,” Hanley said. “You’re just there. That’s unfortunate, but it’s the reality.”

Well, we know Malloy isn’t planning on watching, at least not live. At noon, he is holding a press conference on school safety in Wethersfield.

They are a chance to watch the two candidates side by side. Each will come with talking points, but debate still provide an opportunity to see candidates in a relatively unscripted event.

If nothing else, Hanley said, the debate is an opportunity to rally supporters – and remind the GOP electorate there is a primary on Aug. 12.

“It’s not an empty experience, by any means,” Hanley said. “But it’s not going to bring people into the tent.”

So why do them?

There is a risk in ducking debates.

“This is part of the theater that our democratic process has. Everyone knows these debates won’t move the needle, but everyone says you must participate,” Hanley said.

In 2010, Malloy hounded Ned Lamont over his refusal to debate over the last weeks of the Democratic primary. At the time, Lamont was leading in the polls.

“It became a narrative in the campaign,” Occhiogrosso said.

Anything else to look for?

Well, Foley has a scratched cornea. His 2½-year-old daughter, Grace, accidentally poked him in the left eye Monday. If McKinney suddenly circles to Foley’s left, maybe he is going for a knockout.