Malloy says ‘no’ to immigrant kids, but others in Connecticut say ‘yes’ 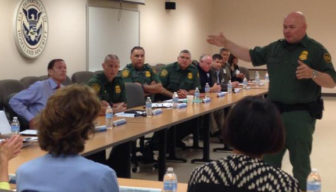 Sen. Richard Blumenthal, seated at left, tweeted this photo of him hearing from U.S. Border Patrol officials during his visit to the Texas border Friday.

Washington – Saying Connecticut does not favor institutionalizing children and that the state has no suitable facilities to house them, Gov. Dannel Malloy on Friday firmly shut the door on the possibility the state would help the federal government find temporary homes for some of a flood of immigrant children from Central America.

But that does not mean others in Connecticut are not ready to help.

Several non-profit agencies in the state are also eager to apply to help the children.

Under federal law, thousands of unaccompanied migrant children, mainly from Honduras, Guatemala and El Salvador, are under the care of the Department of Health and Human Services, which has run out of room to properly house the kids.

Sen. Richard Blumenthal, D-Conn., who flew to San Antonio, Texas, to meet with officials and review the situation first hand, tweeted Friday that “Seeing children crowded in cement cells —[is] nothing short of a humanitarian crisis.”

The HHS Office of Refugee Resettlement has put out a request for bids on a $350 million contract offered to states, including Connecticut, city governments, school districts, nonprofits, county governments and others, who are qualified and “licensed by an appropriate state agency to provide residential, group, or foster care services for dependent children.”

“They are looking to get the biggest bang for the buck,” said Angela Andersen, executive Director of the International Institute of Connecticut.

Her organization does not provide residential services, but she said other nonprofits that do provide such services in the state are considering applications to the Office of Refugee Resettlement Program before an Aug. 5 deadline. 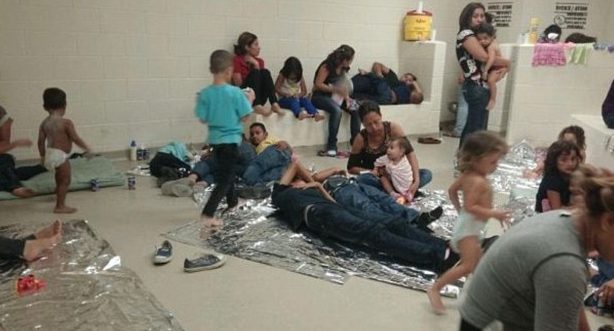 Meanwhile, the Malloy administration on Friday responded to a letter from state Rep. Juan Candelaria, D-New Haven, who urged the governor to find a place to house the kids.  Malloy had rejected a federal request to place up to 2,000 migrant children in the Southbury Training School.

“We cannot keep our arms crossed while these detention centers continue to overflow and these children suffer in the direst of conditions through no fault of their own,” Candelaria wrote.

The Malloy administration responded that the state’s  Office of Policy and Management determined “all vacant properties owned by the State were found to be either far too small to accommodate the needs of [the General Services Administration] and  HHS, were not ADA or NEPA compliant, and/or they contained mold, asbestos, lead, or other serious problems which would require extensive renovation before they could be occupied (especially by children).”

“The State of Connecticut simply does not own appropriate facilities that can accommodate these needs,” the administration’s office concluded.

It also said the Malloy administration would work with the federal government to “facilitate, where possible, the temporary placements of individual unaccompanied minors who have family relations in Connecticut and help other families in the state who have expressed an interest in helping the children.”

Candelaria said he was glad the administration responded so quickly to his letter and gratified that it spelled out all of the problems it encountered trying to find facilities that would meet federal requirements.

“It puts me a little more at ease,” he said. “The next step is for us to identify other cities that have facilities that are available.”

Lugo said other governors, including Deval Patrick of Massachusetts and Peter Shumlin of Vermont have agreed to take in some of the immigrant children.

“How is Connecticut different?” Lugo asked.

The influx of unaccompanied children, which could reach 90,000 by the end of the summer, has proved a political headache to President Obama, who has invited the presidents of Honduras, Guatemala and El Salvador to the White House next week.

Obama has also asked Congress for $3.7 billion to address the crisis and a change in current law aimed at protecting unaccompanied child migrants so he can quickly return those without valid immigration claims to their homelands.

But a fractured Congress cannot agree on the amount of money that should be appropriated or whether or how to change the law.