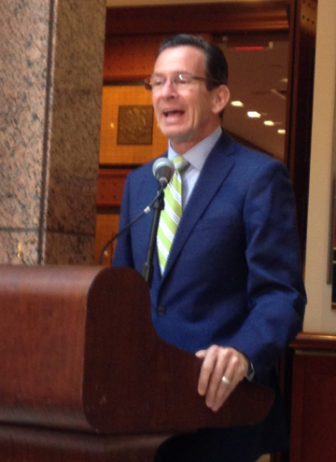 Gov. Dannel P. Malloy was skeptical Friday that a former community college building in New Haven would be of any help to federal officials looking to house thousands of migrant children in Connecticut.

The governor – who noted earlier this week that the Gateway Community College structure was being reviewed – said it never was targeted as a possible residence for the children.

That building, which now is under the auspices of Southern Connecticut State University, “probably doesn’t meet what they [federal officials] are looking for,” Malloy told reporters following Friday’s State Bond Commission meeting in the Legislative Office Building.

The former Gateway building lacks sprinklers and has inadequate windows, the governor said. And when asked why — given his skepticism — state officials referred it to federal authorities who were seeking temporary housing for migrant children, Malloy responded, “I’m not looking at that site for any reason.”

But just three days ago, after being publicly chastised by several groups for not fulfilling a federal request to house up to 2,000 migrant children, the governor issued a written statement that vaguely referred to the Gateway property as part of a multi-pronged assistance effort.

The governor wrote that he directed state agencies to help federal authorities place children with relatives here, “and to work with federal officials in an appropriate fashion should any additional needs arise or should they make additional requests.  That would include exploring the Gateway property.”

It still was unclear after Friday’s press conference what the Gateway property was under consideration for, or why it had been referred to federal officials in the first place.

The Mirror first reported Tuesday that the state Office of Policy and Management denied a request from the U.S. General Services Administration to house up to 2,000 of these children at the Southbury Training School, a facility that serves patients with intellectual disabilities.

The GSA asked that approximately 90,000 square feet at Southbury be made available for six months to a year. In an email to the state, it wrote that the need for housing was “urgent” and that the federal government would cover all living, medical and maintenance costs.

But in a July 15 response to the federal agency, an OPM official wrote that the aging school’s condition, the sensitive nature of caring for the developmentally disabled clients already there, as well as several legal and procedural hurdles, prevent Connecticut from assisting.

But the governor reiterated Friday he believes the approach federal authorities took to this crisis was incorrect.

“I have said this routinely to federal officials,” Malloy said. “I do not believe that we should be warehousing or institutionalizing children.”

Placing them with family members “is the right way to go,” he added.

Still, since the administration’s initial denial was reported, the governor has received appeals from leaders of the state legislature’s Black and Puerto Rican Caucus, the state’s Latino and Puerto Rican Affairs Commission, and from other groups, to find housing.